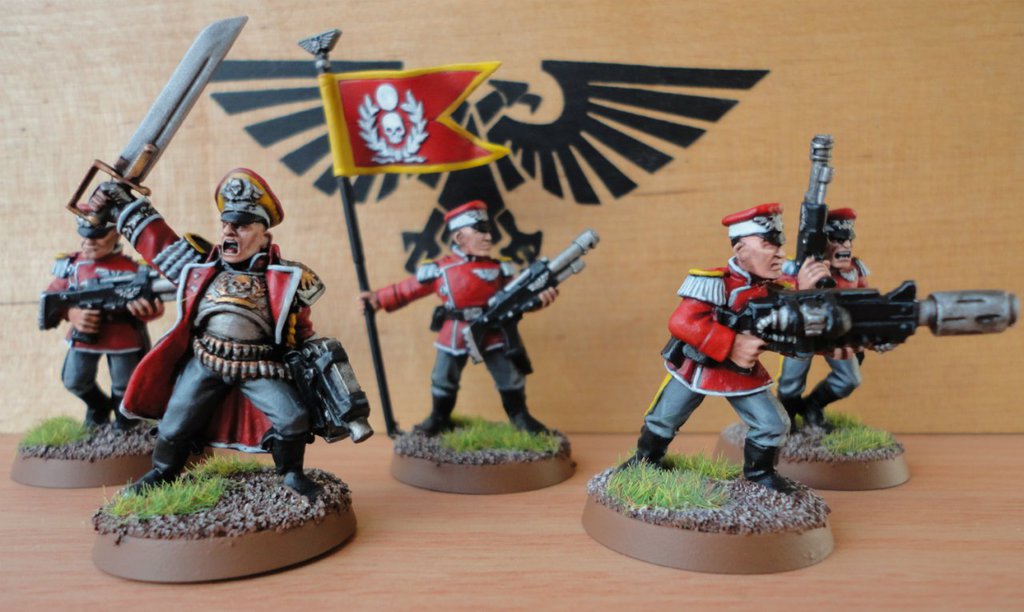 The story of how this particular squad came to be is something of an epic. They've been languishing unpainted for a very long time, to the point that the guy at the back with the banner actually predates my PC by a few months. What you can't see under the layers of paint is my blood on him; I slashed the tip of my thumb with my knife while shaving the edge of his sleeve flat to take the hand holding the banner.

The officer's sword is converted, too, from the same Catachan command squad. I've tried to make it look like he's got his fist in a locking gauntlet. Ideally I'd have done something with the bolt pistol at his side, but the row of bolt shells around his waist makes it difficult for him to really be carrying anything other than a full-sized bolter. Oh, well.

The colour scheme is inspired by the famous 'Wrath of Khan' Starfleet uniform, though without the same number of variations in tone and hue for their collars. I'd originally considered trying different coloured piping on their jackets for different roles - sergeant, special weapons, medic and the like - but it looked chaotic and confused, so they were repainted white and I think it looks much better.

Luckily for my sanity there are no mixes anywhere on these guys. I was aiming for bright, primary colours which meant I've been able to use everything straight out of the pot (with a little water added, of course!) rather than having to fuss and struggle with getting a mix right over a whole platoon of infantry.

The full sized version of this image and individual shots of each of the command squad are available here: http://imgur.com/a/sxKLp#0