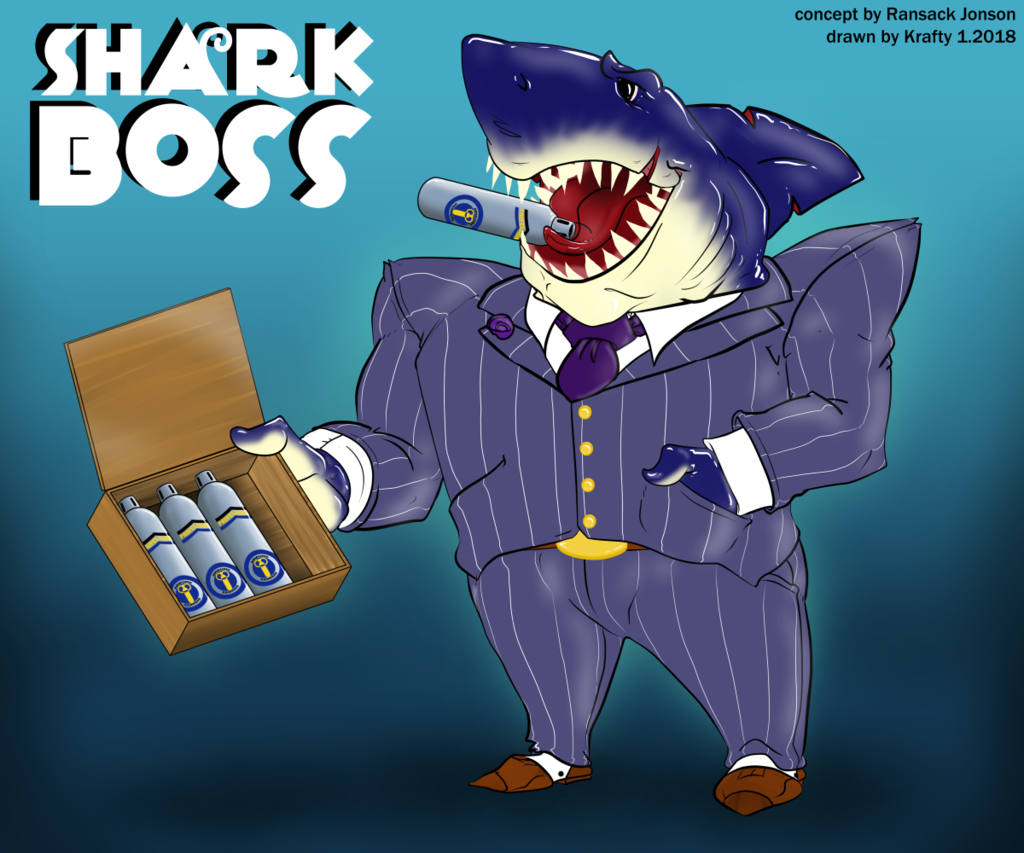 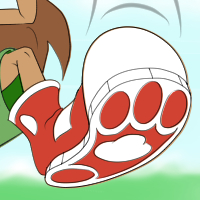 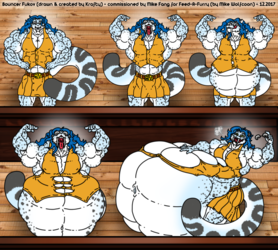 So my friend heard a nugget of trivia during Shark Week that made this idea congeal in his brain meats. For Xmas I extracted it carefully and dried it out so you can all enjoy... X3

"Cigar?" The monster in a pinstripe suit opens the wooden box with three air tanks left. Placing one between his teeth he holds it there effortlessly.

Declining the offer, a man with sea-scoured features removes his battered hat. He affects a supplicant posture in the seat across from the looming beast and let's out a breath he's been holding for hours. "We're gonna need a bigger loan." The grizzled fisherman stares into the glittering doll's eyes across from him.

"I see..." The dapper banker rolls the end of the air tank in his toothy maw, his gaze aimed nowhere in particular as he seems to consider this for exactly as long as would be polite for both the contestant ... and the cameras. "Well, per the rules of 'Shark Boss,' you ARE allowed to try for a bigger loan..."

The fisherman does his best to hide the beginnings of a smirk. He's coiled tight as a spring, sweating under the weight of his efforts at maintaining a civil decorum before his lifelong nemesis. Leaning pitifully on his well-loved rifle like a walking stick, he tries not to make eye contact with that bastard.

"Might I remind you, however, you've run out of collateral. I already have your boat, and even that thrice-mortgaged kludge strains the definition of equity." His huge, deadly craw twitches at one corner, mocking the fisherman openly with the kind of cool subtlety and control this rough sailor has never known. "Alas I can see no reason to approve even this loan, now that I've had time to mull it over."

He casually reaches down to unlock the desk safe where he keeps his official seal. "Alas, I'm afraid I must decli-"

As soon as the lock is sprung, so too is the fisherman's trap! "Smile you son of a-" BLAM!

His rifle strikes true, the bullet hitting the end of the canister in the loan shark's jaws dead-center.

"I am smiling..." The sad hiss of escaping air dwindles to nothing in a matter of seconds. Unflinching, he continues grinning greasily and stamps the loan proposal before him, remanding the Fisherman to leave the show penniless & humiliated. "... because I know shooting an air tank won't make it explode. Your loan is denied. Thank you for playing Shark Boss. Good day, sir."