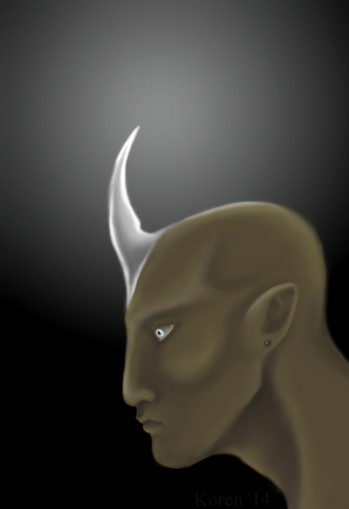 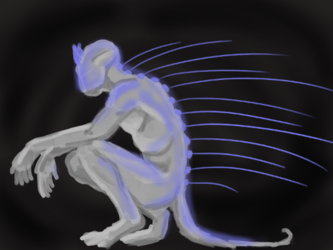 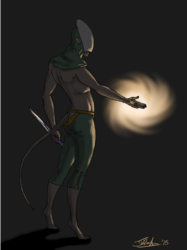 My God, Komarii for a WIP RP forum I'm working on with a friend.

"As one of the two elder Gods, Komarii is known for his reign over the elements of Water, Earth, Darkness and Death. He is the patron god of the Druids and has a temple in their capital of Oakton. Many leave offerings for him at graves so that he may guide the souls of the dead into the next life.

Many associate Komarii with the strange, twisted and queer creatures of the world, such as insects, octopuses and spiders. His symbol is the inverted triangle filled with three circles, each to represent his three sacred names. To utter these names is to lay a curse, whether it be on a place, person or object. Dadrum, the first, is to corrupt a thing until it is no more. Jorum, the second, is to drive the mind insane. And Meerum, the third, is to plague a place until no life is able to exist there.

Despite his dark and sometimes fearful reputation, Komarii has been known to bestow his favor on the pious, leading them to forgotten treasures or giving them a familiar in the guise of a cat or a raven. It is also said that the dark God stays death for those who wear pendants of silver and onyx, protecting them for dangers that would otherwise send them into his embrace.

In the rare events that Komarii has walked Tariom, he has been reported to take the form of a young human man, his eyes as white as ice and skin as grey as ash. In one account, he bore a single spiral horn on his brow and had the tail of a cow, much like the fabled horned horses of GreenHaven."