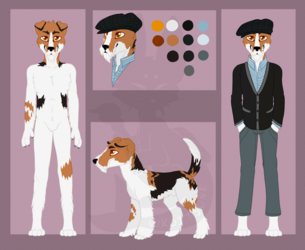 Say hello to the Koitsune/Koi-Fox

This small Amphibious Fox is always out to take anything and everything, most often hoarding expensive goods such as jewelry, precious stones, and other shiny and enchanting items. If a human catches them in the act of stealing something, the Koitsune will try it's best to break that object. One can only assume they do this out of sheer selfishness, following a "If I can't have it , no one can" code of conduct. If this is not the reason, it could easily be a method of distraction as well, to allow it a chance to escape danger while the predator 'mourns' over their broken treasure. Koitsune's are usually considered vermin, though some people will leave offerings of trinkets and treasures for the creatures, to appease their hunger, and prevent the critter from stealing things of more importance.

But even vermin can be made into a well desired pet. Some Koitsune have been partially domesticated, and the biggest goal that humans have for them is to breed out their destructive nature with shiny objects, sadly there has been no success in this endeavor and it is usually recommended these creature be kept in their own separate habitat/rooms that contains safe objects of their interest..

-Koitsune lay eggs.[They can lay up to 4 at a time]

-They cannot resist the offer of food, and will boldly approach anything or anyone that may be offering it.

-They are intelligent, some more then others but this intelligence doesn't change their instinctive desire to steal and collect treasures.

-On occasion they will steal articles of clothing or fabrics, usually to place in a nests, and sometimes to wear for themselves.

-They are always upright, and only drop to all fours when in need of a hasty escape.

-Some will wear masks, and other accessories.

-These creatures cannot naturally be any color. They can only share colors with Koi's and or Foxes/Other Vulpines. With the exception of Domestic Koitsune who often go through excessive breeding processes for a desired trait or color.

-Koitsune guard their treasures quite viciously, and will often fight off others that threaten their hoard.

-Relationships between Koitsune involves the exchanging of gifts, and the combining of treasures. Koitsune will show off their treasures to a male and or female of interest in order to show off their thieving skills and assure that they will shower the other with gifts efficiently.

-When Koitsune are bonded they will steal for eachother over themselves, but sometimes one may provide more then the other.

-Female Koitsune can be much more finicky then males, often seeking the best and 'wealthiest' suitor in hopes of being showered in gifts.

-A Common folktale about these creatures is that they are all the descendants of a greedy demon fox who'd wronged an incredibly generous and wealthy Koi-fish, and in turn the gods cursed the Fox and all it's descendants to forever be riddled with greed.