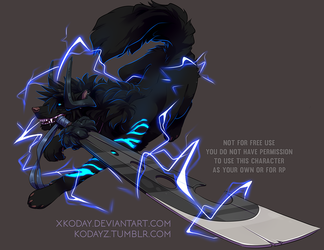 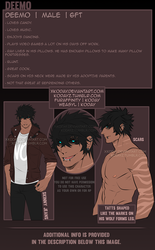 You may NOT use my characters or my art for your Roleplays.
You also may NOT copy, steal, trace, heavily reference, or alter my art in anyway.
Do not repost/upload anywhere without my permission.
Please respect my art, thank you!

Deemo doesn’t know his parents, him and his sister were abandoned at only a few weeks old. They were adopted by another pack of their species and they were very much loved and spoiled by their adopted parents - at least until they got older. Once they hit their pre-teens their parents were getting more and more abusive as months went by. Their adoptive parents finally had their own pups and eventually completely ignored Deemo and his sister, didn’t even feed them (And this is why he hates kids now) . Deemo eventually took Ink and they ran away from the pack, they were on their own for many years.

Deemo is a King, but he joined a clan called the Noto which already had a leader, so he was given Knight rank and he was hella loyal. Deemo doesn’t like telling others what to do so he didn’t want to lead anyone, thats why he was okay with being a Knight as long as he got the attention he deserved. A King protecting a King not of their blood was a rare type of situation in their species, but it didn’t bother him and he was good at it. No one could touch or even get near the Noto clan’s King with Deemo around. He was un-defeatable.

However, years later he left the Noto Clan with his sister. He didn’t like being told what to do at all, the only reason he joined in the beginning was to get his shit together and keep Ink somewhere safe while he did so. When he left though, the clan King was not happy at all and now Noto Clan are always out on the lookout for Deemo and his sister, hunting them.

Deemo wants his sister to have the best life ever, the comfiest one possible, he wants her to have whatever she wants, and to be safe and happy. (Thankfully she didn’t end up to be a spoiled brat). So without a clan and danger lurking around every corner, he had to find a way to make this all possible and such a thing was hard with the world they were living in - humans did not like his kind. The only things Deemo was good at was fighting and, well, getting laid. So he started working at a highly expensive and luxurious brothel - celebrity status place if that makes better sense ('Cause why not? Lol). He’s paid extremely well, absolutely loves the attention he gets there, and his sister now lives in an expensive penthouse which he visits frequently.

I know someone's going to ask 'How is he in a brothel when humans hate his kind?': Well, he has a human form to blend in, he can make his horns vanish, and he lies and says he wears colored contacts when people question his weird eye colors with the blue and black.

Deemo is still being figured out, so if you ever see this image pop up again in your inbox, it's cause I updated him more o3o, not his design but he himself and his story.