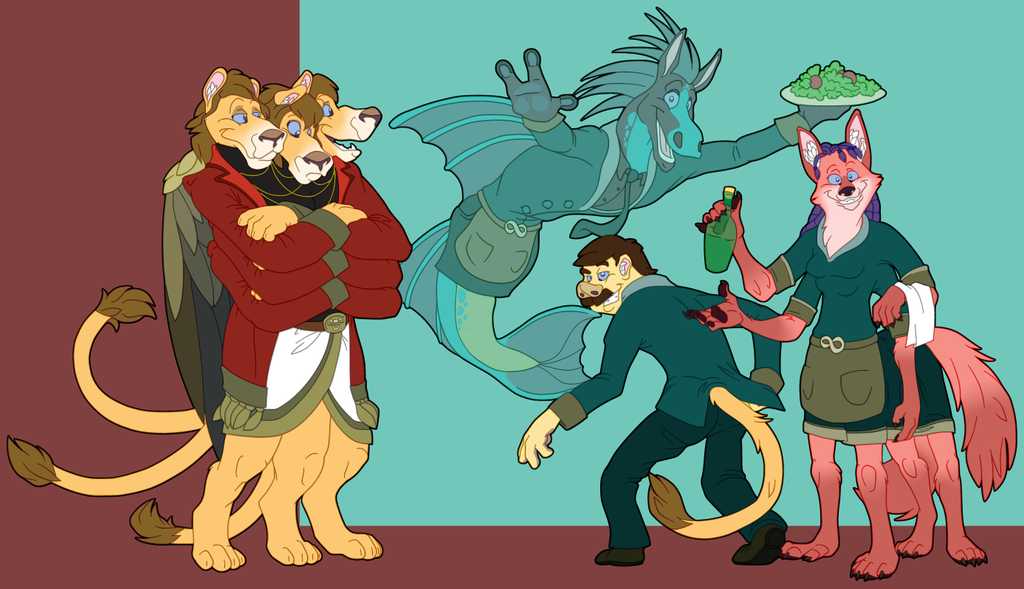 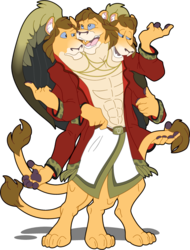 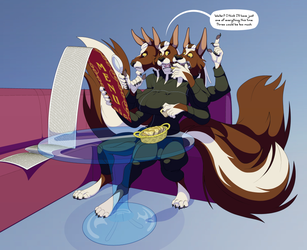 Isky (his real name is unpronounceable), hippocamp, male (we think), head of the aquatic section of the restaurant.

Nineteen, coyox (coyote/fox hybrid), female. The only thing more amazing than her encyclopedic knowledge of wines is the way she opens the bottle. The unusual body type was somewhat inspired by some of

Let's start from the beginning: after God created the universe, he sent Wiighra to Earth to act as Director of All Things Edible. He taught humans and animals how to hunt and gather food, which foods were safe to eat, how to prepare food, and which orifice to stuff food into (raccoons got it in 3, humans in 12). He ended up liking the food on Earth so much that once his job was done, he decided, rather than return to the Almighty's Space Camp, he'd stay on Earth, build himself a palace, and establish a restaurant and culinary school. The school and restaurant are, to nobody's surprise, the best in the universe, nearly impossible to find, and even harder to get into.

The restaurant is called “Infinity Bistro”, where the bottomless cup of coffee is not just cleverly named. From the outside, it looks like a seedy dance club called “Club 8”. The music is as loud as it is awful, and no human beings have ever been seen entering or leaving. If you're brave enough to pass through the front door, you'll find a foyer where the walls are decorated with ultraviolet dancing animals, musical notes, atomic whorls, and a splatter of something you probably shouldn't touch. There is a large, black door, featuring a black disk adorned with the number 8. This door leads to the club. However, if you have your reservation, look on the wall for the horrendously dressed lion in the cliché disco-dancing pose, and stick your reservation in its mouth. Don't worry, it'll go in. An androgynous, disembodied voice will bleat, “please prepare for gravity adjustment…gravity adjustment commencing in 3, 2, 1…” The room will begin to rotate sideways, and as it turns, the gravity inside the room will turn likewise. The gaudy paintings on the wall will melt away as oak panels and brass trim happily displace them. The offensive techno noise will give way to the soothing sounds of a string quartet playing selections from “Sgt. Pepper”, “Dark Side of the Moon”, and Sum 41's “Does This Look Infected?”.

When the room stops turning, the 8 on the door will have become an infinity symbol. The strange voice will then announce, “gravity adjustment complete. Welcome to–” An impossibly enthusiastic waiter will swing open the door and shout, “INFINITY BISTRO”, setting in motion a Sondheim-esque musical romp full of puns, musical counterpoint, slapstick, self-deprecating lyrics about the pretentiousness of the whole thing, and of course, a dancing wait staff in lion masks and tails. Take your seat, take your menu, take your Tums, things are about to get awesome.