[story] How it ends... by KittyRedden 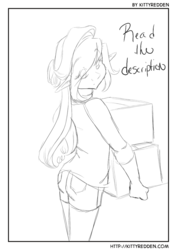 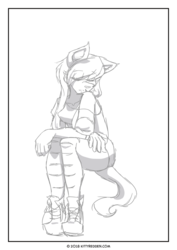 Hey guys, sorry it took so long to get this to you. I’ve had zero creative drive lately. But yesterday and today, it just flowed. Originally, LAR was going to go on for years with a wedding and kiddos and junk. But after the breakup with my ex, this is how I rewrote it. It’s mostly just an overview, with some more specific scenes in there that I’d already written. Anyway, this is the rewrite I did…

The act five side story was going to be a shortened version of act zero. Originally, it was planned to be a whole act following Jaska from leaving Nix Velox (his village), through to the beginning of act one when they were thrown onto the boat. It would cover his journey south, meeting Catlin, his transformation, and the torture he was put through while waiting for the ship that would take them to Paello Isle. Instead, I shortened it down to a 7 page side story.

Here is the overview:

A little older: Watches father skin an animal; Asks why they kill animals

Teen Jaska: Thanking recent kill for its sacrifice so that his people may live

Journey to Vinea: Joking with companions; Teasing his little brother

**Saving Yannick from the bear

Jaska wakes from his dream**

Over the course of the next few acts, Jaska would run into Torin more frequently, even to the point of meeting her wife. When he is out with Tonya and they meet up, Tonya gets easily angry and jealous of how flustered both Torin and Jaska are around each other.

Torin on the Bridge

T- -waiting on a footbridge in the park, staring down at water; thinks about Jaska; flashes back to dreams; grips her hair- Get over it, Tor! It was just a stupid dream!
W- What about?
T- Oh, nothing. Just a nightmare. Been bugging me all day.
W- Wanna talk about it?
T- No, I’m fine.
W- -frowns-
[/end scene]

One day, when out with Presley and Summer, Jaska runs into Torin and Summer invites her to their next dinner party.

At the party, it is obvious that Torin’s wife is not well. She seems extremely tired and Torin takes her home early, but she is pleasant to be around.

Jaska gets on well with Lana and Brandon at his new job. Brandon (being in a wheelchair) mans the monitors while Jaska and Lana do rounds. With absolutely NOTHING happening on the night shift, the pair get up to mischief.
Here are a few examples:

L- -standing in doorway of security office- Bran, tell us who passes the door first.
B- K…
-Jaska and Lana take off running-
-speedwalk thru science lab as not to break anything-
-Jaska runs thru basement; Lana noes the fuck out-
J- Hey! That’s cheating!!
L- -on stairs; jumps banister, cuts J off- Twelve years of gymnastics, bitch!
-both run past security office door; walk back panting-
L- So, who one?
B- Unlike you two, I was working.
-J and L stare at monitors for a moment-
L- There is literally NOTHING happening! You couldn’t have looked away for two seconds?
B- Nope
L- -throws hands in the air; walks away-
[/end scene]

B- -into radio- Hey, need one of you to check the basement. Something fell over.
L- -thru radio- Not it!
J- -thru radio- Okay, I’ll do it.
J- -enters basement, looks around, comes to a set of doors chained and locked; shines light on doors, illuminating the words painted on them in red- Don’t dead… Open inside… That makes no sense. -over radio- Hey, what’s up with the writing on the doors?
L- Oh… that’s… don’t worry about that. That’s just the furnace room. Charlie, the last night guard, he did that. Big zombie movie fan.
J- -thought bubble- The fuck’s a zombie?
B- Keep going, over by the old computer stuff.
J- -stares at door for another moment, then continues on. Finds downed item. Nothing else is out of place, no one else in basement-
[/end scene]

Brandon warns Lana about flirting too much (in her own way) with Jaska. She denies it, then admits that she is flirting, but it’s just harmless fun and that she doesn’t like him like that.

Catlin goes through a string of jobs, not making it past the training period.

Both Tonya and Arthur express jealousy and suspicion regularly about Catlin and Jaska living together. Neither are pleased that Jaska is supporting her. Arthur never offers to help.

Between Jaska’s protective nature around Catlin and how flustered he gets around Torin, she ends things with Jaska.

One evening, Jaska and Catlin are hanging out on the fire escape and Jaska kisses Catlin. Unbeknownst to them, Arthur is on the street below and sees them. Arthur gives her multiple openings to tell him what happened, but she acts oblivious.

Arthur gets a job offer back in his hometown. He invites her out to dinner, but keeps hesitating all night. The following morning, he finally tells her about the job, then invites her to go with him, then he offers a ring.

Catlin is stunned. She doesn’t know what to think and at 19, she definitely isn’t ready. She doesn’t want to leave her friends. Arthur accuses her of being in love with Jaska, of seeing her on the balcony with him. Finally, he tells her to get her stuff and get out and he storms out of the apartment.

Catlin gathers her things, leaves her key with the doorman and goes home.

Jaska returns home from work to find a note from Catlin saying that she needs time to figure things out. Her room is empty, but for the furniture. [/end act]

The next side story opens with Catlin waking up in bed with Gypsy. What was supposed to be a few nights on the couch that turned into a one-night rebound turns into a full-blown relationship. Catlin falls for Gypsy hard and Gypsy adores her.

When a job opening comes up at the coffee shop, Gypsy recommends Catlin to her boss, but like all the jobs before, it doesn’t go well.

One day, Jake (rabbit) asks Summer how Catlin is doing and she says “Last I heard, she hooked up with a girl at the coffee shop.” He furiously blushes at the idea.

Catlin chances to run into Jake in the market. Coffee becomes a regular thing between the two.

Being single and still very possessive of Catlin, the more Jaska thinks about her out there being happy with another girl, the darker his thoughts get.

Summer comments that they haven’t seen Torin in a while (with a joke in there about how she can never remember Torin’s wife’s name – hint: she is never given a name).

At Gypsy’s urging, and an invitation from Summer, Catlin and Gypsy attend a dinner party. The evening goes well, everyone enjoys Gypsy and Catlin is encouraged to spend more time around her friends again.

Exposed to this new version of Catlin, Jaska doesn’t like who she is becoming. He confronts her about her behaviour.

A season goes by.

G- I love you and I know you love me but I think there’s someone else.
C- What? No! Of course not!
G- Sweetie, it’s the same person it’s been since day one. You just need to see that.
C- So… you’re breaking up with me?
G- Yes. I love you so much, but I’m not the one. I’m just your rebound. Now you need to figure out for yourself who it is and go get them.

Catlin goes to Summer and Presley with all her stuff.
[/end scene]

Winnie tells Catlin of an opening at the library. Catlin imagines that scene that takes place in every movie with a library where the bookshelves domino, but she’s trained to reshelve books and run the front desk. It’s not enough to afford her own place, but it’s enough to live off of. She moves back in with Winnie.

Jaska has a prophetic dream, wakes up confused, looking at the empty space beside him. Gets up, throws on clothes, runs out into the rain.

Finds Torin standing on the other side of a bridge railing.

J- Torin!
T- Just go away!
J- No! What the hell are you doing?
T- I can’t do this. She’s gone. I can’t…
J- What?
T- She’s dead!
J- Torin, don’t do this! What about everyone else? Everyone you’ll leave behind? Don’t you know how much that will hurt them?
T- I don’t care. None of that matters.
J- What about me?
T- -looks at him-
J- If you do this, do you have any idea what that would do to me? I know it hurts. It will never stop hurting. You’ll always miss her, and you don’t feel like it now, but you will learn how to live without her. You’ll get stronger everyday so it will hurt a little less. Torin, please. You are so important to me.
T- -lets go of the railing to cover her face and cry-
J- -grabs her and lifts her over the railing to safety-

Jaska sits with Torin through the night until she falls asleep, carries her to Catlin’s old room

T- -wakes, goes to Jaska’s room-
J- -wakes at the sound of the door-
T- Sorry, I’m gonna…
J- -pulls back the covers- Come on.
T- -sniffs, hurries to the bed and climbs in, falls asleep cuddled up with him-

J- -wakes to find Torin watching him- Hey…
T- Hey. You must think I’m crazy.
J- No, I think you’re hurting. When my mother died, I was lost. My father didn’t know how to help. He had my little brother and a new baby to see to. He didn’t know how to help me. Mom was the only one who understood me and life without her was impossible, but I got wrapped up in helping my dad and learning my trade and one day I realized… it didn’t hurt like it used to.
T- -strokes his cheek, kisses him-
J- Torin… I don’t think…
T- -climbs on top of him- You’re important to me too.
[/end scene]

Things begin to wind down at this point between characters.

Catlin walking through the market. Sees Jaska with Torin out shopping. Sighs.

Cy- Oh, sorry.
C- -watches him go-
R- Hey, are we going to the Valkyrie tonight?
Cy- Still hoping to figure out what that was in the shark head?

Catlin continues to the cafe.