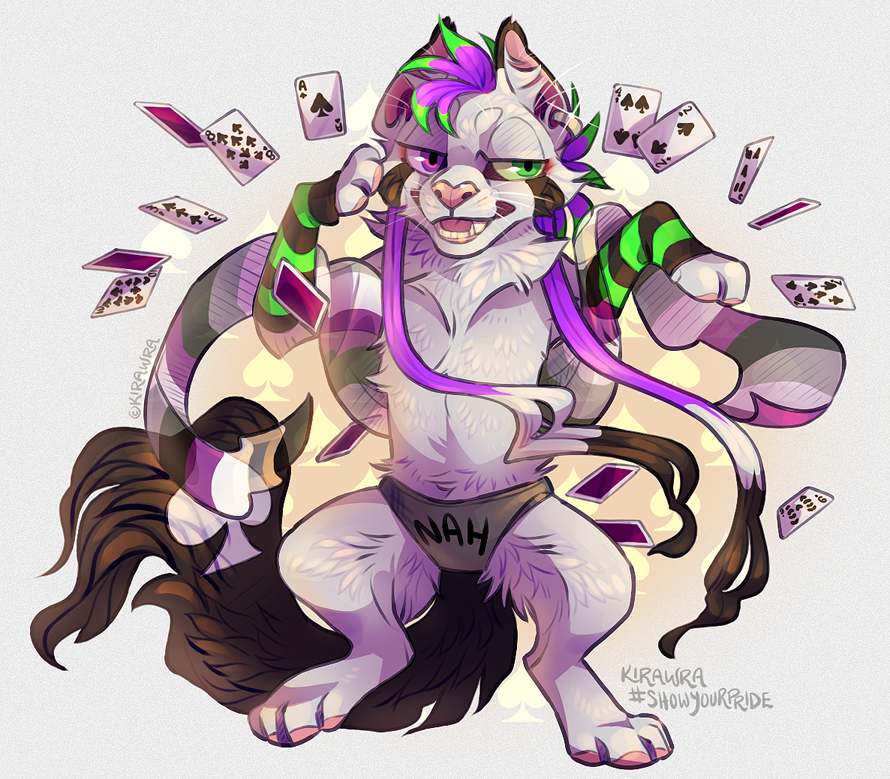 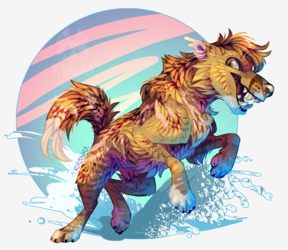 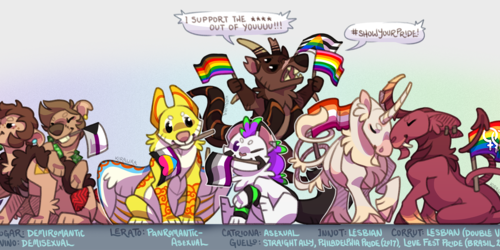 I really didn't plan on making a Pride drawing this year. I made one [last year] as a way to be subtly public about my sexuality, and making another this year just seemed like it would be redundant. And then FurAffinity partnered with Fursona Pins to hold a contest and hell, if they're gonna offer prize money, what's the harm in entering? XD

I've seen a rise in anti-asexual sentiment. It's funny, because for most of my life I never thought I was part of LGBT+. I always supported my LGBT+ friends, but it was never something I personally identified with or related to. I guess you could call that being in the closet, but it was less about denial or hiding and more about just not even knowing asexuality existed. I think that might be part of the problem - I am an actual asexual person and I never knew it existed until I was in my 20's. Even after learning about it, it still took me a long time to understand it and understand myself. So, I suppose I can see how people would be led to believe that asexuals aren't part of LGBT+. It is difficult to understand, and it seems "hidden" for the most part. I never thought it was worth talking about, because it doesn't seem like there's anything TO talk about.
But I have since learned that talking about it is extremely important. Like so many others in LGBT+, I grew up feeling alone, confused, broken, and excluded.

One of my earliest memories of confusion was around the age of 10. I remember trying to explain to my dad that I didn't understand what attraction was - the kind of thing I saw in movies and tv. The specific words I used were "I don't know what the difference is between an ugly person and a pretty person". My dad's response was more or less him not believing me mixed with learning when I'm older.
In grade school leading into middle school, I hit more snags. My classmates took part in general girl talk, gossiping about what boy was cuter and specifically about attractive parts of the body like faces and shoulders and butts. As hilarious as it is, this stuck with me for a long time. I could never understand what was attractive about a butt. Try as I might to understand what they meant by "cute butt" I just plain didn't get it, and it made trying to join in with that kind of conversation foreign and awkward. Certainly I had experienced crushes before, but it was always with close friends. I wasn't able to just look at a person and judge whether their body was appealing or not.

High school is when things really became obvious that I just wasn't like other people. My parents said I was "shy", my friends called me "innocent", and I thought of myself as a "late bloomer" or even "stunted" at times. All of these titles to try and make peace with the fact that I had never kissed anyone, had never dated anyone, had never thought of another person as being hot or sexy, and certainly didn't feel any desire for that kind of intimacy. I always had lots of friends, and crushes came and went, but the thought of sex utterly horrified me. Was that really something people did? Was it really something people wanted to do? Why were there always these concerns of pregnancy or cheating, couldn't people just not have sex instead?

In senior year (12th grade) at 17 years old, I finally got my first boyfriend. My friends were laughably overprotective, because it was a running joke that I would never date until I was 50. But he was a long-time friend, and had also never dated before, so we were comfortable stumbling through the idea of a relationship and figuring it out as we went along. My parents were overly cautious - telling me he wasn't allowed on my bed and that I had to keep my bedroom door open at all times. I remember one time we were laying in bed watching a movie on my laptop, and my step-dad walked in and yelled at me for it. I'm sure they just didn't know what to expect, but it all seemed so ridiculous and theatrical. I had absolutely no desire to do whatever they were trying to prevent from happening, and it was frustrating to be policed as if I couldn't be trusted.

One night my boyfriend and I were talking, months into our relationship, and he mentioned that he did indeed find me attractive and would like to eventually have sex. This seems like a pretty obvious and natural escalation of events for someone in a relationship, but it honestly scared me to think about. I told my friend the next day what he had said, and their response was "Duh. Of course he wants to have sex with you. He's your boyfriend". It sounded so casual and expected. I honestly felt kind of stupid. Why did this bother me so much? No one was forcing me to do anything, but just the thought of maybe one day having sex with another person who I knew very well was still such a strange, scary, almost unreal idea. WHEN was I going to start being a normal f*ing person? WHEN was I going to stop being so stunted and reserved? WHEN was I going to actually start desiring intimacy like everyone else did? WHEN was I going to want to actually kiss or touch or be attracted to a person's body? Why did I have to be so disconnected and broken? Why couldn't I feel the urges that came naturally to everyone else? Sex is scary for anyone the first time, but God, at least other people actually wanted it. It was a terrible tug-of-war inside myself. I couldn't fathom how this was something other people actually desired, and at the same time, couldn't understand why I didn't desire it. Every piece of media, every movie, tv show, magazine and song, told me my whole life that sex is a natural progression of relationships. Told me that it's a natural thing everyone does. So if I didn't want it.. that clearly meant something was wrong with me, right? If I didn't find my boyfriend attractive, if I didn't want to kiss him, didn't want to touch his body, didn't want sex with him.. did that mean I didn't love him?

I first saw the word "Asexual" (being applied to a person) on tumblr in 2012 at 22 years of age. I remembered reading about the asexual-reproduction of corals in High School. Humans don't reproduce asexually, so that just seemed silly. But I looked into it, and I learned about it, and it really intrigued me. There was a single definition that I saw over and over and over again: "People who identify as Asexual do not feel sexual attraction". The more I read it, the less sense it made. I found myself asking, "But what is sexual attraction? How do you know if you feel it if you don't know what it is?". I remember getting increasingly frustrated just trying to understand this simple definition. In a hilarious moment of self-awareness, I eventually realized that not knowing what sexual attraction was probably meant that I didn't feel it, which probably meant that I was asexual. Genius.

For the first time in my life, there was suddenly a word for it. There was a definition, a reason behind my years of confusion and struggle and inability to relate. Suddenly I wasn't shy, reserved, stunted, or broken. I was just Asexual. And most importantly, suddenly I wasn't alone.

This is the reason we should talk about our Asexuality. This is the reason we should support it within the LGBT+ community. I wonder how many younger me's there are out there, who don't know themselves. I wonder how different my life may have been if I knew about asexuality sooner, if I knew that I've been whole and normal the whole time. I wonder what it might have been like if other people were educated and aware of asexuality, and could have helped me understand it, could have helped me learn that love is not dependent on sex, that there are other people, and that being this way is okay.

So this year, Catriona is flaunting her Pride a little bit more unabashedly.