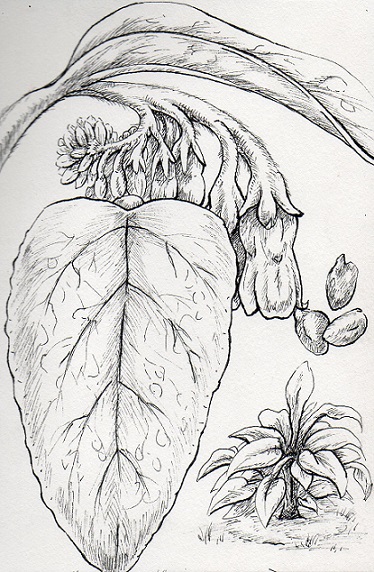 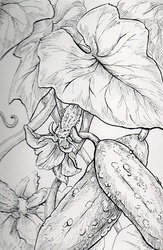 Today's Nature post features Comfrey. Comfrey, Symphytum Officinale L, is a perennial herb that belongs to the plant family Boraginaceae which include plants such as the heliotrope. Comfrey is also known as healing-herb or knitbone and it's scientific name comes from the word Symphtum which means 'to heal'. The Comfrey possesses large, fuzzy leaves and faintly curling, bell-shaped flowers in a range of pink, white, and purple colors. It grows swiftly, often being cut for harvesting when it reaches approximately 24 inches tall. Comfrey plants are native to multiple areas of Europe and Asia in lands such as Turkey, Siberia, Ireland, Britain, and Kazakhstan. It prefers growing in damp, grassy places and can commonly be found along ditches or river banks. The most commonly used Comfrey plant is a hybrid called the Russian Comfrey which possesses the highest levels of alkaloids alongside the Prickly Comfrey. For thousands of years, the Comfrey plant has been used as a medicinal herb. However, the pyrrolizidine alkaloids present in the plant are poisonous chemicals. The amount of this present depends highly on the age of the plant and the time of harvest. The roots contain ten times more of these alkaloids than the plants. It is very important to do proper research about these plants on uses and preparation before using. Comfrey also possesses high levels of allantoin, a cell-proliferant, which means that it aids in the growth of healthy cells over scar tissue. This makes it a good choice for aiding in the growth of connective tissues and cartilage. This also means Comfrey aids in healing broken bones, bruises, torn ligaments, or even twisting an ankle. It's nickname knitbone comes from this ability when used as a poultice or added to the diet to speed healing. Other uses when applied to the skin include treating joint inflammation, arthritis, swollen veins, and gout. Salves of comfrey work on milder problems such as diaper rash, acne, burns, skinned knees, or other shallow or raw injuries like cat scratches. Comfrey also contains iron, protein, plant calcium, and Vitamins B and A. The steroidal saponins found within Comfrey are known to aid in hormonal imbalances when added to tea. As a tea, Comfrey also aids in treating upset stomachs, persistent coughs, bronchitis, cancer, chest pain, diarrhea, heavy menstruation cycles, and ulcers. Gargling the liquid can even treat gum disease and sore throats. Cultivated since 400 BCE, Comfrey has been used by Greek physicians such as Nicander, Galen, and Herodotus. They used it for the previously mentioned teas, poultices, and women even used it in baths for cleansing and restoring feminine parts. The root of the plant was often used in spells for money while wearing or carrying the plant ensured safety during traveling. Putting a Comfrey leaf in one's luggage is said to keep luggage from being stolen or lost. Wrapping money in a comfrey leaf several days before gambling is said to keep your bets lucky. Comfrey is associated with feminine energies with connections to the element of water.