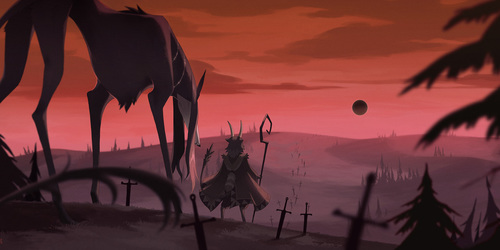 I took a moment to draw for myself, though I can't say I succeeded, but at least it was worth a shot.

Just Verys, aka. moth knight. Nothing canon, because Trata wouldn't harm him, namely laying her soulless offspring into him to burst out of his body. It's just dumbly symbolic in a way, because Verys grew up lacking something like a proper family (blah blah blah Abel doesn't like him blah Neil is a jerk blah Edwin runs away blah blah) and among all things he finds family in Trata, even though she's abominable when not wearing mortal's skin. Again, she's a monster, she could just use him as a nest for her babies or something. He's kinda dumb and loyal like a dog. Dog. Get it. Mordred calls him dog already. SMART.
...I really don't know. I wasn't really thinking while I drew this, because it makes only sense to me in the first place. B|

Verys is mine, Trata/Henry's (IT'S A GIRL just nobody is supposed to know ok) hands and babbies are May's