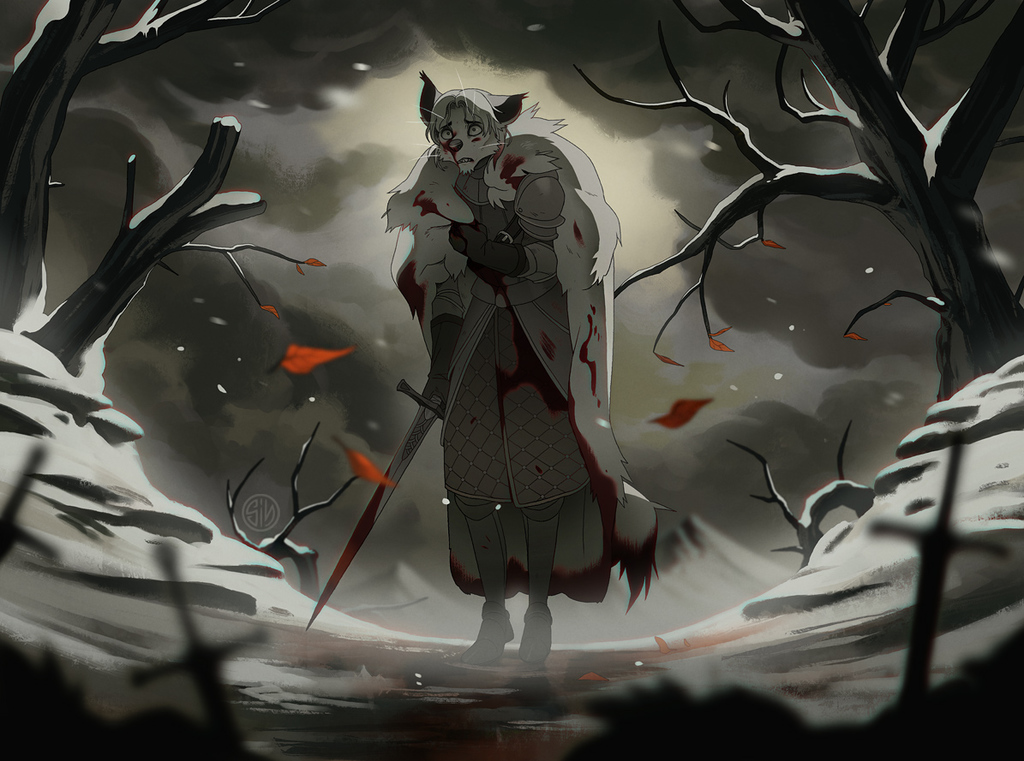 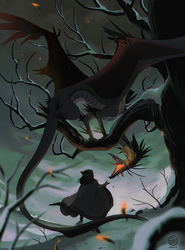 Some legends would argue what was easier to kill – a beast of fire or ice? Both took an army and men insane enough to know they wouldn’t return alive. Purging wasn’t a duty, but a necessity to keep people and their Lord houses safe. Slaying was a mission that took several weeks, chasing the beast all the way across the vast Northern landscapes in hopes they would eventually exhaust, and blades, griffins and men alike would take care of the rest.
Every dragon dead meant another epic tale of blood, snow and cinder, but the ghastliest, oldest fire dragon was no tale of honourable heroes. It was a tale of seared men and snow stained in crimson from those unfortunate enough to die to its claws.
Grimmyr was an elder dragon so big, a single bite could swallow a man whole. His wings were glowing like burning embers and his scales as dark as obsidian that would stand out against the cold winter sky. Redmond still shuddered to think of the beast’s maw and its blood soaking his clothes after he had the honour to finish it off on the back of his griffin. The vast majority of men from all across Eskara had died on the battlefield, a fight that was now sung of and re-enacted as an epic in plays. Those surviving were damaged in spirit and body, and the King, Redmond himself had lost his queen to the monster in battle.
Blades were put up like gravestones next to their owners’ bodies and Redmond, clad in white pelt, dragged himself up the slope of the mountain to find out about the queen’s fate. His surviving daughter was presented to him by a surviving Eskaran Lord who’s half has met the dragon’s fire who was barely able to keep on his own legs. Redmond collapsed in front of her, embracing his unscathed child.
Not every beast dead ended on a high note, Redmond would still flinch or wiggle himself out of the court when his men would have a play on the slaying of Grimmyr in honor.

(And Lord Harrow yells a lot about winning many battles and aiding the King, half-faced while wielding banners of beheaded dogs. Happy end.)

Small story time over. I suck at doing coherent writing, sorry. My grammar is weird and May is not here to yell corrections at me (CRY). Jokes aside. Uh.. Not much to say here. I can’t wait to get my new computer. I’m drawing on canvases that are way past print size and I keep having to “patch together” each document by drawing parts separately. I found out my ultimate drawing comfort starts at 6k pixels, ahem. And I’m just dealing with lots of lag because the only thing I like to work with is my trusty (dated) Photoshop. Luckily, I ordered a custom build a few days ago and… Yeah, from there drawing will be a lag-free breeze (also, vidya gaems I guess). Also, I keep trying to simplify characters and put more attention to backgrounds. Well, so far it’s working. I guess. I’ll just draw more and find my way back into drawing more involved things. 0_0