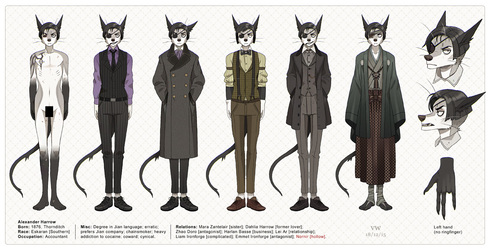 Reference of Lei for May c:

(copypasted)
Like most Hanxuli, she is small. They're Naoli pygmies and live in the denser jungles of the deep South. Lei was a shrine maiden, but a common unfortunate fate among Naoli - although Hanxuli are very rarely subject to it - is slavery. She took the rather unbelievable route all the way North to Eskara, although not deliberately. She spent a lot of time shipping around with Lanx and their Lagi captain - Gora. The only Eskaran man of their crew sold her to Ironforge, where she was a labrat for the longest of time. She escaped further South, to Hershey, and eventually met Alexander in a hospital, where she worked at.
Alexander was rather unglamorously enamoured with her... Now, that may sound silly, but they are actually a very happy pair. The only problem is that Alexander is prone to being an idiot. It can only be put this way. Idiocy.