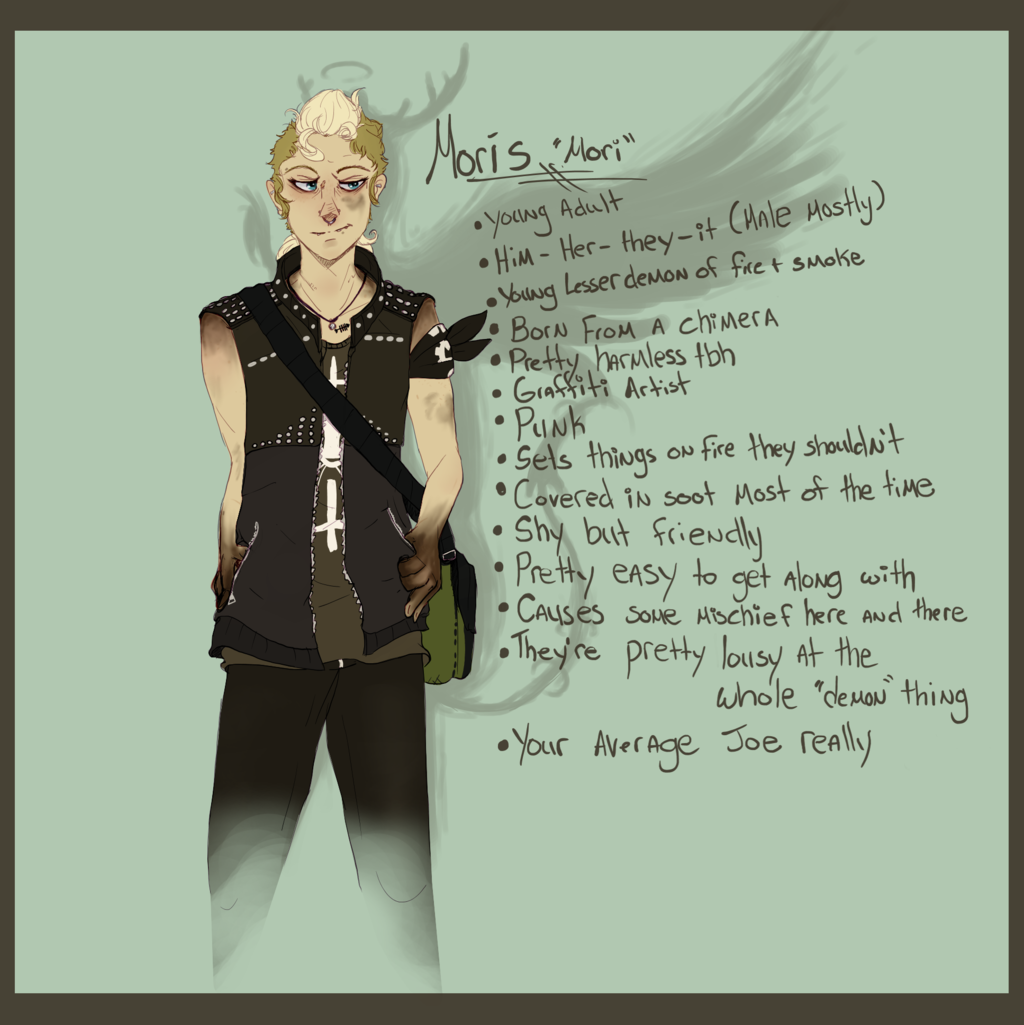 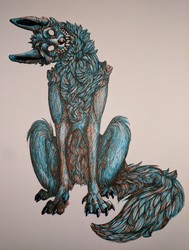 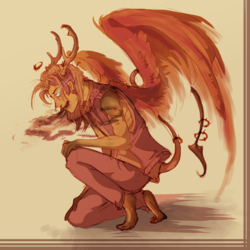 This is my Persona in all his punk ass glory

Name: Moris
NickName: Mori (often goes by this)
Age: Unkown. Looks to be in 20s

Other tid bits about him.
Random things:
-Lesser demon of fire, soot, and smoke
-Born from a chimera
-[when seen in his 'demon form'] he takes on the attributes of different animals like the stag, serpent, and vulture.
-Skin is almost always covered in soot. It does wash off, but it accumulates again by the end of the day.
-For those who have played Second Son, Mori's fire/smoke manipulation act similar to Delsin's powers at the beginning of the game, including the fast travel using smoke (that was that game right? Or am I thinking of something different?)
-Because he's such a "lesser" among the demon ranks, he's not immortal and can die. However he heals fast, so injuries have to be pretty traumatic to kill him. He also does age, but slowly, so like 5 or so years would be roughly equal to 1 normal year.
-Unlike other demons who are cold to the touch, he's rather warm. (Like warmer than a normal person), especially his hands.
-Graffiti artist.
-Doesn't really care much for his duties as a demon and disregards his tasks. However will do small destructive things to meet his quota, otherwise he'll be banished from the 'living' world and sent back to 'hell' where he has much less freedoms.
-Accidentally sets things on fire quite often. When his emotions fluctuate (ie Anger, excitement, ect.) his hands get hotter and well can scorch or start things on fire.
-Though, that doesn't mean his pyro butt doesn't burn things to the ground just for the fun of it.
-Shy, but friendly.
-Can sense bad luck/natural disasters/ect before they happen. Often uses this to warn people rather then adding into the chaos.
-Typical highschool punk mentality.
-Goofball
-Friends often forget he's a supernatural being because of how chill he is and doesn't really do anything 'bad' when they're around.
-Kind hearted person really, he's just sort of forced to hurt people/wreak havoc by higher demons.
-Is a bottomless pit and garbage can. He'll eat pretty much anything you give him.

-If you want to know more about him! Just ask!