It Was Nice Living with You ; Goodbye my Only Friend by Karuno 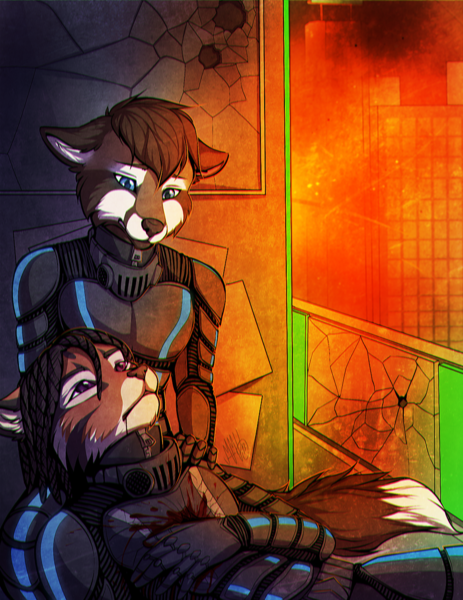 It Was Nice Living with You ; Goodbye my Only Friend

I woke up. That is all I remember, and all that mattered at that given moment. The lights of my exo-glove were giving dim illumination to otherwise dark apartment while small beams of light slowly crawled through the barricaded windows, cast by the hellish inferno raging outside. When first saw the flames that were coiling around skyscrapers and engulfing them like constricting serpents, I had felt uneasy and restless. Something inside me had been telling me that this was a place with no serenity, a place that might claim my life without hesitation. It was a heavy thought to bear, but after several days of non-stop action and firefights, my heart had shut itself within the deepest confines of my mind, hiding itself from the blazing insanity of outside world and retreating to the soothing darkness of the inside.

I clambered up, pulling the respirator mask back on. The portable air conditioning unit each squad was issued with was still working in the corner of the room, but for how long the charge of its batteries would last, there was no telling. It made the inside areas bearable, but the second one took a step outside, it was hell. Ash and gas fumes everywhere, preying upon the fool hardy and choking the life out of them like vengeful ghosts of the fallen, punishing the living for the mistakes they had made. As I picked up my rifle from the floor, I noticed Samuel’s shadow moving across the boarded windows. He was still keeping a watch apparently. I instantly felt bad for falling asleep, but then again I couldn’t really help it at that point. We had been fighting for days without any kind of chance to rest. In a sense, this apartment had been a blessing, abandoned by the previous inhabitants who had fled from the terrors of war with their possessions and families long time before the engagement had started. They were the lucky ones. Duty was duty, and had to be done, but somewhere deep within me, I felt cheated. Lance had just turned 4 when the call came, and I had to obey. I can still remember his eyes, filled childish innocence and sadness, when the officials came to get me. He didn’t maybe understand much, but somehow, he knew that the place daddy was going to was not a happy one at all. The thought brought tears to my eyes back then, and it still does even now.

I opened the door to the balcony. The wind, heated up by the burning buildings and gases in the air, slammed against my face instantly. There were small trickles of ash everywhere, floating like some sort of macabre fairies. “Finally awake, Neil?” I heard Samuel ask, his voice muffled and a bit distorted by the respirator he was wearing. I turned towards him while crouching down and huddling against the wall behind me, moving closer to the corner between the glass safety railing and it in which the dreadlocked tiger had parked himself. “Yea… Sorry about that, Sam…” Even though I couldn’t see his face entirely, I know he was smiling at that time. “No sweat really. You know how this place gets to you and me sometimes. A professional always knows not to over exert.” He leaned forward and placed his hand onto my shoulder, and I knew he really meant what he said. We had been friends ever since our early school years. There was a bond between the two of us, stronger than any other bond I had ever made with anyone else.

We sat there for a moment in complete silence. Neither of us talked. It was one of those kinds of moments where everything stood still. The sounds of battle being fought below us were distant and muffled, and blazing fires dimmed, as if extinguished by the Spirit itself to grant them this moment of solace and peace. As usual, Samuel was the first one to talk. He had always been the more active one out of the two of us when it came to starting up conversations. In fact, I can pretty much say that the main reason I was able to emerge from that conflict with sane mind, was because of my conversations with him. He seemed to understand whenever I felt like talking to someone and took the initiative. “I wonder what Amber is doing…” He talked about Amber a lot, and I clearly understood why. We both loved our children greatly, and the memories about them were the things that kept us fighting on, no matter how hopeless the situation was or would become. “Probably playing with Lance… They are like shirt and pants; neither goes anywhere without the other.” I could hear Samuel laugh a bit. “Indeed… just like the two of us…” The thought put a smile onto my face as well. “We’ll see about that when they both start school… Remember the first time we met?” I asked, shifting my position into a more comfortable one. “How could I forget? You had forgotten your books home, I had to share mine with you. I also have a vague memory of making protest against it under the premise that you were way too girly.” We both laughed from the bottom of our hearts. There we were, in a warzone hotspot, chatting and laughing like we were having coffee at a café before picking our kids up from daycare. “We have come a long way together, haven’t we N-“ I remember a crash, and then the world stood still.

For a moment, nothing seemed to make sense to me. Then the world and reality rushed back into my mind, tearing my heart from the darkness holding it up into the light. Samuel was on the floor with a hole size of my fist through his chest right in the center. I rushed to his aid. “Sam! Sam! Are you alright, Samuel?!” His breathing was unnatural, every single exhale wheezing powerlessly. I dragged him into the door way, carefully keeping my head down. I was shaking uncontrollably, and tears were about to make their way back into my eyes. I didn’t even close the door. “I-It burns…” Samuel wheezed, and I could see that the edges of hole in his exo-glove were still smoldering, red stains beginning to appear as the uncauterized wounds within him started to spew blood out. He was crying, and mumbling something I couldn’t hear because of the respirator mask. I tried to think calmly, and slip back into the drill routines, but it didn’t help at all. My mind was in state of chaos. “Sam! Hang on! I’ll get the medi-kit!” I shouted in panic, about to rush to get it, but he stopped me. His hand clenched around my wrist, as he mustered his last strength to take off the respirator. “N-N-Neil… too late…” he gasped. I removed my respirator as well, even though I am not sure why. Back then my mind was too much of a mess to think straight anyway. “What do you mean too late?! Let go! I can still make it!” He smiled. “T-Take… Amber and La… when it’s warm… they’ll love it…” He was not able to form complete sentences anymore, and I quickly realized that his life was rapidly leaving him. At this point, I perfectly knew what would happen. Somehow, the graveness of the situation calmed me down, and I think it was because of the friendship we shared. My friend was about to sleep away, and the least I could do was to listen to his parting words.

He coughed up some blood. “We used to… too… remember, Ne…” He started to shake a bit, and I helped him into a slightly better position. I felt empty. I felt cheated. Tears were streaming down from my eyes. “Yea, I remember… Those were the times…” Samuel smiled up at me weakly. “Winter… came…” His eyes started to trail, and breathing became even more unstable. “Goo… -e… A… -er… -ve you…”

A piece of music I wrote with the scene of two friends, on dying after a fatal wound, on mind.

I asked Maya-Neko (@ Maya-Neko on Furaffinity.) if she could draw a piece of art to reinforce the music behind.

I then though about a three-fur collab, which ended up to be with Oscar (@ AllowedCamping on Furaffinity), a friend of Maya-Neko she added to the party !

I think what he wrote fits kinda nicely the picture, don't you think? :-)

Since I've finished that piece, it has been a month ; a month I used to improve the mix and practice piano.

Brace yourselves, for my January piece is comin