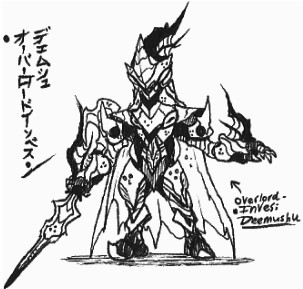 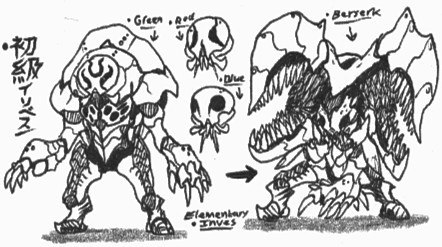 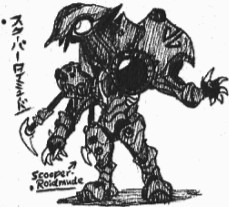 Dēmushu is an Overlord Inves in crimson (真紅) armor who enjoys fighting and is prone to anger. He is armed with a staff-like blade, using his sword form for melee combat, and has the ability to summon Helheim plant vines which used to entrap enemies as a staff. He is also capable of firing shockwave projectiles from his hand, and his greatest ability is to dissolve into a gelatinous mass capable of deflecting attacks easily, while retaining formidable offensive power. Dēmushu is the first of the Overlords to be sighted in Helheim Forest, encountering Kaito when he is sent to find him by Ryoma. Dēmushu attempts to converse with Kaito by consulting a dictionary, but he ultimately fights him when he is frustrated over the inability to communicate and overpowers Baron Mango Arms. By the time he fights Baron after he gets the Genesis Driver, Dēmushu masters a bit of Japanese to curse at his opponent before he is ordered to fall back.