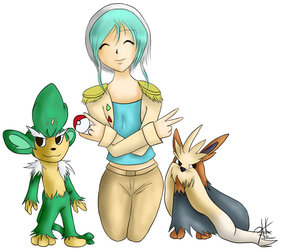 Old commission for a friend's character. Celeste belongs to her. Originally posted on February 19, 2011.

Name: Celeste Micheals
Age: 19
History: Her father is a potent head figure in society, she never knew her mother, as she died in child birth. Celeste has always tried to be as strong as her father wanted her to be, and so, she made a deal with a fae creature for the power she wanted. It cost her a portion of her sanity, and caused her father to hate her. That happened three years ago. She is now 19, a very powerful mage, with some abilities from the Fairy being that she made the deal with. She made a pact with a Banshee and gave up her soul for the power she wanted.
Personality: Celeste is fascinated by fog, mist, or any storm, she is rather distant, but very easy going. Though, she has a tendency to react harshly for no real reason or cause. She is very intelligent and quite friendly, if you can get used to her absent mindedness and mood swings.