Hare Force's day off by Kadmiel 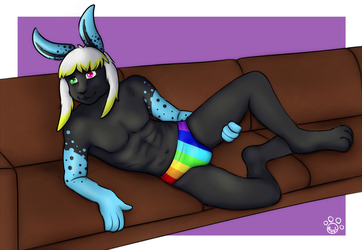 Jack's alternate identity is Hare Force as having many powers can make it appear there is more than one enemy.
Known powers include

Main ability-Requisition-Passive skill, triggered by being near a super with an ability

Fixed Point-Passive skill, always active, triggered by any level of injury, reverses the injury given time based on the extent of it.

Divide and conquer-Trigger skill-He is able to make up to four avatars of himself, rapid regeneration carries over without degradation. This small squad is what he derived his name from.

More to be listed as he comes into contact of other supers of transferable ability.
Jackson belongs to me

DUGG is a real Australian based company so DUGG is copyright to them, all else is fiction. May use DUGG as the company that employs him.

Disclaimer to avoid potential drama
Sorry guys, Jack is as straight as a wooden ruler.
Although, i have nothing against a homosexual couple or individual, regardless of being mormon or not, I just can't find reason to have beef.