[The Last Commissions] A Breakfast Story by Justin1029

The gryphon woke up. Well, as much as that phrase means anything to a God dwelling on the astral plane. Sleep was more a stat of mind that a physical thing, but the Gryphon God, Justin, was more aware of the worlds around him now, looking 'bleary' eyed out his window, and even manifesting a pillow to throw at it, which hit with a satisfying thump.

"Keep it down out there!" he shouted, and get the equivalent of a middle finger in return from whoever was outside, some gods making a new universe. Why couldn't they do that in their own time, and in another part of the Astral? Annoyed, he climbed out of his bed, and stretched, his blue-white wings going out so far they could have blotted out the sun over a continent.

The kinks worked out, the gryphon ran his tongue over his beak and teeth, sigh in annoyance at them, wondering if the other gods had to put up with this sort of thing, as he opened his jaws wide, revealing several structures had been built in his mouth during his slumber, with peoples literally moving between his fangs, digging into them for some promised ore or something.

Moochers, Demi-Gods, and worst of all, uppity mortals. He knew just how to deal with them, and with a smirk, he breathed out, turning his morning breath into the foulest stuff he could think of; the caustic gas literally melting away those foolish enough to try and 'mine' his body for resources while he happened to be otherwise occupied.

That done, the God proceeded into a bathroom a morning ritual. He could have used the same morning breath to clean his teeth, honestly, but it was a habit, like sleeping, he'd kept. It didn't keep him humble, as he was hardly that, but it was still one of those things he did, and he liked, and there wasn't really anyone to say otherwise.

A brush covered in mint flavoured paste appeared in his hand, as he stood before a mirror that shone with a million lights, making him blink a little as he waved his hand, toning down the literal God Rays for a bit, as he brushed his teeth, getting a few bits of temples and ships from between them, and then spitting them out into the sink, where they'd be cast into the void.

That done, and with a bit of cracking his neck to work a kink out of it, the griffon then proceeded into his home deeper, passing a few displays of his favourite worlds, held suspended in little cases, protected from his whim, just in case. He trusted himself not to break one on purpose, but on accident, even a god was capable of being off every once in a while.

Arriving in his kitchen, he sighed, wondering just what he should make, as his power filtered out, and manifested a few things. Most of them not really appropriate for breakfast, though he had to admit, a steak sounded good, but no, that was too heavy for the first meal of the day, and he quickly banished it as he walked up to the counter.

Cereal didn't have enough pizzazz to suit his mood, and the powdered energy drinks would have him whizzing for eons at a time later, not the sort of dignified position a god should be in. Fun sometimes, but he just didn't feel it today. Finally, he remembered some stuff a red wolf 'Pseudo God' he'd met a few epoch back had given him.

"Yeah, I suppose I can treat myself," he said, and snapped his fingers. Moving them like the conductor of a band, he manifested a bowl with some goop like substance in it, and a pan above the stove, one that sparked a little, as he turned on the heat beneath it, and proceeded to pour the batter into the pan until it was a perfect circle.

It was with a smirk that he walked up to the pan, and watched as the batter began to harden, congealing until it had turned a nice, fluffy brown colour on one side, the perfect pancake, which he then flipped with a wave of his hand, not willing to risk touching it physically, instead working it over with his power, and casting it to a plate.

"Looking good," he commented to no one in particular, as he set more batter into the pan, making another perfect circle. Then another. By the end of that third one, as much as he felt hungry enough for five, he was spent. And besides, it wasn't good to stuff oneself too soon after waking up, so he banished all the implements, and then walked to the dining room.

Another snap of his fingers, and the table was...basically appointed. He could have manifested something spectacular or godly, but the sight before him wouldn't have looked out of place in a college student's apartment. Smirking at a memory that brought up, Justin settled himself into his chair, and then tapped the table, manifesting a fork, a knife, and a small cup of butter.

The butter was the most interesting part, of course, as it sparkled with purple flecks, purple flecks that sang with Astral Power. Smiling to himself, Justin ran his knife through the goop, and then watched with delight as he spread it atop the pancake, and it 'melted' not into runny liquid, but instead into the surface of a world.

It had everything a world should have. Continents divided by oceans, and currents running through them. Clouds and such even came with it, creating a nice effect as he smiled down at it, enjoying the way he felt the emotions of those below, for some, the night suddenly giving way to the bright light that was his dining room's overhead lamp, for others, a sudden shift in position.

It took them a long time to settle on a standard emotion for what they were seeing, as a wall of silver passed through the heavens, and when it was done sweeping away all the sky, they found themselves staring up at the visage of a true apex predator, one who licked the edges of his beak, and smiled down at them with hungry eyes.

He wasn't going to miss this, and even as he brought his knife and fork up, the glimmering silver of their construction looking like they were made of value beyond measure, he swirled his finger, and suddenly, below him, beneath all his senses, a body wrote itself into the world; a body, a history, and a soul that was part of his own.

He was now there when the world was transported, smiling as he watched the starry night get swept away for the dull glow of the overhead. He was smiling too, into his own famished face, as those teeth glinted, their mass larger than any mountain, and finally as the knife and fork rose into view, and then dove into the horizons.

The Justin on the world felt the world shake, and heard the truly indescribable sounds as the knife literally carved through the landscape. It cut down through rock and earth, mountains cracking, volcanoes exploding, as the utensil finally dug deep enough to hit the fluffy pancake deep beneath it all, so far down that no one would have dug to that spot.

Justin was still smiling as he watched the people, fearful and pathetic, rushing about. As if they might find safety somewhere, anywhere to hide from the end of their world. He shook his head at the folly of mortals, as the fork appeared above him, the tines wicked sharp in the sky, before the fell, and pierced the ground like the trident of an angry god.

But no, this god was hungry, and so the section of the continent he was on was lifted up, Justin unable to feel it beyond a low rumble, as the sky overhead slowly twisted, warped, and spun, until he was facing his own maw, the tongue lolling out before it, like the gates to all the hells made real, as hot, humid breath washed over this chunk of a doomed world, and he was tossed inside.

Watching his own fangs crunch and tear through the world was interesting. Lava flows broke on his teeth, seas raged along his tongue, and the simple act of breathing made hurricanes that picked up and scattered whole cities without effort, as the godly griffon enjoyed his meal, and the mortal below was made part of it.

When he was swallowed, when the tongue danced beneath him, the mortal Justin felt its motion, and was tossed down into his throat, the great passage guiding him into the belly of the beast, so far down that it was impossible to measure, but the air, burning not with acids but with raw power, stripped him of flesh and soul as he entered, the physical body splashing into the lake at the bottom, alongside countless others.

The Justin above, seeing both at once, mmmed at his meal, hoping he ran into that wolf again some day, as the way this stuff made it taste was fantastic, and he moved to savour another bite, looking to the other two pancakes on his plate, and smiling, even as he opened his jaws again, and took in more of the world below to enjoy. 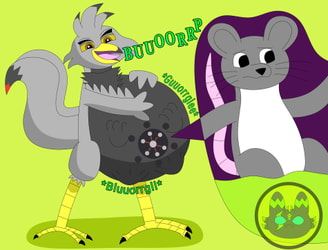 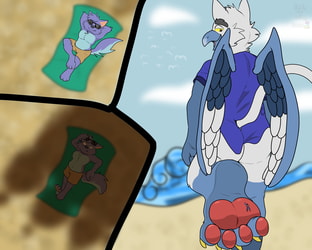 [The Last Commissions] A Breakfast Story

The godly gryphon is enjoying a bit of breakfast, with some special toppings provided by one of Sage's characters...yes, his characters can hang out with god level beings on a whim. Hell, one of them is basically a god. That said, pancakes...and vore, and macro/micro theming abound. The god seemed to enjoy it, and hope you have fun too.