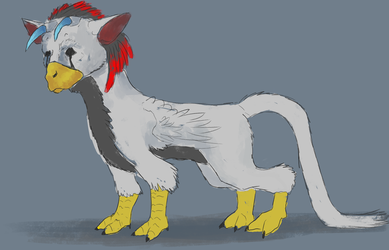 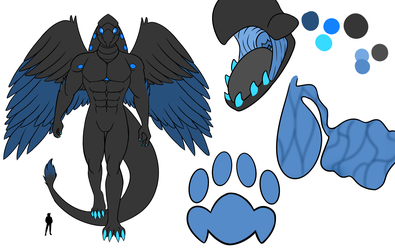 Polaris is a "stellar dragon" who is anthro, and is quite special, in many ways. He's also digitgrade.
His height starts at 7'3". His macro height is around 100 metres, but it could be bigger...
The dragon is designed in black, grey, red, and yellow colours, with a coral & striped pattern across his body. He has blue eyes that are surrounded by a red eye shadow and yellow dome circle (half circle), his horns are black, and his black hair has yellow highlights. His finger and toe claws are white. His black tongue has one tongue stud located near the tip of the tongue. He's also got a black cock. He has white soles on his feet, and white palms on his hands. (The reason why he has a similar personality and similar looks to Sirius is because Polaris inherited many of Sirius's traits, and probably because he fits the style well.)

The dragon likes to toy with micros: sometimes gentle, but mostly for his own pleasure. Maybe as his sex toys, snacks, or insoles. He's normally big, and can also sizeshift, and also has a special breath for hypnotization, which is yellow. He can also duplicate himself and can control up to 6 clones of himself at any given time. He's also a dom, and is pretty much a pretty good pred.

He enjoys going around nude, but his typical outfit is a pair of grey shorts. He likes wearing a black thong, or a jock strap with "Human Disposal" branding on the rim. He likes to show off his yellow markings so rarely wears a top. He also has a collar with a silver ring at the front. He also has a finger ring (left hand, pinky finger), a bracelet (right wrist) and a toe ring (right foot, ring toe).

So yeah, this is the SFW version of the reference sheet that I uploaded before. Enjoy!