The Predator Plant by Justin1029 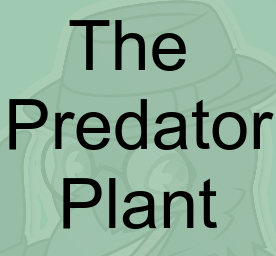 The venus flytrap was hungry, and it had no interest in eating insects.

It had begun to grow only a few days ago. Minikay, a green bird gardener, had been walking through the woods when he found the strange plant: a tiny, blue, egg-like pod, with purple stripes all around it, and the beginnings of a stem just peeking out.

He just /had/ to study it! So, the plant enthusiast took a pot and shovel from his bag (of course he had those in there), and took the plant home. He put it separate from his flowers, in case the roots would end up crossing over, and watered it every day.

It didn’t take long for the plant to start growing. After watering it for only a few days, the stem sprouted out of the pot, and revealed a flytrap-shaped mouth, whose fangs cut Minikay’s fingers when he touched them. The blue striped pod was bent back as the stem began to extend, showcasing the flytrap in all of it’s glory, like a stage for the strange creature.

The more Minikay watered the plant, the more it grew. Soon, it went from an inch, to a few inches, to half a foot, to a foot! Minikay watched in wonder as the creature got bigger and bigger, and every day, he was excited to go outside and see it’s progress. Eventually, he decided to give it a name—Minikay named all of his plants, you see. For this one, he decided to give it the name “Justin”. It seemed fitting, somehow.

Finally, it was done. Minikay stepped outside, and saw the plant more glorious than ever before. It was seven feet tall now. The bird took a few steps backward in the garden, and stared at the flytrap in all of it’s glory.

Justin was beautiful. The pod it had started life in had extended, then flattened on the ground, creating a base for the large creature. It’s stem was sturdy, strong, and blue, with six tentacle-like leaves, which had surprising strength for a plant. And finally, there was the plant’s glorious mouth: an enormous bud with sharp green “teeth” sticking out of the purple “lips”, all framed by a slouched blue head covered in warts and bumps. Minikay assumed they were some kind of adaptation that helped the plant survive in the wild.

It looked full-grown now. At least, that’s what Minikay’s gardening instincts were telling him. The green bird was proud that he’d brought Justin this far, and he let out a happy sigh. Then he turned to his other flowers, and began watering them.

That’s when Justin opened his eyes.

Two of the bumps on his head slid back, and revealed two green pupils. He used them to stare at the gardener as he watered the other plants, oblivious to the new development in the flytrap. Justin had wanted, at first, to resist when the gardener had removed him from the woods—but he wasn’t strong enough, or big enough. But that turned out to be a good thing, because the more he felt the gardener’s presence—watering him, talking to him, caring for him—the hungrier he got. And now that he was old enough, he was going to eat.

Minikay was finishing watering the flowers when he heard a rustling sound. He turned to Justin, and saw the plant moving it’s leaves—on it’s own! “Amazing!” the bird muttered, walking up to the flytrap. “What are you doing there, buddy? What do you need? Maybe--”

He was interrupted as the plant opened it’s strange eyes—that made Minikay yelp in surprise. While he was startled, Justin reached out with his leafy limbs and grabbed the bird, wrapping them tightly around the gardener.

“Justin, what are you doing?!” Minikay yelped, simultaneously terrified and awed. He looked up at the plant—and found himself staring right into it’s massive maw. It was glowing blue on the inside—the bird could swear he’d never seen that before!--and dripping with what looked like saliva. But a plant couldn’t have saliva! How was this--

The plant bit down on Minikay’s body—the green bird screamed and squeezed his eyes shut, preparing to have teeth cut his flesh. But nothing happened, and he opened his eyes. What he couldn’t see was that the sharp teeth were extended upward, and actively avoiding his body (Justin had a better fate in mind for the gardener). What he /could/ see was the glowing, drooly insides of the plant’s mouth, smelling dank and cave-like, with what could only be a tongue licking his face and chest.

The plant swallowed Minikay, and his face and shoulders were crammed into the tight, lit-up insides of the throat. The stem stretched outward to fit the massive morsel, and a large bulge formed on the outside of the plant. Minikay tried to scream, but his mouth was pressed against the glowing blue insides; he couldn’t say a word. He thrashed around, trying to kick himself out of the plant, but that only succeeded in getting him deeper inside—his chest and hips were now gripped by the throat, great! There was no escaping this.

And then, the final swallow: Justin let the scaley feet of his prey slip inside his mouth, and he gulped then down. Now all of Minikay was traveling down the tight throat, and the bird couldn’t even struggle now.

He emptied into a large, glowing chamber: he recognized the texture of the pod, but it wasn’t this big before! It must have grown underground—by watering the plant, Minikay had only enhanced the plant’s digestive system. And this stomach was just as tight as the throat, a cramped space where the bird was forced to curl up. He couldn’t even struggle, and the bird was forced to wait to what would come next.

Justin licked his lips. The gardener would provide a few days’ worth of sustenance—and give enough energy to grow his legs.

Who would he eat next?
Justin stewed on the remains of the delicious bird. Minikay’s body had taken days to digest, and every moment had been absolutely beautiful. Now, the bird was nothing but a pile of goo in his plant stomach.

And he planned to give that bird a glorious rebirth.

It took a while for Minikay to realize he wasn’t dead.

The green bird sat up, groaning. What happened? He remembered getting eaten by his strange plant—by Justin! But he was back in his house now. . . how was that possible?

Minikay jumped at the voice, and turned in surprise. It was Justin, his plant! But it wasn’t exactly Justin, the plant was . . . different.

He was standing on two feet, for one thing. He now had a body made out of blue vines, all intercoiled around each other for support. His fingers and toes were strands of these vines, fashioned to create a more humanoid shape. And on top of it all was that massive plant head: sharp teeth, purple lips, big head, large warts for eyes.

“Figured you could use an upgrade,” Justin said, smirking at Minikay. “That bird body you were in was pretty boring—so I thought you could use a better one. And it was a tasty treat for me, too~.”

He looked down at himself, and jumped up in total surprise. Justin was right; his body had changed. Now, he too was made of vines wrapped around each other, only his were green and feathery, in contrast to Justin’s firm blue ones. He felt his beak, and realized it was now made out of leaves—as was his bird feet, whose sharp claws had stayed intact, but whose surface (and probably interior) was leafy now.

Justin’s voice brought Minikay back to reality, and he looked nervously up at the plant. “You ate me!” the bird exclaimed. “And you turned me into . . . this?!”

“Sounds about right,” the blue plant said, licking his lips. “You were pretty tasty, if I do say so myself. But hey, I did it so you could get a sweet new body—one that’s practically immortal. Can’t say it’s not a great perk~!”

Minikay did have to agree that the “immortality” thing kinda sounded awesome, if not a bit terrifying. “So,” he asked, turning to Justin, “what now?”

“Now,” Justin purred, tracing a hand down Minikay’s chest, “I’d love to have some fun with you, if you’re up for it. It would give you a chance to try out that new body, too. What do you say?”

That /did/ sound fun—and rather enticing. “Sounds great,” the bird said. “Let’s go up to my room.”

Minikay led Justin up the stairs and into the bedroom. The leafy bird sat on the bed, and the plant did the same.

Justin reached up and put his foot on the bird’s knee. Minikay could feel every calloused inch of the vines, every prick of the leaves against his bare skin, and he liked it.

“I want to give you a niiiice little massage, cutie,” the plant purred. “Do you want that?”

Minikay quickly nodded, and Justin grinned. “Then let’s get started.”

The plant traced his toes on Minikay’s knee first, going in steady circles. The bird leaned back, letting out a content sigh at the sensation. Then the plant moved down, running his foot down Minikay’s leg, letting the bird feel the nails of his plant feet, and the surface of the “skin”: leafy vines that were soft to the touch, but also held callouses from its’ time on earth, all of it running down Minikay in a delightful motion.

The bird immediately obeyed the order—he was so eager to see what would come next. And Justin delivered.

Justin sat up on the bed, sitting near Minikay’s feet. Then the plant lifted up his foot—for a moment Minikay saw it descending in slow motion, watched the soft vines come down from the air—and placed it right in the center of Minikay’s chest.

The bird breathed in and out with his mouth, and felt the foot rise and fall as his belly rose and fell. The sensation was incredible, that callous, soft foot planted firmly on his chest, making him unable to escape, even if he wanted to. Not that he /did/ want to—Minikay was so wrapped up in seeing what would happen next, the thought never crossed his mind.

Justin rubbed his foot on Minikay’s chest: first in slow circles like before, letting the bird feel every part of the instrument that was planted on him. Then Justin expanded his reach, running the foot up Minikay’s chest, to the bird’s collarbone, and retreating back, down his chest, to his leg, and stopping at the tip of the bird's foot.

“More?” Justin asked with a smirk.

Justin obeyed, running his foot back up to Minikay’s chest, tracing it around the bird’s sensitive skin. “Turn on your back,” Justin ordered. The bird did so at once, flipping over so that his head was facing the pillow—now he could no longer see what Justin was doing. It was thrilling.

He felt the plant place his foot on the center of his back, putting the slightest bit of pressure there, showing who was in control of the situation. Then the foot traced again, going all around his back, grazing his ass as it went down to his legs. Minikay sighed happily as he felt it all.

All too soon, Justin stopped. Minikay flipped back over and sat up, smiling.

“That was fun,” the bird said, slightly embarrassed. 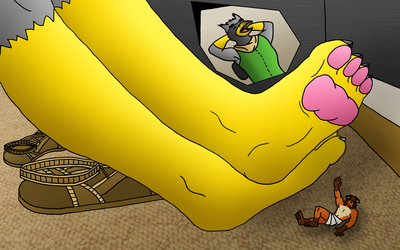 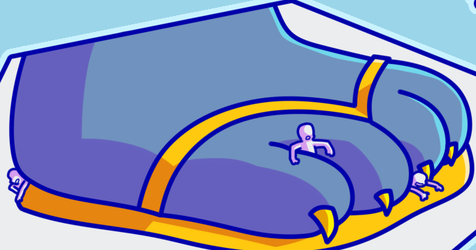 [This story includes both The Predator Plant and The Predator Plant 2: Foot Fun. This was also tweaked for grammar checks.]
So yeah, I had the idea of the plant design for a long while, and here's a story to go along with it. So I thought, why how have a bird for a first meal?

Written by TastyAce, featuring my plant self and minikay as prey~