An Alien's Appetites by Justin1029 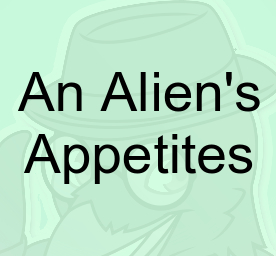 It was the afternoon when the being from outer space came to eat.

Justin was a Tharx: a lavender avian alien whose species was known for it’s massive size—easily taller than any skyscraper; Justin stood tall. He had eyes that could spot even the smallest things far below, spiky, cosmos-colored hair with an assortment of dark blue, silky fur, cat-like ears, and a long, sticky tongue. His claws were magenta-colored and sharp; his feet were lavender, with purple-colored nails, and very soft pads. At the tip of his head was a large beak, and behind him was a long tail with a pointed end. Finally, his chest was adorned with a blue wave-like logo; an eight-shape with long ends.

Yes, Justin was quite a glorious alien. But he was bored. And there was a planet up ahead: Earth. He’d heard the inhabitants were quite tasty—and great to stomp on.

So, he piloted his ship toward the planet. Justin’s ship was sleek and flat, and colored lavender like him. So, it was a surprise to multiple governments when they detected a large, thin ship rocketing down toward earth.

Justin’s stomach growled. He was ready to eat.

TastyAce was writing when the spaceship hit.

He was in his house, working on a new sci-fi story. One with aliens, monsters, battles; the works. But then, he heard a loud BOOM coming from outside. It made his house shake, and his furniture jump; his computer crashed to the floor. The crow cursed his luck and wondered what had caused the shaking. Earthquakes were rare around here, after all. So, he decided to step outside, and see if everyone was alright.

When he stepped outside the door, what he saw shocked him.

There was a spaceship in the field near the neighborhood. It wasn’t just huge, it was massive, taller than any skyscraper or any wonder on earth. The ship looked right out of his sci-fi stories: flattened with sharp edges, and a dome on top for it’s occupant. It was all /enormous/.

And the being that stepped out of it was even bigger.

The dome slid open, and what stepped out of the ship was . . . well, it had to be some kind of alien. It was bird-like and lavender, with sharp claws, hair, and beak. Behind it was a massive tail with an edged tip—TastyAce hoped it wasn’t poisonous, like in his books. As the alien stepped out, it towered up, up, up—into the sky, past the clouds, so it’s head was no longer visible. The only part of it that was visible now was it’s massive legs.

And they were moving.

The alien slowly lifted up his foot. TastyAce watched in awed horror as that foot lifted up, up, higher, /higher/, until it was casting a shadow that covered the entire human-anthro town, blotting out the sun. The foot was lavender and scratched, with a calloused heel and a soft-looking sole. It’s two clawed toes wiggled dramatically, letting light peek through as they moved.

The foot moved quickly downward, toward the crowd of people that was staring up at the alien. Most were screaming and running now, but TastyAce was transfixed by the sight, frozen to the spot, and couldn’t move. He watched as the foot came closer . . . closer . . . it’s right on top of--

The foot landed on the ground with a loud /boom/, trapping people underneath it. TastyAce was sealed tight under a toe, trying to lean away from the rapid foot-smell that was entering his nose. He tried to wiggle out from underneath the foot, but he couldn’t move an inch! He was sealed tight.

The shadow above grew darker, much darker—was the creature leaning down? Was it coming for them—for whatever reason? But then, mysteriously, a new limb came down: this one thin and purple and . . . was that /slime/ on it? Wait, no, it had to be a--

The long tongue went to the people on the side of the foot and /sluuurped/ them up. When the tongue retreated, about thirty people were stuck to it’s sticky surface, screaming, wailing, as they were sent upward. TastyAce tried harder to escape, but he still couldn’t move, and he was forced to watch in horror as the tongue came down again—

This time, it got the people on his left, those underneath the other foot’s two toes, which loosened slightly as the tongue came to collect them. They all screamed out as the wet organ snatched them; some begging for mercy, others begging for their mothers, and some letting out incoherent wails. But the alien either didn’t hear them, or didn’t care, and the tongue grabbed them regardless, taking twenty up to who-knows-where—well, presumably it’s mouth, where they were swallowed up and eaten.

TastyAce shivered at the thought. He made one last, desperate attempt to escape, pushing against the toe, tickling it’s surface, squirming against it. But it didn’t budge. And again, the tongue came down.

It all happened in slow motion. The tongue came closer, closer, closer to it’s prey, like a horror movie, and then pressed against the humans and anthros, one by one. Immediately they were latched to its surface, stuck like flies in a flytrap, and as they were slowly pulled out from underneath the foot, the rest of their bodies fell on the tongue and were stuck as well. TastyAce was forced to lay in an awkward position, his legs and arms stretched out like the spread wings of an eagle, and his head latched to the tongue’s surface.

Then, it moved up.

It was like riding a high-speed rollercoaster. The tongue moved fast, rapidly returning from whence it came, and the breeze blew briskly around the prey as the tongue whipped upward. TastyAce was forced against the tongue even more by the wind, and he felt every disgusting pore on the organ that had collected him—until they finally stopped, and reached their destination.

TastyAce turned. The tongue was hovering outside an enormous open mouth. Each tooth was dripping with drool, ready to receive its meal--/him/. Everyone was screaming now, trying to get the tongue to release them—as if that would do any good, it would only let them plummet back to the ground—but TastyAce still couldn’t move. He only watched, shaking, as the tongue slowly descended into the tomb of a mouth, and the lips closed out any hope of light they had left.

This darkness was worse than the shadows the alien had cast—it was absolute, a warning of what was to come. The alien’s drool released TastyAce and the others from the tongue, but then they were only thrown around the mouth, tossed like popcorn from one cheek to the other, covered thoroughly in spit and saliva in every crevice. By the time the tongue stopped, they and their clothes were all soaked from head to toe—not one area had gone untouched by the hungry being.

The alien laughed, and it rumbled around the tiny beings, making every one of them shake from the vibrations. Then, the tongue pushed them backwards, toward a gigantic hole--/it has to be the throat/, TastyAce realized, right before the monster poked at them one last time with it’s tongue, and gulped them down.

The humans and anthros were pushed together as they were forced down the throat. TastyAce found himself in the middle of the pile, squeezed on all sides by various people as the tight throat made them steadily descend. If not for the discomfort and squeezing, it would have been relaxing, like a bumpy elevator ride. But, of course, elevator rides didn’t end at a stomach—and that’s exactly where this meal was headed.

They exited the throat all too soon, and TastyAce went from being squeezed on all sides, to falling freely in the air—this anthro crow’s wings were not made to fly, and he plummeted down, down, down, until he landed with a /plop/ in the stomach acid. Various people around him were screaming and crying; some were banging on the walls, trying to escape, or at least get the alien’s attention.

But the crow knew there was no hope—he was no longer a person anymore, but a meal for a hungry alien. So he closed his eyes, and let the stomach acid take him.

As he slowly drifted off the permanent sleep, the crow found himself . . . floating? Perhaps he was good enough for heaven after all? But no, he still had his body—what was going on?

He opened his eyes, and found himself sitting in an enormous palm. Looking down, he realized the skin was lavender, and looking up, he realized he was in the hand of the alien—and it was staring right at him.

“Hey, TastyAce,” the alien’s voice boomed. It smiled. “I know you enjoyed that.

“Join me, and you’ll be the one having meals, instead of being one. What do you say?” 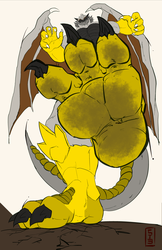 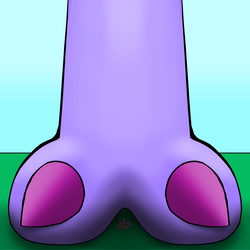 There's a new alien species that has been made, and I'm the alpha. I just heard that there's a tasty place out there in the galaxies, called Earth. Sounds like a good place to find some food. Besides, I'm hungry. And when I get hungry, I have plenty of time to get some food. And also find some micros to keep, for possible intergration or conversion...~

1500 word story commission, made by tastyace, whose crow sona is also featured in this story! I also fixed up this story a bit, so that it flows even more smoothly.
Tharx Justin is of me, with help from minikay~

p.s. I'll have some accompanying pictures to go alongside this, so keep an eye out! Hint, they're made by minikay~