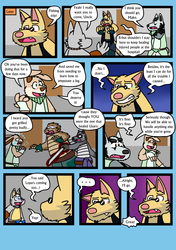 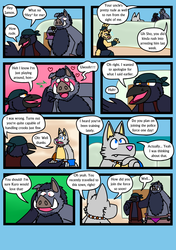 Commentary:
The update on Mako's situation has finally been brought up. Not only have I put it on pause, but even the characters have. That'll be explained later, naturally.

Mako's dialogue in panel 4 is not referring to anything that's already been discussed. If it was, I wouldn't have bothered having him cut off his own dialogue. This is to imply that there's still stuff about Mako he hasn't gotten to explain yet.

There's also an explanation for why Mako just suddenly disappeared, but that's coming up on the next page. Some readers can probably already guess like Lubo has.

By the way he did not use a spell or power to vanish, which is why I chose to represent his disappearance with dotted lines and a question mark. No one would expect a "?" to appear with a spell, right?