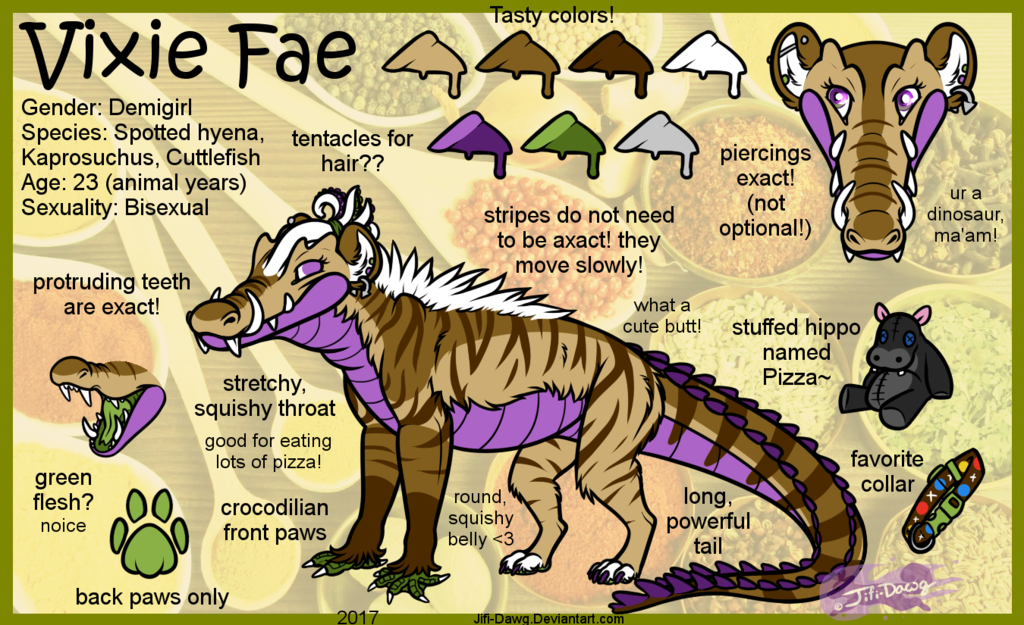 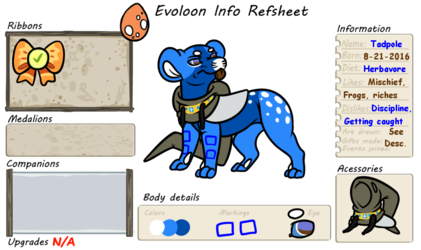 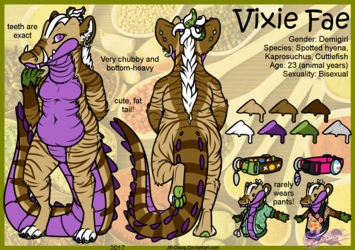 Ech I was gonna get some owed art done before this, but I really needed a pick-me-up. The last few days have been really hard because of some... Y'know, those feelings you bury that just keep coming back? Yeah, those...

Anyways, here's an official ref for my Vixie!

Personality: A lazy, happy blob who just wants some snacks. She's generally very sweet and considerate, doing her best not to step on other's toes even if they step on her own. She's usually very good at reading others and their intentions, and is almost never wrong about who she can trust. Sometimes she seems overly trusting because of this, but others soon find that she was right all along. However, she's not very good at jokes/inuendo/sarcasm/ect.. She's usually the slow one who finally gets the joke a few minutes after it's been told, or will have to ask if someone is being sarcastic. In addition, she's very honest. Maybe too honest sometimes, as she'll give others more than they bargained for when they ask her things. It's very simple for her, if information is asked for, then information should be shared, regardless of what it is. All in all she's a free bird who marches to the beat of her own drum, leaving her heart on her sleeve and following it always.

Facts:
-The "hair" tied in a pony-tail is actually cuttlefish tentacles, and they tend to have a mind all their own, which is why she ties them back.
-If her tentacles are cut or damaged they'll grow back like hair. It still hurts when they are, though.
-The light purple underside looks like scales, but is actually very soft and squishy, like a cuttlefish, and can change colors depending on her emotions and environment.
-Her stripes have a habit of "moving" by growing in different directions every time she sheds.
-Her thumbs are opposable, even in feral form.
-Because of the mixture of hyena, kaprosuchus, and cuttlefish, she's very flexible and limber.
-On occasion she'll take a "Jacob Form". When this happens her back feet become goat hooves, her snout changes to resemble a sheep with kaprosuchus teeth, and she grows four horns, two straight back and two curved like a ram. Changing into this form is completely up to her and there's no trigger for it.
-In anthro form she's much chubbier.
-In battle her weapon of choice would be two one-handed battle axes, but she can also wield crude blunt weapons.