Suger - A TFTG tale for HanDolphin by Jade Moontail

As he waited for the pizza he ordered to be completed Kevin couldn’t help but be bored. Even the games on his phone didn't seem to help pass the time. "Will was right, should of just ordered it from his place, at least then we could of played some video games to pass the time" he groaned under his breath. He knew the order wouldn't be done for at least another twenty minutes, he had already waited ten. He silently cursed at himself for forgetting that the pizza place he had planned on ordering from had a minimum wait time of half and hour. Kevin knew if he didn’t find a way to pass the rest of the time he would go mad, it was pouring down rain outside so he couldn't walk around the block. He was about to open the app store on his phone to try and find a new game to download when he spotted a shop he had never seen before. "Cammile's Curious goodies" was its name, it looked like it was one of those artisan confectionery shops he had read about online. "I'll be right back for my order, just going across the street" he said to front counter of the pizza shop before heading back out into the rain.

After a quick dash across the street Kevin was inside the shop just as soon as the rain started pouring harder. "Damn, I wish I remembered my umbrella" he said as he looked out the doors glass window. "Funny I thought you looked like a person who didn't mind being wet" A women giggled from behind him. He turned to see the shops owner behind the register "Sorry couldn’t help myself, I'm Cammile" she said with a smile. "I'm Kevin, nice place you got here, I bet your not getting to many customers today with the rain storm" he said returning the smile as he looked around the small shop. "Well they are missing out on my buy one get one free rainy day sale" she said with a smile. Kevin nodded as he started to look around her small shop "I'll see what you have, got any suggestions?"he asked as he looked at a display of hand made chocolate kisses. She giggled softly "Well if you want I can gaze into my crystal ball to tell you the best products for you". Kevin looked at her skeptically as she pulled out a small crystal ball from her pocket and waved her hand over it. She giggled softly "For you it suggests Delphine chocolate, and for your friend waiting for the pizza Draco Cola since he likes dragons". Kevin did his best to not show he was surprised at her accuracy but assumed it was all lucky guess work "I'll take them, how much?" he asked as she put the products by her register "Five dollars" she replied. Without a second thought he handed her the money and thanked her for the suggestions before heading back out into the rain to go get the piza he was sure was ready to be picked up, as he opened the door Cammile shouted another suggestion "I suggest you wait until you get back to your friends apartment before eating it, trust me you will find it much more enjoyable then."

After picking up the pizza and quickly getting into the car he decided to look at the stuff he bought at the confectionery shop, he felt a little silly for not looking at them before buying them. The bottle of Draco Cola was a rather generic bottle green and its logo was simply a solid green dragon in profile with the words "Draco Cola" in fancy story book print surrounding the dragon. He chuckled softly "Looks just like it came out of a picture Will commissioned a while back" he said as he put the bottle back in the bag and grabbed the candy bar. When he looked at the candies wrapper he had to do a double take, the image was of an anthro dolphin girl in a bikini. The top of which was untied and falling off as she held it to her chest teasingly cupping her breasts as she looked at the viewer of the image. "I am keeping this wrapper" he chuckled to himself as he put the candy back in the bag and turning the ignition and heading back to the apartment.

"It's about time you got back, I told you we should of called in for delivery" Will said as he opened the door of his apartment to let Kevin in. "Yea, yea, but if I did that I wouldn’t have been able to get you this" he responded handing will the green glassed bottle of Draco Cola. Will chuckled softly as he looked at the bottle as Kevin put the pizza down on the living room coffee table "I see you didn't get a bottle for yourself, I have some soda in the fridge if you want any" Will said as he popped off the cap and took a small test sip then a longer drink after eating a slice of the pizza. "I got myself this chocolate bar, has a sexy anthro dolphin on its label, I think the lady who made it is a furry" he said as he walked into the kitchen to get a soda for himself. As he walked out of the room he carefully opened the candy bar to insure the wrapper could be saved before taking a large bite out of the chocolate bar. He was amazed at the taste of the chocolate, it was like no other chocolate he had ever tasted. He nearly inhaled the rest of the bar as he opened the fridge to get a soda. as he reached into the fridge he heard the sound of ripping fabric coming from the living room, "You okay in there Will?" he called out a he grabbed a can of cola from the fridge. He was shocked to hear a slightly embarrassed female voice reply with "Well that depends on your definition of alright". Confused he left the soda in the fridge and ran back into the living room to find Will replaced with his very curvacious green dragoness character. The only things identifying the dragoness as being previously Will was his torn up clothing that did nothing to contain her massive bust size as well as his earrings and glasses.

Kevin looked on in disbelief "You... You turned into your character!" he said blushing as she stood up from the couch taking off what remained of her clothing and dropping it to the floor, smiling softly as she blushed looking over her nude form. "Um... do you want me to give you some privacy?" Kevin asks trying not to stare as she experimentally cups her breasts, not noticing that some of his skin was starting to take on a cetacean sheen. "If you want too, the damage is already done since you have seen me naked and it, you can watch me try and get something to fit me" she said, ending her sentence in a teasing tone. Before Kevin could reply another loud rip filled his ears as his pants backside exploded outwards with a mix of expanding butt, hips and dolphin tail. Startled he let out a noise that as far as he knew only dolphins made. As he reached for his mouth he felt a dolphins beak growing in place of his mouth and nose. He blushed as he watched a pair of breasts press out of his shirt as a new dorsal fin ripped out the back. He let out a small sharp female gasp as his gender inverted signifying the end of his change.

The new female dolphin fell to her knees panting "Oh man... Must of been the soda and chocolate we ate..." she said as she stood back up slowly trying to keep what was left of her pants on her body "Good thing you were sitting down when you changed... It makes you legs weak for a few seconds" She said as she stood up. Jade nodded softly "You know you don't have to keep your new body covered, I mean you cant keep holding up those pants forever, lets see more of that sexy dolphin body Hannah" Jade said as she teasingly smacked Hannah's exposed rear end. She blushed heavily and the smack and Jade's words but despite her embarrassment she did as Jade asked. While curvy in her own right Hannah didn't mach up with Jade in the curves department, but what she had was enough to turn anyone’s head if she strutted around naked. She did her best not to stare at Jade's naked body, a little surprised how well Jade was taking suddenly transforming and becoming exposed for all to see while she was clinging to what clothing remained on herself. "Come on, its just us girls here" Jade giggled as she sat back down on the couch. Hannah giggled softly at Jade's comment and nodded softly and let her pants fall to the floor and took off what was left of her shirt and tossed it to the floor "Yea, just us girls" she said with a smile, a hint of embarrassment in her voice.

Hannah smiled as she looked down at her new breasts before cupping them and squeezing gently "You know this isn’t so bad" she said softly as she felt over her nude form before gasping as Jade hugged her from behind, the dragonesses large breasts pressing into her back. "Lets finish the pizza we got and then we can check some of my old baggier clothing to see if we can find anything we can alter to fit us, or we can do the clothes first if your eager to redress" Jade said as she placed her hands on the dolphins hips. "Um... clothes can wait" Hannah said still blushing softly as Jade let go and grabbed another slice of pizza before sitting back down and patting the seat next to her "Sit down here, I'll let you choose what we watch on TV" Jade said with a grin motioning to the remote control next to the spot she patted. Hannah giggled softly and sat down and turned on the TV "Bet your glad I went out to get the pizza and found these instead of staying here and ordering" Hannah said with a giggle as she surfed channels for something to watch. Jade giggled softly and kissed her on the cheek "I hope that answers your question hon" Jade said with a grin as she finished the last of the soda that changed her before getting up to get a new soda from the fridge. As she stood up Hannah giggled and took the opportunity to playfully smack Jade's plump ass "I am glad I did too" she replied with a smile. 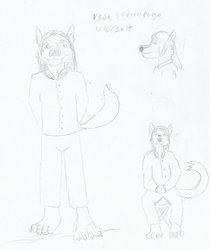 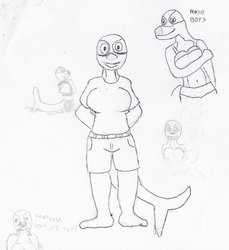 Suger - A TFTG tale for HanDolphin