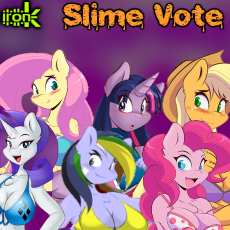 The chattering of the studio audience died down as the lights above them dimmed to signal the end of the commercial break. At the signal from the director, their noise turned back to cheers and applause, which the navy bird behind the polished wooden desk on stage acknowledged with a wave of his hand.

"Welcome back to the party!" he called above them, and ran one hand through his puff of white fluffed hair as he waited for the noise to subside. "For those of you who have just joined us, we've got our most crowded interview couch ever tonight - the whole Mane Six are here and they've been talking about what's coming up in their new season, which I hope does great, once again..."

He was drowned out by renewed applause from the studio audience, directed towards the group of six equines huddled on and behind the red curved couch opposite Rossi's desk. They gave some smiles and grins in acknowledgement, with the pink pony standing nearest to the audience putting both hands up and clapping her hands in the air enthusiastically along with them.

The bird behind the desk joined in as well, slowly clapping as the noise died down, then returned his hands to the desk in front of him. "But before we say goodbye, we wanted to do something special for you - with as big a cast as your show has, is there ever any rivalry behind the scenes?"

"Oh, loads," giggled the pink equine standing at the back. "But it's never serious..."

"Yeah, I think we all get on really well," the purple alicorn in the middle of the couch joined in, the others nodding around her. "Especially as we're all so close... that's what's the show's about!"

"Although Rainbow here's kinda brash sometimes..." the brown pony behind her said in a heavy Southern accent as the others nodded, putting her muscular arm around the blue pegasus standing beside her.

"Okay, okay..." Rossi waved his hands down as he began to rise from his chair. "So you resolve things amicably - what you're teaching people is really great. Unfortunately... it's not what our show is about!" He took a couple of steps over to the back wall of the set, where a polished lever jutted out of the wall next to a curtain draped over a gap.

"Oh, noooo..." The white unicorn sitting daintily on the end of the couch whimpered, her hands going up to cover her mouth as she shuddered a little. Her pink friend behind her reached down and rubbed her shoulders, a huge grin plastered across her face.

"Yes, she's guessed it - let's bring it out!" the bird announced as he tugged the switch down. As a snatch of the show's theme music played, the red curtain across the gap beside him drifted aside, revealing the show's most infamous fixture - a six foot tall booth that was made up to look like an ornate hotel phone box. As it slowly slid out on to the stage on its rail, the six guests glanced at each other, sharing shocked looks and exclamations that were inaudible under the audience's cheers. On the end of the row, the pink equine stared awestruck over at the booth, her mouth agape as it slid to a halt.

"Okay!" Rossi smiled, dusting his hands off as he stepped around the booth, looking up at its roof. A clear cylindrical tank was visible on top of it, more than a foot wide and tall and filled to the brim with a cloudy mixture of opaque coloured slime. "Wow, I hope our make-up department didn't spend too long on you..." he continued, smiling at the girls' much more nervous laughs.

"So I think all of you know how this thing works - unfortunately we've only got room for one, but in a few minutes, one of you is going to get a very quick and very dramatic makeover. We..."

"Do we get to decide who it is?" the blue pegasus with rainbow-coloured hair interrupted, poking the brown pony beside her in the flank.

"We'll make sure you get a say - but we thought we'd let the audience decide your fate," Rossi said, pointing out towards the stands as the watchers cheered. "Now, this is going to be the biggest vote we've ever done - so look on the bright side, that means... you know, mathematically, as a group you're going to get less than twenty percent messier..." As he said it, isolated cheers rose up from several members of the audience, blending into a laugh as Rossi glanced confusedly up at them.

"We'll let them make their own entertainment for now..." he shook his head, then readjusted the lapels of his suit as he moved back to the desk, turning his chair around as he sat back down. "Who's got the microphone?"

The girls glanced at each other as the colourful-haired pony in the middle of the back row held up the hand mic that had been passed around between the group during the interview, waggling it in the air.

"Great," Rossi continued. "So before the audience votes, I just want you to pass that around and each say a few words as to why you shouldn't be the one who goes in the gunge tank. Ms. Rainbow, do you want to..." As he spoke, the white unicorn on the couch stretched up behind her and yanked the microphone out of her sky-blue friend's hand, pulling it towards her.

"Okay, I guess Rarity's starting us off..." Rossi corrected himself as the prim white equine turned to address the audience, her hand going up to her hair.

"Are you kidding me?!" she said in a refined accent, half-laughing at the audience's jeering reaction. She patted her blue hair, arranged into long scrolls around her head. "I got all done up for this tonight - how long's it going to take to get this back to normal again after that? After all I've done to make the world a prettier place..."

"Heh, green could be your new look this season, Rarity..." the brown pony standing at the other end of the row behind the couch butted in. She tipped her wide Stetson hat at the laugh from the audience, grinning down at the unicorn as Rarity turned around to face her with a gasp. The purple alicorn in the centre of the group reached tentatively for the microphone, and the unicorn handed it to her distractedly as she sat back on the couch, folding her arms.

"Um..." the purple equine started, glancing to her left and right at her friends watching her. "Well, I don't think I deserve to go in, and I don't think anyone wants me slimed! I was always a good student, I think my own students like me, and I've helped all of us through so many episodes..." She looked around at her friends, hoping for encouragement, but not getting a reaction. "And, um..."

Faltering, she whimpered as she looked over at the booth, then glanced up behind her as inspiration struck. "Anyway, you should do it to A.J.!" she gasped, pointing up at the brown pony behind her with a smile. "She doesn't mind getting mucky on the farm..."

"Wow, Twilight..." Rossi chuckled, shaking his head. "I thought you were meant to have learned about friendship - I never thought you'd be the one to drop someone else in it..."

Twilight sagged, shoulders shaking in a silent laugh, and as Applejack reached down for the microphone she passed it up to her defeatedly, putting her hands under her long straight hair and running them through it.

"I'd say the audience wants to put in someone who's gonna actually care about gettin' dirty..." the blonde-haired pony smirked. "Someone like a perfect goody-two-shoes student..." There was a mixture of boos and cheers from the stands as she put her hand on Twilight's shoulder, who closed her eyes and giggled as she shook her head. "Or our fashionista friend!" she continued, pointing down at the unicorn who had spoken before and drawing renewed cheers from the audience.

"Okay, I think that's enough out of you..." Rossi smiled. "Let's give Fluttershy a chance to say something - can you drag the conversation back up again?"

Applejack obligingly passed the microphone down to the yellow pegasus with pink hair who was sitting on the end of the couch in front of her, who had been the quietest during the interview. Timidly, she took it and cleared her throat as she held it up in front of her.

"Oh, Fluttershy..." Rossi spoke up again as there was a swell of disapproving noises from the audience. "We love you but I think you're dreaming if this lot are going to let you get away with that..."

"Nnnf..." the pegasus shuddered. "Well... you know I have to take care of the animals, and I don't think they'd recognize me after getting put in that thing..."

"Yeah, that's fair enough," Rossi nodded. "Want to pass that back along to the others?" he pointed. "That's it..."

The rainbow-haired pegasus was the next to get the microphone, drawing herself up to her full height as she stood behind the middle of the couch.

"C'mon, are you serious?" she started boisterously, the polar opposite of the shy equine who she had taken the mic from. "I'm gonna give you one good reason - these," she said, turning around and reaching behind her to point down at her wings with her thumb. "How am I gonna keep the title of best flier in the kingdom if they get slathered in guck?"

"Yeah, that goes for me and Fluttershy too!" Twilight spoke up again.

"Hmm..." Rossi tilted his head to the side. "Yeah, I sympathize with you there - although I hope it's a point our audience is happy to ignore." He staightened up and cleared his throat. "One more! Pinkie, do you have anything to say for yourself?"

The pink pony standing on the end of the row leaned toward the microphone as Rainbow Dash held it towards her, but she didn't take it, instead keeping her hands on the back of the couch, gripping it tightly.

"Uh, I..." she stuttered into it with a huge smile, her eyes fixed on the gunge booth as she quivered. Eventually, she just giggled, standing up straight again and shaking her head as she bounced on her heels, making her puffy darker pink hair shake back and forth.

"Okay, nothing from her!" Rossi laughed. "So that's all of you - personally I think you've all made very good cases and I wish you luck..."

He paused as the girls huddled around the couch glanced around at each other again, a couple of whimpers and giggles going up from them.

"But only our audience can decide, so let's have the moment of truth," the bird continued, swivelling to address the stands. "The fate of these ladies is in your hands - vote now!"

gungewolf for the title ;) I don't know what I'd do without you.

Yes. I've sinned. And I hope you can forgive me. This is a scene I wrote when I was extremely tired - Rossi's guests on Friday Night Party this time are the My Little Pony crew, and one of them is about to get an unforgettable experience.

For anyone who hasn't seen one of these before - it's simple, you the audience get to decide which guest has to go into the booth and get covered in slime. Let their defenses swing you however you like :)

I'm collecting the results in a Google form this time WHICH CONTAINS SOME NSFW INSPIRATION - go here to decide! You can even vote for more than one of them if you like. I'll keep you updated on how the results are going throughout the week...

mastergodai's renditions of the cast :)