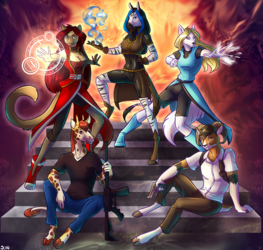 This is the version of Lauren found in most parallel universes in this reality cluster. While there are variations between each version as is common in a multiverse this is considered to be the most central example of this form.

Lauren's personality is considered to be generally gentle and non aggressive, though she is willing and able to use force when required. Often seen with Isabelle Sheridan, she is frequently operating in a central role of Talwyn events in most parallel universes.