The King's Pet by iconmaster 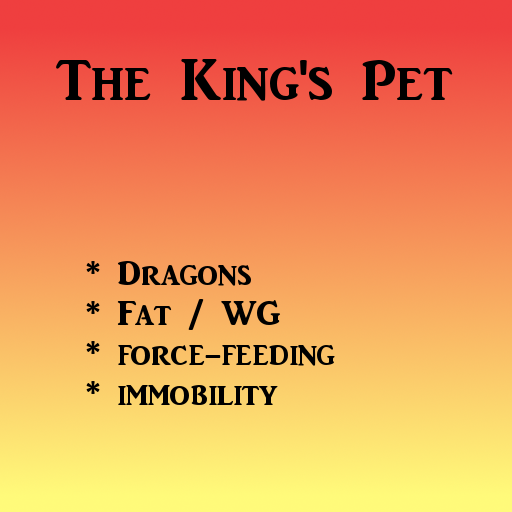 “Come on, let’s line up, now!”
The great King Tuck waved his arms to and fro, trying to get the disorderly meeting of dragons to assemble. He himself was a dragon; anthropomorphic and purple-scaled. At that, he had a kingly figure; his beige-scaled stomach poked out ever so slightly from his regal robes. It jiggled ever so slightly as he shouted to the crowd.
And the crowd did assemble. Before, there was a group of both anthros and ferals, mingling. The ferals in question were the group of Tuck’s newest additions to his castle. They were exotic pets, captured from the distant North and brought here at quite the expense; all worth it, of course. Keeping the ferals in line were the anthros, each one was one caretaker for one dragon.
Today was his weekly inspection. He decided soon after getting them that he wanted to make sure they stayed in their best form- And, of course, he wanted to see the fluffy dragons up close as much as possible. And so, when he gave his command, they formed an orderly line, handlers by each feral’s side.
He started at one end of his throne room, locking eyes with one blue dragon. He looked at the feral’s side, up and down. The furred dragon meeped nervously as Tuck remained silent. After a second, he raised his hand and scritched the dragon’s fur on his neck.
“Looking good!” The king grinned as the furry dragon ruffled his neck fur.
Moving on down the line, he looked at each one in turn, giving words of encouragement and excessive pets. For the most part, his pets were in wonderful health, their coat full and body toned. However, the story was a bit different for the very last dragon in line.
“You’re looking… Well-fed.” Tuck said. All he had to do was simply glance at the beast to tell this; the red dragon’s cream-furred underbelly was quite noticeable against his sides. The dragon in question looked away and blushed at the comment.
Tuck looked over to his handler, a grey-scaled dragon, who was smiling nervously. “David… how’s his diet?”
“Well… Healthy as usual! Only giving Nixx here, uhh, reasonable portions!” David replied, chuckling nervously.
Tuck thought for a moment, patting Nixx’s side. It shook ever so slightly, giving the king an indication of the amount of fat covering Nixx’s gut. “... Must be his metabolism! A good eater like myself, huh?” Tuck said, laughing and patting his own middle.
“He really is, sir!” David said, still smiling.
“Well, we’ll just just have to get you some exercise.” Tuck said, looking at Nixx as he talked. Nixx snorted softly, eyes wide.
David frowned for a second. “Of course, sir. I’ll devise an exercise regimen… Right away!”
“Good, good!” Tuck said, turning around to face the crowd of dragons in the room. “Very good work, all. You are dismissed!” With that, the crowd murmured and broke up, handlers leading the dragons back to the stables. David watched as Tuck strode away, looking pensive.
“Now to talk with the mages. I wonder if the project’s done yet...” David heard Tuck mumble as he walked off, heavy robes trailing behind.
Nixx looked up at David, looking a little worried. David patted a hefty shoulder and smiled warmly. “Now, now, it won’t be so bad… You know I’d never let you go hungry. Now, let’s get going.”
Nixx slowly padded along, sighing. “Oh, you poor thing… Maybe this can cheer you up?” Grinning, David rummaged in his trouser pockets as we walked. Eventually, he produced a small pastry. David barely was able to present it to Nixx before he put his jaws around David’s hand, grabbing the treat and pulling away. With a heavy gulp, it was gone.
“There we go...” David patted his charge’s neck, Nixx purring.

“So, first we’ll start with some laps. You’ll need to do some running, and… Are you listening to me?”
Nixx was curled up, looking the other way while gnawing on his current meal, a large cut of pork. At David’s words, he turned his head, meat still hanging out of his mouth. “Mmmph?” he trilled.
They were in the castle courtyard, an expansive stretch of green in the middle of King Tuck’s domain. It was a little too warm out for Nixx’s taste (which was pretty much true for every day for him), but for David it was just right. And so here David took his dragon out to exercise.
“So I want you to do laps around the outer path. Got it?” David reached over, poking Nixx in the middle lightly. His claw was able to sink in for a second, dimpling the gut.
Nixx nodded his head slowly, all the while snapping up the last of his meal. Down it went with a gulp. Slowly and glumly, Nixx got onto his paws, stretching.
“I want a good trot!” David said, “And if you do well… I’ll be sure to get you something extra to eat...”
With those words, Nixx’s ears perked up, color suddenly returning to his mannerisms. He looked at David expectantly.
“Well, if you want it… Go on!”
With a lumbering start, Nixx scrambled into a fast trot, breathing heavily. David gave a cheer, and watched as Nixx got smaller in his vision. He could clearly see his gut wobble back and forth as he went, though, making David let out a giggle.
By his first lap, Nixx was looking tired, head sagging as he tried his best. The second lap through, he was panting. The third lap took a lot longer- by the time he reached David once again, he was pretty much just walking. Nixx snorted and sighed as he approached his handler.
“Only three laps?” David said, grinning. Nixx huffed and glared at the grey dragon.
“Only three laps… Is a lot! Good job!” He said, changing his tone quickly at Nixx’s derision. Nixx whumped his rump to the ground, sitting up but still panting.
David walked over to the big dragon and gave him a pat on the back. “You did your best. Now… Want to grab a little treat? I promised, after all...”
Nixx’s ears perked up. He slowly got up, stomach still sagging between his legs.
“Let’s grab something from the store room! I’m sure they have something good in there...” David said, motioning Nixx forwards, who padded along slowly.

David huffed as he climbed up the steps to get to the top of the contraption. As a royal dragon attendant, he thought it was his duty to check on his charge as often as possible!
The apparatus was a giant wooden frame, created to fit its user as they grew. As David rounded the top of the steps, he caught a glimpse of Nixx, inside the thing as usual. He climbed right on the red, fuzzy flab and crawled over to Nixx’s head.
At this point, Nixx was much larger than the stock room that started this whole thing; his flab already threatened to spill over the wooden frame keeping him in. At first, David used thick rope to keep Nixx from misaligning, but he found in a few days Nixx was too heavy to move anyways. At the center of all this dragon fat was a muzzle, sunk right in his ten chins. Leading right into the thing was a wooden track, long and filled with all sorts of food. David watched as the Nixx muzzle poking out opened, letting a whole cooked turkey slide right in, the other food sliding down to take its place. With a gulp, it was gone, and Nixx opened up again.
David sunk into the fuzzy flab as he lightly made his way over to Nixx’s snout. He laid himself down right next to Nixx’s many chins, feeling the wobbles as he got comfortable.
“Wow. They sure made a lot of cloned food, huh? We’re not even CLOSE to running out.” David said, looking at the huge wooden tower attached to the food ramp. “It was going to solve all those food problems, too. Shame the peasants didn’t want it.”
Nixx responded by gurgling between gulps. With the ramp as it was, Nixx couldn’t stop eating. David liked to have many of these one-sided conversations…
He continued. “Look at you now. Can you even wiggle your legs anymore?” He said, chuckling as he gave Nixx a good slap, watching the flab jiggle.
Nixx mmphed in the negatory.
David grinned. “That’s fine, I suppose. Feeling full?”
Nixx tried to nod, but he couldn’t among the swaddling rolls of fat. He mmphed instead.
“Well, you’re just going to get fuller and fuller.”
Nixx could only blush as the next batch of food slid into his maw. 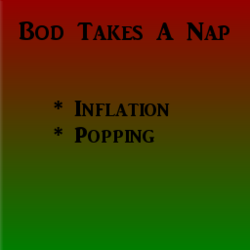 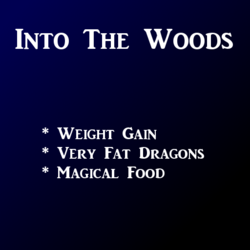 In the kingdom of the fair King Tuck, something new has happened. The King now has very rare dragons as pets! David is the handler for Nixx, who together get in quite a bit of trouble. Trouble that makes Nixx's waistline grow and grow...

This was a story that Nixx won as part of a little raffle I did on FA. With a guest appearance from Grimbler!