A Softhearted Prize [CM] by Hukeng 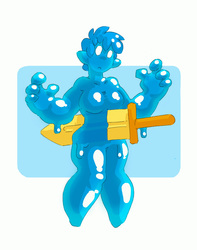 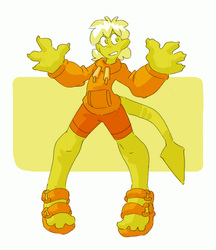 Commission for yowza, who also wrote the narration to go with it.

"Wow! Great shot young miss!" The booth attendee calls out in surprised delight, twirling his cane and turning to the young woman before him. "Why, I do believe with a throw like that, you are more than eligible for one of our top prizes." He says much to the woman's own, silent delight. "So... what will it be?"

The woman keeps her expression steady and cool, eyes wandering along the rows and rows of trinkets, toys and stuffed animals. "That one." She says, trying very hard not to blush as she points at the black and white animal by the end - a cute and fluffy little husky plushie.

"Oh? That one?" The attendee's eyes glimmer in amusement, but thankfully refrains from pointing it out to grandly. "Very well." He smiles charmingly and twirls his cane once more. "One soft and huggable top prize for the young lady here coming right up!"

The young woman smiles at the thought of the prize, feeling a warm, fuzzy feeling blooming inside. Yes, she might have an image to uphold, but even she can allow herself some leeway at times like this. She's just won the top prize at a carnival! And it's an adorable little plushie to boot! Why, it's making her feel all kinds of giddy and good.

Her smile widens along with the fuzzy, warm feeling swelling in her chest like a comforting hug and radiating out like soft cotton, gently filling her up and stretching her skin like the fabric of a -

"Huh?" She blinks and stares down at herself with a start. "W-Wuh?!" Her hand is swelling and thickening, the skin stretching and growing a fuzzy white color - like a paw! "W-What is- my hand! Why...?!" But it's not only her hand. As the strangely nice and comforting fuzziness grow and spread into her extremities, they swell and stretch, almost as if she is literally filling up with something.

Yet aside from the warm fuzziness, even as her ears stretch and swell, migrating up the sides of her head, even as her ankles, then her legs and thighs swell and thicken like her paw-like hands, and even as her nose stiffen and stretch, elongating out into a huskie-like snout, she does not feel any different. Her hips widen, her thighs grows fuller and her bust increases, but aside from a warm fullness, she can still move.

Despite being literally stuffed into the form of an oversized and admittedly shapely husky-woman-doll, with seams lining her fuzzy, fabric-like skin, her clothes remain whole - if slightly adjusted, and the young woman remains herself.

"Oh dear. My deepest apologies young lady. I had assumed someone had explained our grand carnival's many little quirks to you, or at least handed you a pamphlet." The attendee's voice quickly catches the bewildered and a little startled young plushie-woman. "There is no need for fright however! Our prizes are designed solely for the winner's desires in mind, so should you really will it, you can put it all back inside." He points at her chest with his cane.

"Ah... I see." The still somewhat rattled young woman nods, looking herself over and experimentally flexing her paw-hands - but without changing back.

"And if I may say so... Good choice, miss. It fits you right to a thee!" The attendee grins charmingly. "You really should let out some of that warm, huggable nature at times."

A brief smile plays across her features and she mumbles with a light blush "... I'm not supposed to be this huggable..."