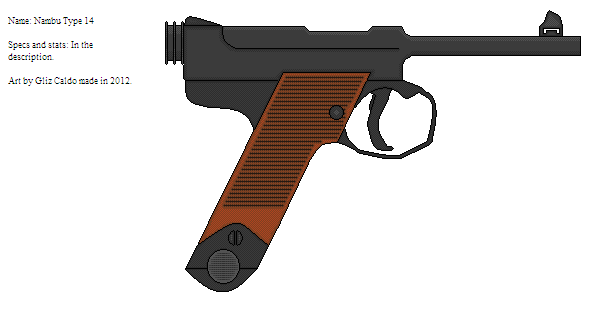 The Nambu pistol (南部拳銃 or 南部大型自動拳銃 Nanbu kenjuu or Nanbu ōgata jidou-kenjuu) was a semi-automatic pistol used by the Imperial Japanese Army and Navy during the First and Second World Wars. The pistol weighs two pounds and has two variants the Type 4 and Type 14. The Nambu takes 8mm caliber ammunition. The design of the gun stock spring in the magazines are weak, resulting in jams (Low Malfunction Number) and the caliber of amunition is weak, however it is low recoil and highly accurate (+1 to Base Attack).

Note: Comes with standard Nambu Type 14 8 round magazine upon purchase. +1 to Base Attack Bonus from low recoil ammunition. The gun is light weight and all it's extra magazines are cheap. Ideal gun for a back-up when your sidearm is out.

Description:Low-Capacity Magazines do more than just carry less ammunition. They lower the weight on you (This magazine is 0.0 LB ) and it is is the most cheapest magazine on the market to buy for your gun. So you can have plenty of magazines and reload in battle plenty of times before you have to re-load the magazine.

Description: Standard magazines come with the gun at purchase, because any merchant who sells you a gun without the magazine is probably a scammer or gave you an upgraded gun. The magazines are heavier than the low-cap ( This magazine is 0.5 LB ) but last longer.

Description: Drum Magazines hold the most rounds you can have for detachable box magazines and they are heavy ( This magazine is 2.0 pounds). Though they have a long use and heavy, they are idea for heavy gunners and thus they give +1 to SPR

Other information founded by researching.

Before you ask me how can the Nambu get a drum magazine? Well just imagine a little box attached to the bottom of the Nambu. Also there is that kind of magazine choice for ever gun that I had made D&D stats for. Oh and by the way if you are going to use this in a role-play, let me know so I can see how well it is doing. I had to make the stats based off of what the Nambu can do, so I am not sure if they are good or not.