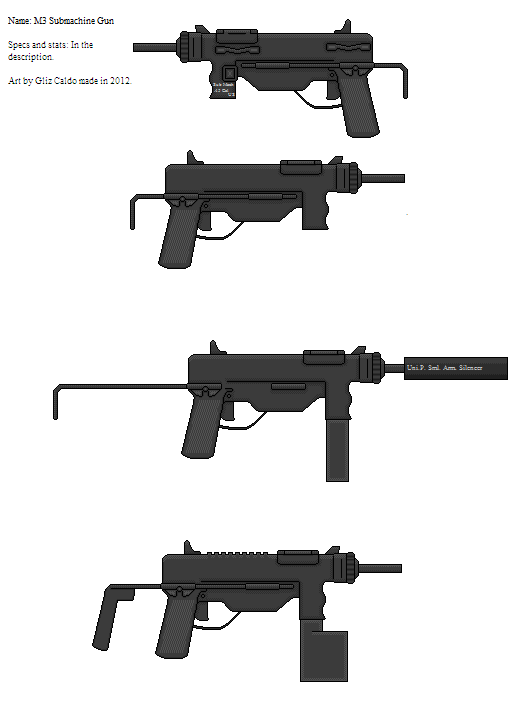 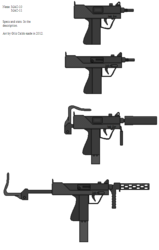 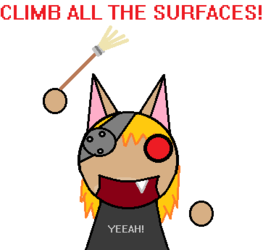 The M3 Sub-Machine Gun 'Grease Gun' is a .45 caliber American firearm. Adopted for U.S. Army service on 12 December 1942. M3 weighs eight pounds. The first customized M3 has a Universal Purpose Small Arm Silencer made by a future company. Third image features the fore-grip convert for the retractable stock, the drum magazine built for the gun and a gunsmith had built a rail system at the top.

Note: Comes with standard M3 standard 24 round magazine upon purchase.

Effect: A silencer that is made by a company that is enthusiastic about the re-use of old firearms and also to make attachments that are flexible for different firearms if they fit the description of small to large firearms. The silencer makes it so that your weapon is silent so no enemies will hear the shot. Silencer lasts for fifty shots before it wares out.

Effect: A conversion for a retractable stock to become a grip to steady aim. +1 to Base Attack Bonus.

Effect: Adds a rail mount onto your gun that does not have a rail built in. Can only hold on attachment at a time.

Description:Low-Capacity Magazines do more than just carry less ammunition. They lower the weight on you (This magazine is 0.5 LB ) and it is is the most cheapest magazine on the market to buy for your gun. So you can have plenty of magazines and reload in battle plenty of times before you have to re-load the magazine.

Description: Standard magazines come with the gun at purchase, because any merchant who sells you a gun without the magazine is probably a scammer or gave you an upgraded gun. The magazines are heavier than the low-cap ( This magazine is 1 LB ) but last longer.

Description: Drum Magazines hold the most rounds you can have for detachable box magazines and they are heavy ( This magazine is 6 pounds). Though they have a long use and heavy, they are idea for heavy gunners and thus they give +1 to SPR

SPR: Shots per round, the number placed in SPR is how many shots a gun can fire per round. The M3 fires with .45 ammunition. The SPR for that gun is 2 and the ammunition makes the damage 1D12. Each bullet is fired, and the numbers are rolled.

Example: The M3 with .45 ammunition fires. The gun fires twice hits at the the torso of the target. Damage is rolled for the gun. Rolling a 5 at the damage, the gun was fired twice making the damage 10. However there is a cost at shooting in bursts, the gun's quality goes down, and lowers the malfunction number by how many bullets were fired.

BR: Base Range, in the measurement of yards this shows the most effective range of the firearm. On the map with figures, each square is equal to five yards. So a M3 would have a range on the map of five squares.

Malfunction Number: Simply health points for the weapon. Every time you fire, the parts of the gun dirty from spent powder and come closer to wearing down. Cleaning the gun will replenish the maximum of the malfunction number, but however to make the malfunction number go back to max you need to do some repairs or replacement. When failing a malfunction check, the gun jams and it will take 1D6 combat rounds to fix the gun. If there is a broken part in the gun, the firearm will cease to function unless maintained. Example, if the MAC-10 fires till it jams, the player rolls a D6 to get a three. In three rounds the battle still continues and the gun is finally freed of the jammed bullet and can fire again. If the gun malfunctioned again, and the DM described the trigger moved around too loosely and there's a crinkling noise from cocking. Once at the work bench, the gun's trigger is broken and the spring is set off. The player will have to attempt to fix the gun, but will lower the maximum malfunction number at a percentage or take it to a guns smith at a price to make it good as new.

Information based off of the Cthulhu Now firearm rules.

Other Information founded by research.

This for Dungeons and Dragons or any role-playing games. You are free to use these, but please tell me you are going to, I might want to join into the campaign you are planning. ;)