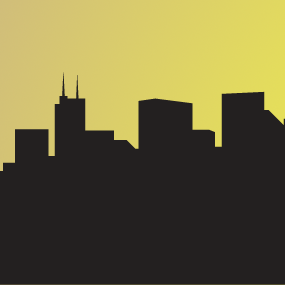 The lemming looked down.

Tears ran down her face. How had it come to this? Things seemed to be going so well... so well. But it all came crashing down around her. She thought about her boyfriend... well, ex-boyfriend now. How he led her on, seduced her, and within a week, everyone knew.

They told her, do as your ancestors did, and throw yourself off a cliff.

So here she was, at the bluffs. It wasn't going to end, unless she ended it.

She shivered. It was a cool night, and she was barefoot, with just a white sundress to keep her warm. It wasn't enough, but things like dressing for the weather were soon not going to be her problem.

She backed up from the edge.

She took a running start.

The bluffs sped by underneath her. Her stomach lurched. It was just like those 3D movies, where they pan across the landscape, only she could feel gravity pulling her down, feel the wind whipping her sundress against her legs. The ground below was motionless and implacable. It would not yield to her.

It was going to hurt.

She screeched, halfway to her destination, and regretted everything. It didn't even sound like herself any more, like she was already half out of her body.

Or was that herself? She felt a shift in consciousness, and a voice in her ear. She felt... wings? A beak?

She spread her wings and flew.

The lemming looked down.

She should been down there, broken, at the bottom. Instead she was back up here.

"My child, why would you ever do such a thing?" came the voice.

"Who are you?" said the lemming.

"A spirit," said the voice. "I lost everything, so long ago. My husband died and without him, I felt like I had nothing. I threw myself off this cliff a century ago. I have had a hundred years to regret the decision."

The girl sat down on the ground.

"They were my wings. I was an owl. You cried for help, and I bound myself to you to save your life."

"Your kind eats my kind."

"I have not eaten anything in a very long time."

The lemming looked up at the sky.

"You do what you have always done, my child. You live. I will be here for you, now. Perhaps between the two of us we can find out what happens next in this life."

A drabble about life, death, and everything in-between.