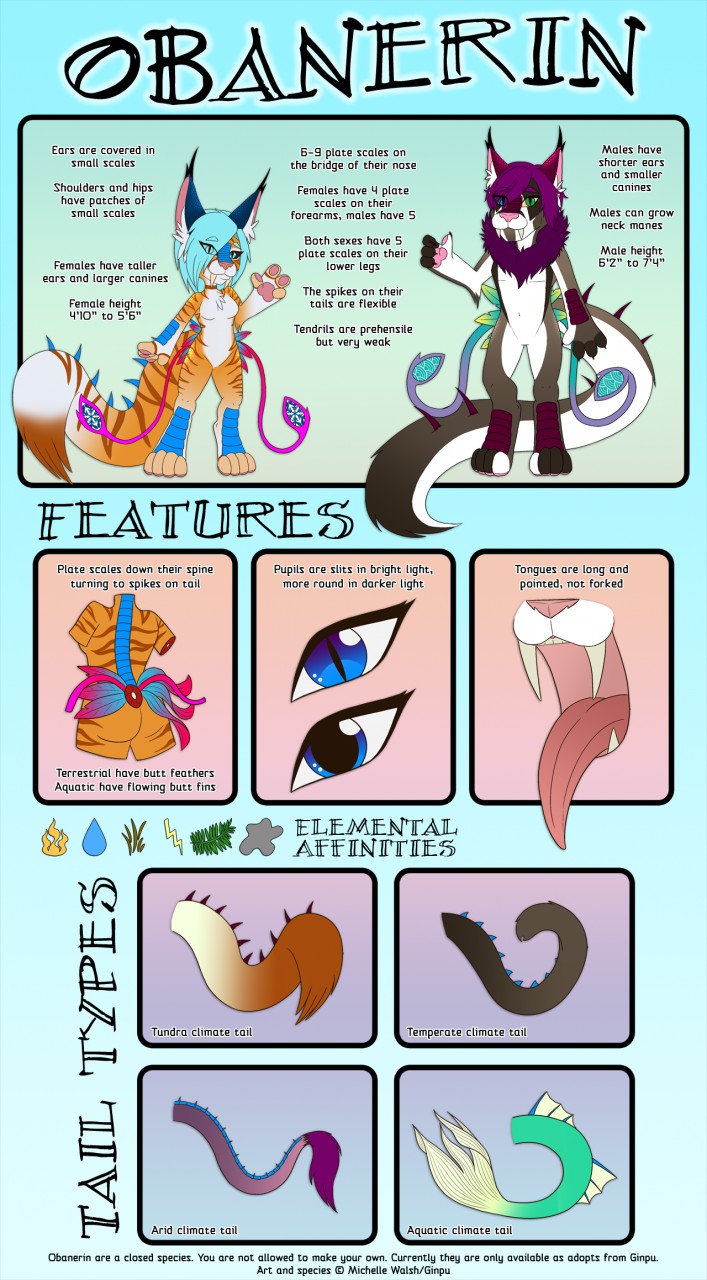 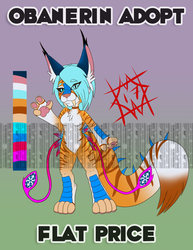 These are an original closed species I have created. You are not allowed to make your own. They can be obtained by adopting them.

Obanerin are feline-like humanoid creatures. They are digitigrade bipedal creatures covered in a light to dense, but short, fur depending on the climate they live in. In some areas of the body small scales are present. These areas are always on the ears, shoulders and hips. On their forearms, males have 5 while females have 4 large plate scales. Both sexes have 5 large plate scales on their shins. On the bridges on their noses they have 6-9 plate scales. They have 4 digits on their hands and feet. Their hands have opposable thumbs. Almost all of them have long tails, though occasionally one's tail may be short either from birth or battle. At the base of their tails there are small, fine feathers, followed by 6 large feathers and 2 longer prehensile tendrils. These tendrils can move around and grip items, but they are very weak. The tendrils are used to convey emotions, from looking for a mate to scaring away a would be attacker. All Obanerins have large plate scales running down their back; when the scales reach the tails they become spikes; depending on the climate, depends on how large the spikes become. They have paw pads on their hands and feet. Their hands and feet are larger in size while their digits are short. Their ears have tufts of fur on them.

There are sexual dimorphisms. Females are generally 4'10" to 5'6" while males are typically 6'2" to 7'4". Females have larger ears and canines than males. Males have the ability to grow a mane around their necks, but it is a personal choice on if they grow it.

Climate affects their tails. In colder climates they grow big fluffy tails that help them to keep warm. In temperate areas they have medium length furred tails. And in the more arid or tropical areas they have very short fur on their tails; ending in longer hair that can be used to fan oneself in the heat or to help shade them.

There is a subspecies of aquatic Obanerins. The fur on these is usually dense and water resistant. In places of tail feathers they have flowing fins and their tendrils are bio-luminescent at the ends. Their tails are strong yet possess delicate flowing fins. They swim similar to otters. They are still air breathers as they do not have gills and can exist comfortably on land.

While many do not bother with full clothing, lighter clothing is commonly worn.

The Obanerin world is one of magic and technology. Obanerin are free to choose any profession they desire, though few decide to become warriors as there are few confrontations between tribes. They may live in small villages or larger towns. There are no huge cities as all Obanerin revere nature and try their best to only use what they need from the world.

Each Obanerin has an affinity to some element which can help them in deciding their future life (but it only helps them, not decides for them); it is usually wise to make use of one's natural gifts. The main elements are Earth, Water, and Fire. Breeding can produce different elements.