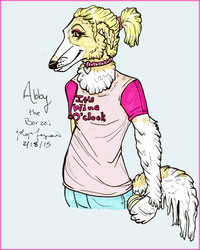 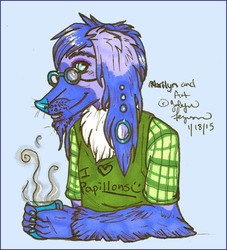 Doodled this a little while ago and never finished it cause I didn't really like it. But just sucked it up and threw some color on it the other night, when I was kinda half asleep and had had a few glasses of wine and fucked up some of his markings. I also attempted to draw his sleeve that I recently decided to add to his design but as you can see, that didn't really work out. Shouldn't have drawn the string around his arm, but yknow it's habit, Mitri's gotta have easy access if he feels like shooting up :P That, and this pic is just too small for that for the first time I've ever drawn it.

But I am doing a separate image that is much better than this to show off the sleeve tattoo I came up with for him. I kinda like it, never really done a big tattoo for a character before. Bout time, Dimitri is fucking metal. The "skull" you see there is one of Pantera's logos I'm fixing up on the other picture and is part of his sleeve. I chose this logo out of the others cause I thought it suited best.

And Mitri's a huge druggie, whore and dirtbag. But he's really pretty, and has a sexy Russian accent. Yep there you have it, hi Dimitri you dickwad. :)