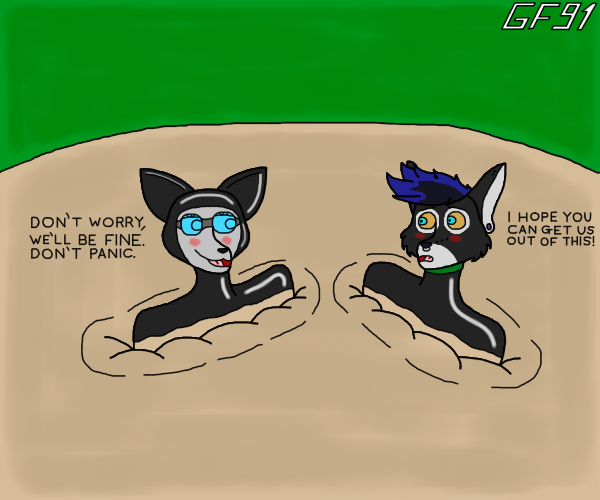 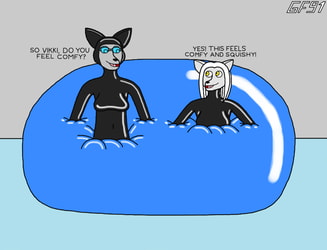 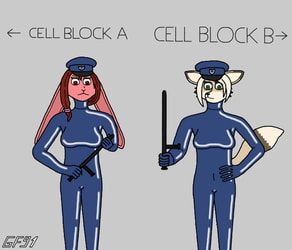 Here's something that I wanted to do for CanisPetros. It's his character Fin sinking into the quicksand with Ghost in latex. I want to do something different instead of doing the same two characters. So I hope to do some more WAM and swimsuit stuff, but there still will be some latex and rubber stuff. There needs to be some more latex in quicksand.

Fin decided to take a sink in quicksand in latex. And he decided to have some company. So he brought quicksand-expert Ghostfox, who is also in latex. They start sinking into the quicksand and Fin began to panic. "Uhh, Ghostfox, I think I made a mistake." Ghost is not concerned at the quicksand. "What's the matter? I thought you wanted to have some fun." They sank up to their bellies, and then up to their shoulders and Fin wanted to escape. "I hope you can get us out of this!" Ghost, not concerned, knows that they're both afloat until they struggle. "Don't worry, we'll be fine. Don't panic." They were both blushing at the feeling of the quicksand on their rubber bodies. "How can we get out?" Ghost says, "Gentle movements. Don't struggle too much." Fin moves slowly to get out of the quicksand and escapes. "Wow, thank you."
"No problem."
"Aren't you coming out?"
"I will, but I'm just having some fun."
"Uhhh... Okay." Fin decides to leave the area.

Technical:
This was my first time drawing what I would like to assume is a hybrid species. Since Fin is a Karelian Bear Dog. And I had to use his reference to draw him. It was tough at first, but it wasn't too bad. But the thing was, I couldn't figure out how to do gradients in Krita, because while you can do gradients in Krita, I couldn't do it so I had to improvise to color in Fin's hair. And I also tried to something with perspective in this, but it didn't work out like I wanted to. But I did okay on this one. And I hope you like it Fin.

I want to ask everyone a question. Should I take things up a notch with my art? Should I take the risk and do some mature and maybe even a very low chance of it, adult artwork? Or am I going to lose watchers if I do both? I have been thinking about this for a long time now. I want to do something interesting with my art. If I do draw mature and maybe some adult artwork, I might as well lose watchers. But I would like to take it up a notch with my art.