A pouty N7 aftermath by Ghostbear 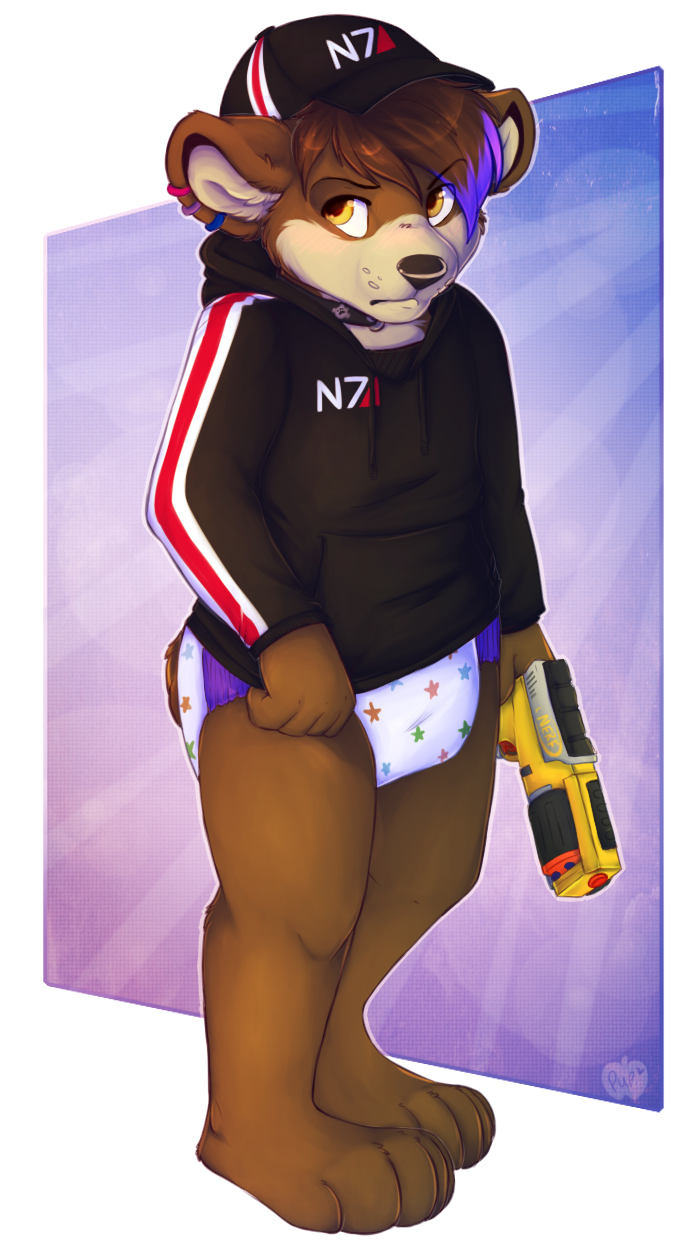 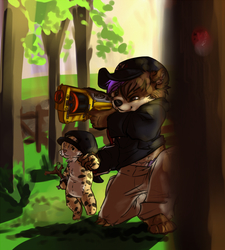 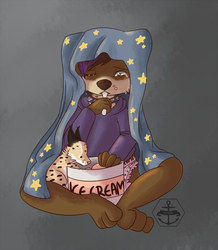 "Now Sammy, we'll get them!"
The little bear, dressed into a comfy hoodie, basecap and sturdy cargo pants jumped into cover, rolled behind a tree and squeezed off a couple of shots, totally immersed in his play. His hoodie and cap both had the signature elite N7 Commando logo printed on them, a signature from his favorite computer game series Mass Effect. And because of his wild play, the jumps, the wobbly rolls and clumsy charges, a large tear showed at the knee of his cargo pants and green and brown grass- and mud stains were all over it. "The Banshee is down, now we just mop up the rest. Don't let up, we got … "
Suddenly Sascha's field of view was filled with a totally different "treat". One he couldn't shoot with NERF guns from his toy pistol, pretending to be a Talon heavy pistol. That was real and immediatly send some small pangs of guilt through the lil ursine and his ears folded down down a bit.
Of course he had heared his step mother, calling for him to come in again, as it was already getting late and dinner was on the table. Yet he had ignored it, continued to play and now he had to face the music.
"Inside, young man. Right now!" She wasn't yelling but the folded arm and lightly annoyed tapping of her foot told Sascha not to argue and just follow her back into the house.
They just made it back into the hallway, before she signaled him to stop.
"And not only that you totally ignored and disobeyed me, just look at you. You pants are a mess and that large tear … those were new. Got them off, let me see..."
"But mooooooom, I just played and I'm not hungry and Sammy and Iwannakeepplayin...."
"Now.."
"Moooooom..." Despite his whining he quickly stepped out of his pants and handed them to her. Then he stood in front of her, still clasping his little toy gun, unsuccessfully trying to tug his N7 hoodie over his now exposed pull-up, with an adorable pouty look on his face. "...I'm sowwy."
His step mother tried her best to keep a straight face, trying to give her charge a stern look. Of course she was a little annoyed with him at first for ignoring her orders, but seeing him now like that… it was very hard to stay mad with him. That little rascal always knew how to charm his way out of trouble.
With a deep sigh she inspected the damage to his pants, jugded it as repairable and gave her little son a far more playful than serious swat on his padded backside that produce nothing more than a little ploffing noise.
"Now off with you, wash your hands. Then come back and sit down for dinner."

And incredibly cute and adorable follow-up picture to my last submission. A little pouty, fussy cub who had to interrupt his play pretend for something as unimportant as dinner. ^.^'' Poor guy.
Done by the friendly and very talented