On the run by Ghostbear 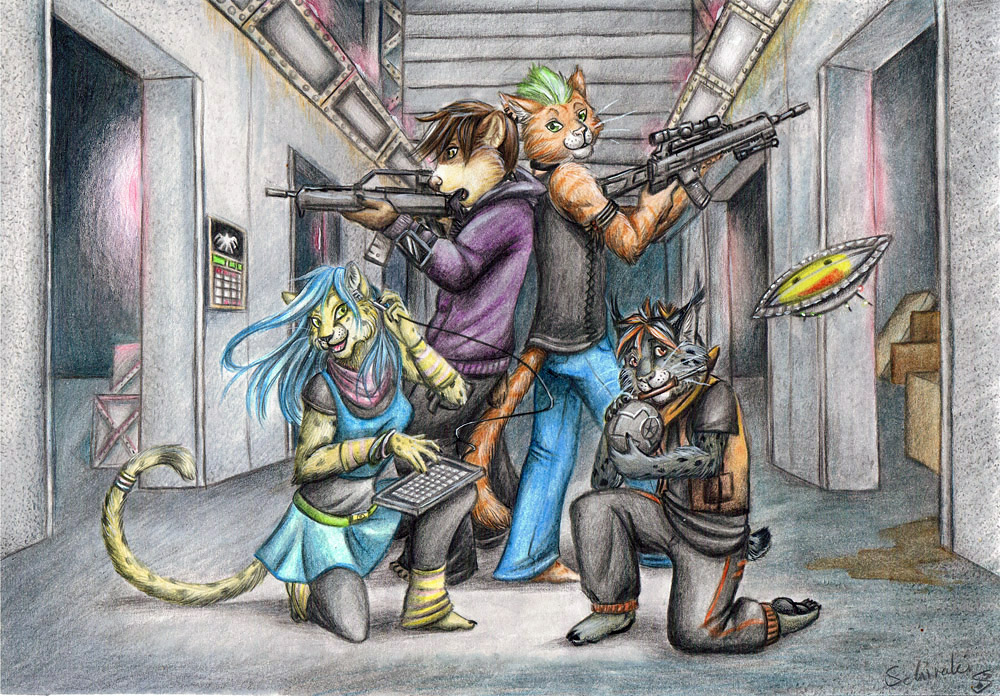 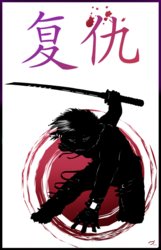 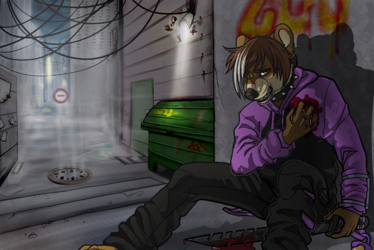 Alarm klaxons were blaring through the facility, alongside with red flashing lights .. indicating that the freelancer group had finally been noticed. The leader of the Spectres, a kinda short and young looking bear hybrid frowned at the lights. Great...
But on the other hand, it has only been a matter of time until somebody would pick them up and sound the alarm. Ghostbear had not expected to get in and out so easily, this was his old employer and he himself had personally trained a lot of the security personal.
Still, the main objective had been completed. Additionally to the data extracted from the mainframe Cayman had sabotaged system, wiping clean the core and earasing years of research data. Another bonus blow to the BioResearch company.
But first things first, all that really mattered now was getting out alive. Sascha, that was the real name of the bear, punched in some numbers on a nearby panel. Nothing, zero. That was to be expected, not to worry.
He exhaled once to calm down his pulse, fighting down the urge to activate his reflex boosters. Not yet at least.
"All right, we need to get out. All security doors are looked and our access codes are not working anymore" His voice was calm and cold as his SpecialOps training took over again. "Cayman, get into the system. See if you can override their security systems and get the security doors open... And shut off that alarm. Can you do that?"
With a cheeky grin the netrunner, a cheetah girl named Kaylee, reached for the fibreoptics cable and inserted it firmly into the connection jack implanted in her temple.
"Is the grass green? Or did Ryan wet the bed again? Of course I can do it. Just give me a few minutes... "
"Did not!" grumbled the young lynx boy, while he was fumbling with one his combat drones to get up in the air as well. His other drone, resembling a flying trashcan lid with a kidlike drawing of a smiley painted onto the top, was already circling around the group.
"Shut it you two. Concentrate on the job." Sascha cut in before the more or less friendly bickering between his two techies would distract them too much. "Drifter, what about the second drone? I need the surveillance data and I need it now. Or we are pretty much sitting ducks here."
"Fe targeting madrigs iff still off and I need thome time to... " The lynxes' words were almost unintelligible as he tried to speak with a screwdriver clenched between his teeth. "fose stubborn dronfes …" Annoyed he gave the ball-shaped drone a couple of hard slaps with his flat paw. Instantly the drone wirred into the air with a sharp wine. He spat out the screwdriver. "Drones are ready, Ghostbear. Ready to engage."
"Copy that, Drifter. Covers us with your combat drone and try to get some data on the security personal closing in with the second one."
As Sascha was raising his modified assault rifle he felt the warm touch of fur at his back. Daniel, his second-in-the-command and the Spectres' marksman was leaning into him, giving him a friendly nudge and a warm smile. "Ready to engage, Colonel". He had a habit of using Sascha's old rank to tease the bear. Aside from his easygoing nature, friendly teasing and fierce loyalty he was one of the best gunmen out there. His skills with a precision rifle could even outmatch the already excellent skills of Sascha. And that without being augmented with an implanted targeting system like his team leader.
Ghost enjoyed the warmth for a moment, shivering slightly under the touch of his best friend. He knew the red tabby feline had feelings for him and it was not that those feelings were not mutual, but it was nothing he could deal with right now. Or ever. He tensed up again and his voice was far more frosty than necessary "Roger, Cobalt. Fire at will. They will be here soon … "

schiraki. Thank you so very much!
Every time I commission her I kinda get her into trouble with my picture ideas (she doesn't really like to draw weapons and lots of architecture) ... but every single time the result is just great and fits the idea perfectly. Please give your lots of love for this cool picture! ^_^