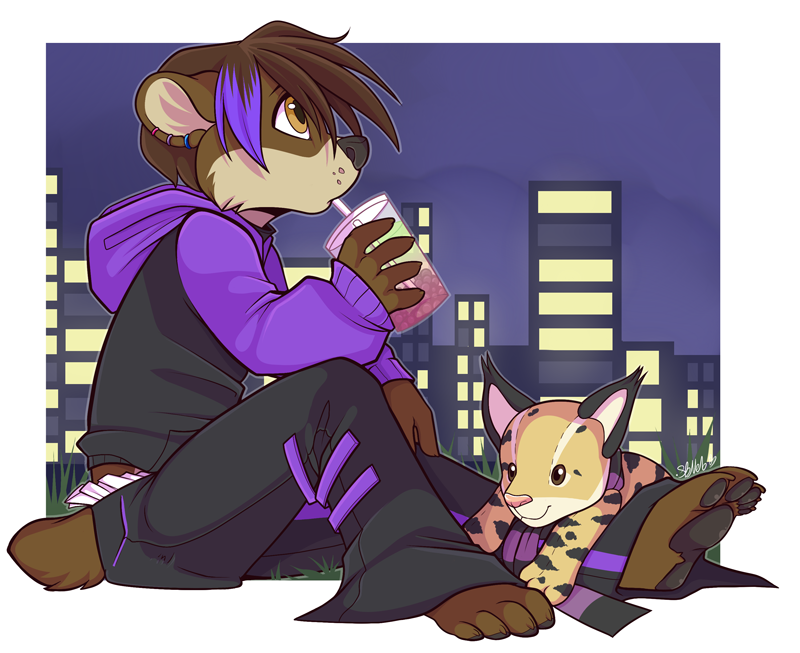 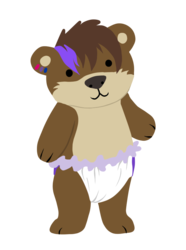 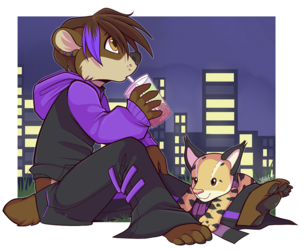 It was already dark when Ghosty sliped out of his step-parents home. With them being on a sudden business trip the teenage bear hybrid had a lot of freedoms. Aside from a few habbits that were not quite his age he behaved most the time and had already proven that he was dependable and could stay alone for a couple of days without a problem … so they trusted him not to do anything too stupid. Besides, he was well liked in the neighborhood so people tend to look after him a little and the part of the city he lived in was very safe, even at night.
Tucking Sammy, his beloved lynx plushie, safely under his arm he made his way to his favorite spot. A small hill at the edge of the city, only a few hundred meters away from his home. A quiet spot perfectly suited for hanging out, musing about things and watching the stars. Despite his young age, being only a teenager, he was a very pensive guy.
On his way he passed one of his favorite stores, an asian style snack bar where stopped regularly for some noodles or other food. No MSG, 100% natural and great taste.
Just recently they started to sell bubble tea as well, with the same advertising, creating a far more tasty bubble tea than other shops in the city. The shop owner, a giant panda looked up smiling when he opened the door.
"Hey lil one. You're up late again, aren't you?"
"I'm not little, Lee." Ghosty pouted a bit, looking incredibly cute in the process. "Just … dun tell my parents, okay?"
With a grin at the bear's slightly padded looking rear the panda nodded "Yeah, sorry .. you're not little at all. And I promise. Don't want to lose my best customer. So, what can I get you? Noodles? Or fried rice tonight?"
"Mhh, fried rice and veggies. But just a small box, I'm not really hungry. And one of your bubble teas. Green tea, Kiwi flavor and Tapioka pearls."
It didn't take long for Lee to get everything ready and soon the bear waved his goodbye and left the shop. Despite his earlier statement he was digging through the food quickly and finished it before he reached his spot.
Flopping down with a quiet crinkle and draping Sammy over his leg Sascha stared into the night sky and at the stars, sucking up sweet tea and chewy pearls.
"One day, Sammy … " he told his lynx plushie ".. I want to go up there and see them all."

Another commission I got from the highly talented

sbneko. I had been quite lucky to grab a slot at her last round and the result just blew me away.
Very cute, a bit pensive ... and oh yeah, she drew an adorable version of my lynxy Sammy. Thank you so very much, I absolutly love the picture! :3
And I think I love this age of my char best. Neither fully grown up nor a baby. And I think she captured that age perfectly.

And that snack bar really exists, the food and bubble tea there is really good. Although the owner's name is not Lee (and not a giant panda of course)