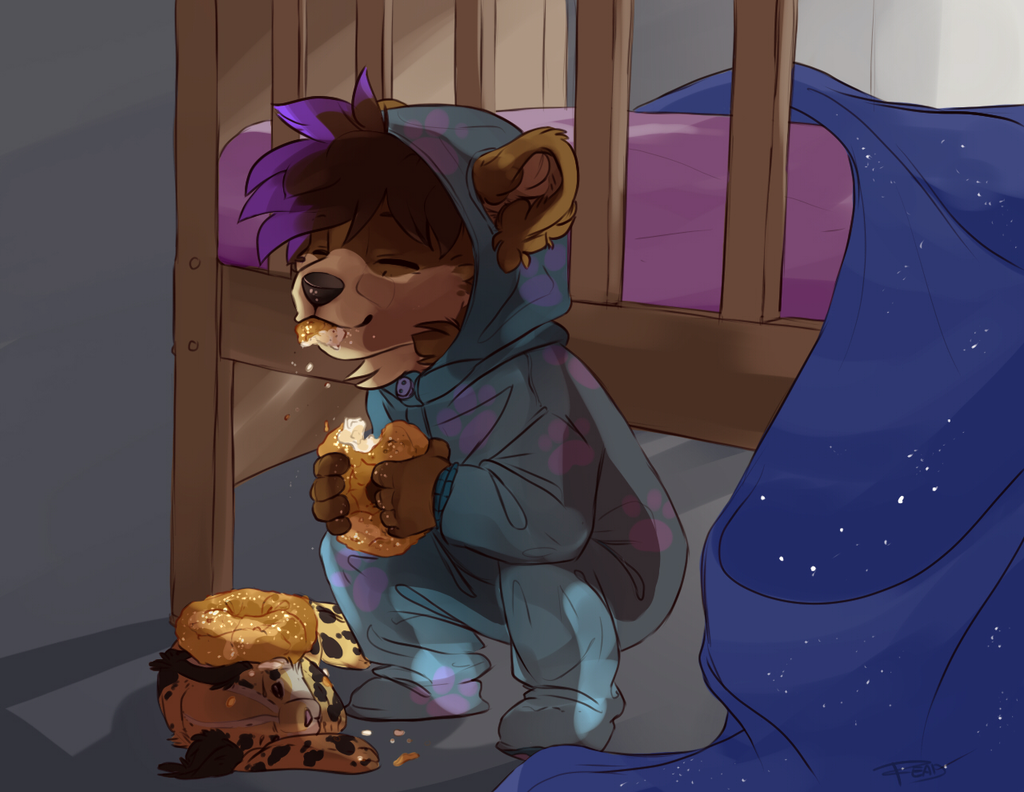 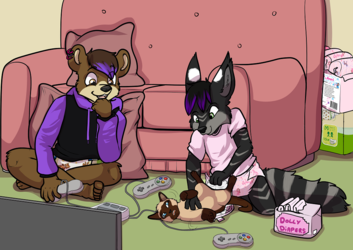 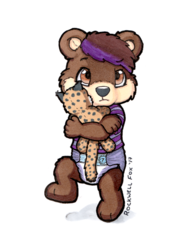 "Oh come on, Sammy... help me a little. And I'll get you one, too."
Drowsily climbing out of he bed at midnight in his cute footed jammies wasn't an easy task, especially because Sascha refused to let go of his best plushie companion, but somehow the little bear-lynx hybrid woke up hungry.
Pawing for the sippy cup revealed that he forgot the tea in the kitchen, but he was craving for some more substantial food anyways.
Namely the bag of donuts his mum brought home from shopping today, full of those sweet, sugary, fatty rings joy. Plus he only got one after dinner... and Sammy even got none.
Time for the little cub to take matters into his own paws.
"Let's go, Sammy... cover me!" he whispered, before stuffing the long-tailed lynx plushie into his front pockets of his jammies, before pulling up the hoodie and threading his little ears through the holes.
He was an Assassin and his mission was clear!
Stealthy Sascha made his way to the kitchen, tiptoeing past his step parents bedroom. Or ... more like crinkle-waddling, both because of the thick, warm fabric of his footed PJs and the equally thick night time diaper beneath it.
But luck was on his side and he reached the kitchen unnoticed.
"We did it!" he told the lynx plushie before rummaging through the cupboard until he found what he was looking for. Taking two donuts out of the bag and putting the bag back into the cupboard, his mouth started watering... and he being distracted he almost blew the operation.
Clumsily he managed to tip over an empty glass jar that would shatter loudly on the tiled floor.
Pawing frantically at the glass, he was saved in the last possible second by his companion Sammy. Luckily the jar tipped directly onto Sammy's nose, giving Sascha enough time to snatch it and put it back where it belongs.
"Awesome job, Sammy! Thank you" the little bearkitty beamed at his fluffy friend.
Taking the same crinkle-stealthy approach than on his way into the kitchen, he arrived unnoticed at his bedroom. He closed the door, flicked on the tiny lamp on his nightstand, before placing Sammy on the floor and giving him his part of the loot.
Somehow however the whole heist seemed to have made the lynx plushie sleepy... so Sammy was already snoring peacefully on the floor.
"Awww, sleep well, buddy. I'll just leave your donut here, you can eat it later, okay?"
Crouching near the bed, Sascha took out a big mouthful of the sweet treat, raining crumbs and sugar everywhere.
"MHHHHHHHHHH!" ^__^

A ultra sweet (hehe) commission I got from the awesome and super-friendly read
I only set the clothing this time as I was looking for some jammies (and the little story afterwards, after the picture was done) ... but the whole adorable scene was created by Read!
Yay :3 It's so cute and I surely can see my little bearkitty doing exactly that...going for a little heist.
He'll probably be in a bit of trouble in the morning, because of the missing donuts, crumbs all over the floor and Sammy has probably not finished his yet.
But you can stay mad at this adorable little thief for long?
Thank you so very much! It's awesome... the scene, the lighting, the fluffyness and the pure innocent joy.
Thankies!