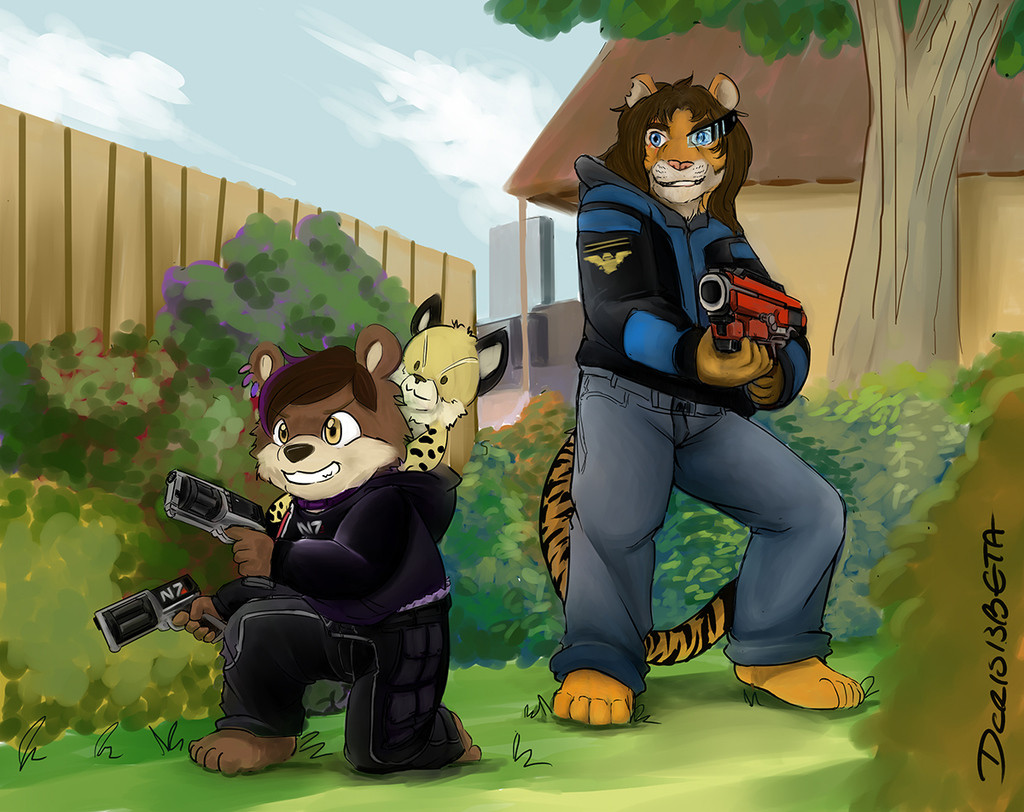 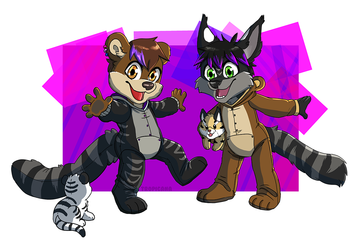 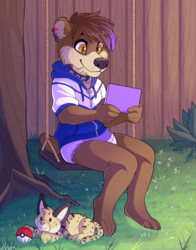 Night wasn't exactly happy when he heard that he had to look after a little cub. Mostly because he had, in his eyes, better things to do than playing childish games.
Better things like hanging out in front of his computer, playing games for instance. Or whatever a fun loving young, but already grown-up tiger had planned.
And when his charge Sascha arrived that seemed pretty justified, as he wasn't just a young boy .. but already still crinkling around.
With a sigh he tried to make the best of it and agreed to one of Sascha's games that even turned out to be not as childish and boring as he thought it would be.

It took the pair a while to find the custom painted NERF weapons, that were modified to look like Mass Effect guns and their matching clothes.
But soon after that they were playing around in the the garden... with Sascha, dressed like his hero Commander Shepard (and of course with his favorite plushie Sammy staying close to him) and Night, wearing a hoodie that was nade to look like Garrus Vakarian's heavy turian armor.
Their mission lead them against imaginary (but deadly ;) ) Geth and, without even realizing at first, the young tiger had a lot of fun playing pretend and he enjoyed every minute of babysitting.
Who would thought that a young cub like Sascha already had an interest in a game like Mass Effect.
Well, Sascha's step dad was probably to blame for that ^.^'

There is a fun little story behind that picture. ^.^
Last year I met  dreamandnightmare for the first time in person. We already talked a lot online and already became friends, but last year's Eurofurence was actually the first time we saw each other in real life. Night is really an awesome guy and every bit as nice as I imagined ^_^
And last year he had a big surprise gift for me. My grown-up fursona, drawn by him as Commander Shepard from Mass Effect... in painstaking detail, recreating the Mass Effect 3 cover without tracing it. You can believe me that picture was just totally awesome and it blew me away.
This year I wanted to give Night a little gift of my own.
And as I'm not an artist and can't draw, I asked my friend Fernando ( dcrisisbeta ) if he would accept this commission ... drawing Night's fursona as a young adult and my little bearkitty in a Mass Effect - babysitting picture.
I really loved the result ... it's a heartwarming, innocent and funny picture and I was so looking forward to gift this picture to Night.

And his reaction was everything I had hoped for. :)
He looked so happy and instantly went "Awww" ... so I was just as happy that he liked it.
Have admit, I was a bit anxious and unsure, because it is a Babyfur (well Littlefur) picture and Night really hasn't any connection to this part of our little fandom.
But he like it and... yeah... ^__^

Thank you for being an awesome friend, Night.
We might not see each other often, but when we do, I really enjoy the time together.
hugs