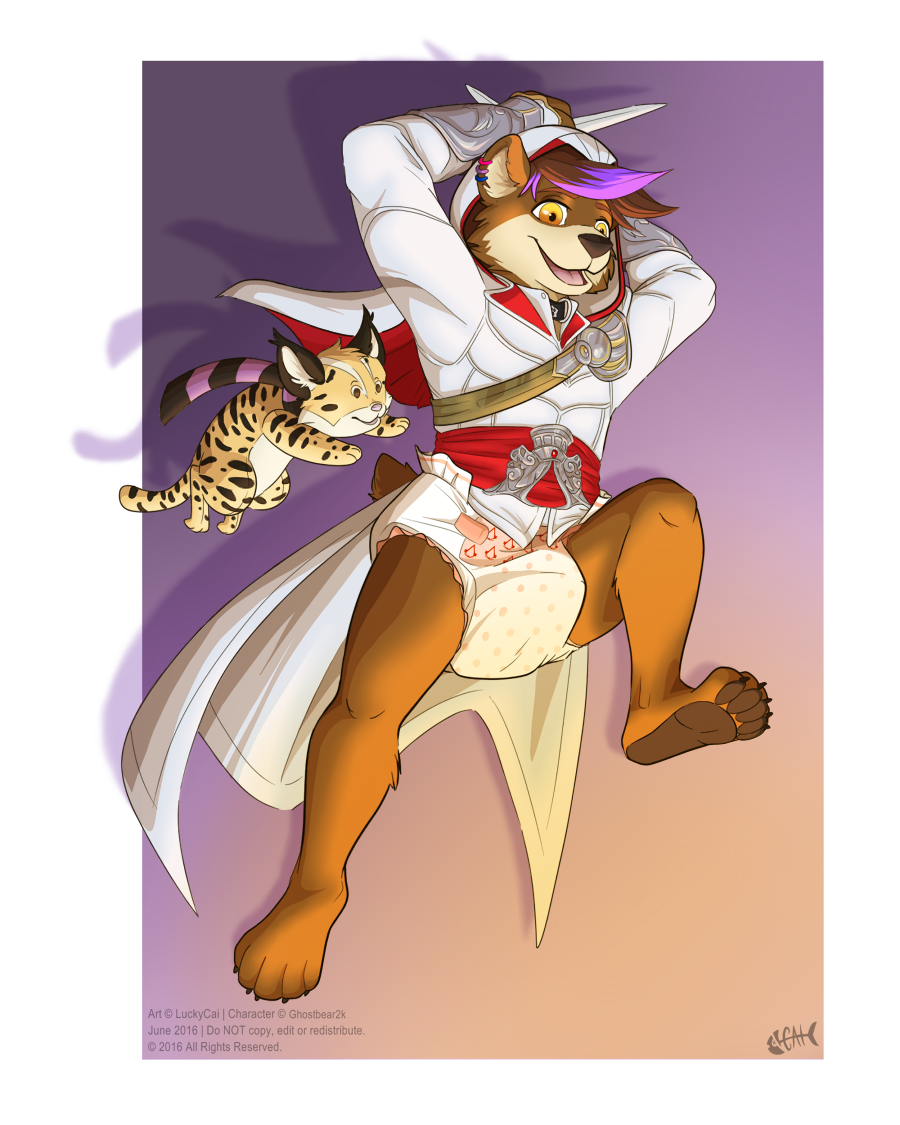 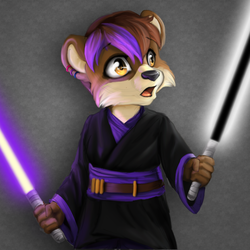 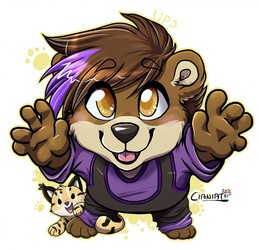 With the ongoing early summer being a mess of rain and thunderstorms, Sascha had to stay a lot of time indoors.
Sure he had his share of playing in the rain and mud and it was fun. But sometime the rain was so hard, even he was confined to the house.
Not that this would stop a playful cub like him from having fun, oh no sir.
Especially when you got a step dad who is one pretty big computer game nerd... who loves to share this hobby with they kids. His wife wasn't always to happy about it, because most of the games he played with Sascha and his adoptive brother Kuraiko were definitely not made for their age. Games like Mass Effect, Assassin's and stuff like that. But the boys always handled the games very well .. no nightmares or anything.

On one of these particularly rainy days and with his little brother being away to visit a friend, Sascha flopped in front of the computer to play... but he got bored with it very quickly.
Putting down the controller again he waddled into his room again. Rummaging through his closet he found what he was looking for.
He stripped down to nothing than the thick diaper he was wearing on this lazy Sunday, instead of his usual daytime pull-ups, then carefully dressed into the cool cosplay costume in front of him. The white dressed, trimmed with red accents and "Metal" bracers belonged to Sascha's favorite Assassin's Creed her, Ezio Auditore.
It took him quite a while to get everything right, because he slipped up on doing the sash right and getting the plastic "hidden blades" properly attached. Some of the words he muttered would have probably a bit of timeout and he swore he could hear Sammy giggling.
But finally he got everything right. Well, everything except the pants, but he could not get them fit over his padding. Oh well, who needs pants anyway?

Instantly little bear hybrid got into the head space, his fantasy allowed him to switch into the world of Ezio instantly. But unlike the Italian hero, Sascha had a trusted companion to help him.
"Come on Sammy" he whispered. "I see our targets, stay low and back me up. And when I give the signal.. strike".
Carefully Sascha made his way across the house, using every available cover .. although the audible crinkle made his stealthy approach a little more difficult.
Finally they made their way into the living room and the partners were very close to their prey. In an last effort, Sascha and Sammy climbed their way all up on the sofa.
"Now Sammy!"
With the (very bad ^.^') imitation of an eagle's cry the little ursine extended his his hidden blades .. then leaped down on their unsuspecting Templar targets, with Sammy following closely.
Air assassinations were always a thing of beauty.

Or .. would have been, if not performed by a slightly clumsy, diaper-clad, 7 year old Wannabe-Assassin with plastic hidden blades. ;)

A wonderfully executed (haha ^.^) picture of my little bear hybrid, all dressed up as a Wannabe Ezio Auditore. Ezio was always my favorite protagonist in the Assassin's creed series, because he is funn,y charismatic and has a very deep and tragic background story.
When  <fa:luckycai< opened up a slot a few days ago .. I spontanously had to get this picture drawn.
Man, I wish I could trade place with this cute little guy. :3
Thank very much, Cai ... you did a wonderful job on this picture. Especially with all those little details on Sascha's armor. Amazing.
Thankies!