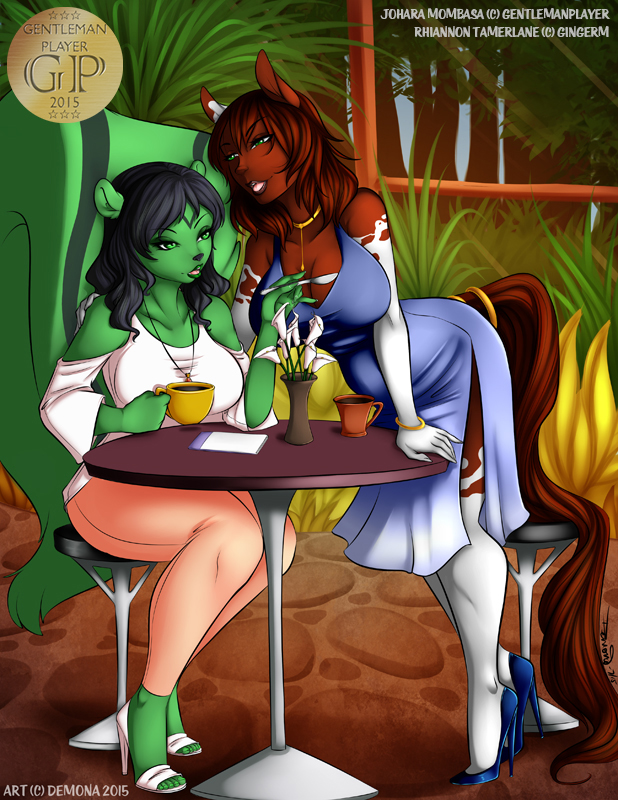 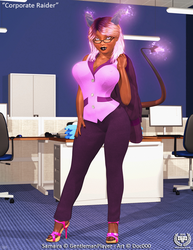 The preliminaries had been the easy part, of course - introduction, small talk about the weather, their employers, where they were from. But that had been only the introduction, though necessary. It had broken the ice between the horse-girl and the skunk-girl, gave them each a chance to get a feel for the other. Then had come the real conversation, and it had gone fairly easily, all things considered. Now the horse-girl smiled over the rim of hir coffee cup to hir companion. "You'll think it silly of me, Johara, but... well, I was quite nervous about coming to meet you," shi admitted with a chuckle.

One elegant, dark-green eyebrow rose in wordless reply as the skunk-girl sipped at her coffee. Her cheeks dimpled with a smile to the Appaloosa-patterned woman, then she observed, " 'Nervous' isn't the word that came to mind when you arrive, Rhiannon," she replied.

The meeting had been Johara's idea; she'd heard about the stallioness from the red-furred tiger she loved right down to her toes. He'd been careful, in a way that put her in mind of a cat on hot stones, the first time he'd mentioned the horse-girl in a FedEx uniform at The Company's Christmas party. She wasn't worried, but she was very curious. It had taken some patience on her part but she'd gotten the details out of him. Rhiannon sounded, on balance, like a fun person; and if Kyrell had taken a liking to her, in Johara's opinion that spoke well of the horsewoman.

If anything, though, she'd expected a very casual type of person to meet her, going by Kyrell's description of her nature. She'd been pleasantly surprised at the sight of the tall, cool beauty who'd arrived at the restaurant. There was no mistaking her; Johara would've bet there wasn't another Appaloosa horse-girl in three counties. But the long, simple summer dress in royal blue that faded to sky at the hem was hip and sophisticated, and the emerald skunk-girl mentally checked another box in Rhiannon's favour.

"Oh, but I was," Rhiannon replied earnestly. "I didn't know about you and him at first, but when I did -" shi cast hir mind back to the first occasion when shi'd visited his office. Being The Company's IT guru, Kyrell's office was largely what shi'd expected - fat manuals and binders on shelves, cases of CDs and DVDs, a motley assortment of USB drives on his desk, and of course a serious workstation. But pride of place was given to a simple, silver frame from which a green-furred beauty with a heart-shaped face smiled out. It was the smile that had caught hir attention; the tilt of the skunk's head, the slight curve of of her lips, the laughter dancing in her eyes. It was the special, secret, loving smile a woman reserved for her heart-mate.

After that, though shi'd laughed and joked with Kyrell one day to the next, shi'd left the next step in the dance to him. When he'd joined her in the sauna one afternoon shortly thereafter, shi felt shi knew the basic limits of what they had. Oh, it had grown - the first time had been a party fling, with no thought or commitment to the future; just the scratching of a lustful itch. But after that - in the sauna more than once, in the mail room including when they'd pretty much trashed it, and in his office when he'd stayed late - that had been a transition of their own, from fuck buddies to friends with benefits, and Rhiannon was more than content with that.

The invitation from Johara, to meet for coffee - with all that implied - had changed things, though. They would talk of course, and get to know each other somewhat. But the unspoken conversation would be the important one, and so Rhiannon had ventured to meet Johara with a certain amount of apprehension.

"Kyrell," shi went on, setting hir cup down, "... he's hard to read, sometimes? And I didn't want to pry. So... all I really knew about you was what you looked like." Pause. "I'm glad I didn't chicken out, though," shi went on, hir leaf-green eyes sparkling. "Thank you for inviting me."

Johara tilted her head to one side a bit. "For my part, I knew about you... with a bit of prodding, I might add. Kyrell can be very private when he wants to be; it comes of being a big cat, I think. And being a guy. They so often make a big thing of how they're free and easy, but they can be so uptight sometimes," she laughed softly. "But once he got over that, he told me some of it... but he never brought home a photo. Fortunately, Appaloosas are distinctive... and he did mention you love blue." She fell silent for a moment, toying with her spoon.

"I think..." Johara resumed after a few moments, "... we ought to do something..." The skunk-girl gazed off into the distance, thinking, the spoon forgotten in her fingers. Rhia stood, leaning toward her and rested a hand on her shoulder.

There is no need to adjust your computer settings. You are looking at an image in The Company series that is G-rated.

I wanted Johara and Rhiannon to finally meet each other. And I wanted it to be in a non-sexual situation. However, they may end up doing something naughty in the future.

Johara Mombasa is the intellectual property of

Rhiannon Tamerlane and the writtern story are the intellectual property of

GingerM, and may not be used in any way, shape, or form without her expressed written consent.

The above picture is the combined intellectual property of myself, GingerM and

Demona, however, Demona retains original copyrights. It may not be modified or redistributed without their expressed written consent.

GingerM is the only other person that has permission to post this picture, aside from myself and the artist.
Her submission: https://www.furaffinity.net/view/17191621