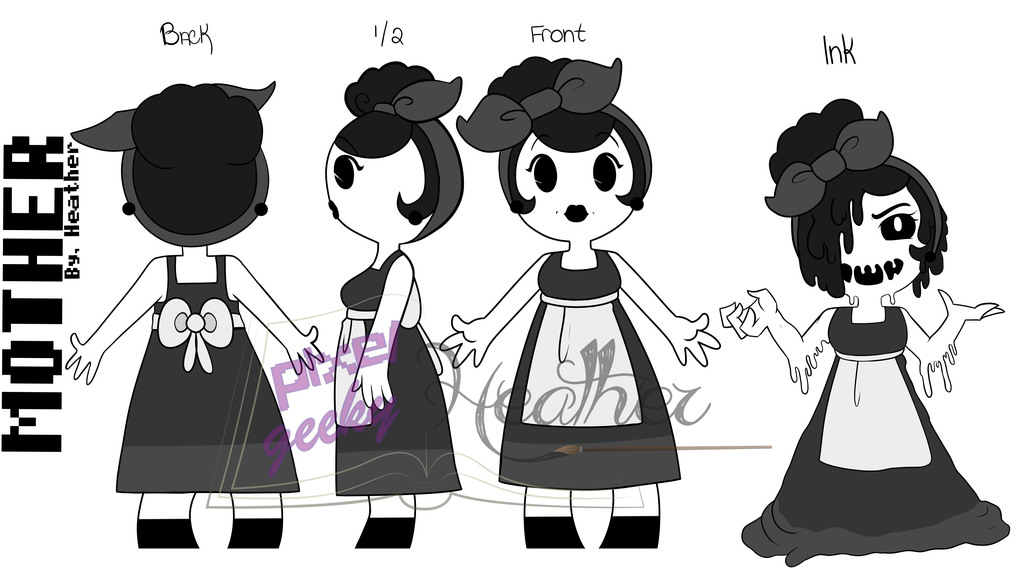 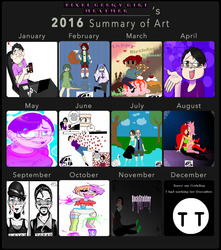 OMG I POSTED SOMETHING XD

So I would love you all to meet "Mother" Bendy Mother
Now I have always pictured Bendy as a Little Devil child and i was wondering what if he had a mother but she was never introduced into the series of this old cartoon.
Well I did one XD
As you can see I tried to do a 40/50 stay at home mom look for her I looked up tons of outfits for her and hairstyles OMG the hair! BUT i did have so much fun with designing her she was just so much fun.

you have been warned...Thank you

So this is an idea for the new game called Bendy and the Ink Machine, how this story starts off is in the newest chapter of the game chapter 2.

The story will be as accurate to the game as I can make with two of my fan characters in it that ACTUAL work.So the story takes place in chapter 2 where you see Sammy Lawrence ties up Henry as he says that he was going to use him as a sacrifice to his inky lord Bendy. Sammy leaves as he enters his little office as he starts to chant “Sheep, sheep, sheep it's time for sleep. Rest your head, it's time for bed. In the morning you may wake. Or in the morning you’ll be dead. Hear me Bendy! Arise from the darkness! Arise and claim my offering! Free me! I beg you! I summon you, ink demon! Show your face and take this tender sheep!”

As Sammy was about to finish he sees a black ink blob form in front of him as it was Bendy’s protective “mother.” “Mother” looks down at him and speaks in a demonic voice, “You are using my son for your own evil,” She grabs him by the neck and lifts him up as all you could here was screams of pain from within the office as “mother” ripped him appear.

Now here is the question who created “mother” this is my other fan character and her name is Crystal. She worked with the Henry, Sammy, and Joey on the project of Bendy but she was also working on a secret character for the show joey but before she could show him the studio closed down.

Now this is where her story begins as she got the same letter as Henry did that reads “Dear Crystal, its seems like a lifetime since we worked on cartoons together. 30 years really slips away, doesn’t it? If you’re back in town, come visit the old workshop,there’s something i need to show you. Your pal Joey Drew. Maybe he was going to reopen the studio as she wanted to show him “mother” for his character bendy, she grabbed her sketchbook with the pictures as she went to the old studio as she enters and looks around but does not see joey anywhere, she walks around and comes across an open room as she backs up in terror as she sees a life size boris the wolf guts up as did not understand what was going on and how this was real as she turns and runs to the exit but sees it was locked from the outside as she backs up from the door as she bites her lip as she turns and sees something or someone walk passed her as she yells out to them but they did not respond back as she rushes after them and found she was at her old office door as she blinks and remembers there was a window in it. She enters and sees the window as she walks to it but them feels the floor give as she screams and falls through the floor and hits the ground hard as it knocks the wind out of her.

When she comes too she was in the music department where Sammy use to work as this is where chapter 2 beings in the game. She slowly gets up as she rubs her back and head as she looks around and blinks seeing a dark figure drawing pentagrams on the walls and floors with ink. The man leaves as she hears him chanting something as he leaves as she begins to look around the department. She comes across a hour last Henry as he got hit in the back of the head by this man she say in the beginning as she backs up seeing Henry get dragged off as she thinks of how she can help as she remembers that odd chanting that Sammy was doing as she quickly goes to one of the pentagrams and knees down as she starts to chant but instead of saying bendy she said “mother” as the light flickers as she sees ink start to gather around the pentagram and it takes to take form as Crystal’s eyes widen as she sees the form turn into “mother.”

“Mother” looks down at Crystal with her dark black eyes as she speaks for the first time as it was a very dark demonic voice as it says” my son is in danger.” And with that she vanishes in ink. Crystal was in shock for a few as she hears screams from Sammy as she snaps back to reality as she rushes to Henry as all they heard was horrific screams from where Sammy went to. As crystal and Henry hurry off as Henry grabs the ax, as crystal’s eyes widen seeing these ink searchers as they come from the ink on the follow as her eyes widen as she sees Henry swing the ax and hit them making them turn into ink again as they run off into the next hall way Crystal behind him as she turns her head not seeing anything or anyone following them.

She turns her head as she looks at Henry as she ask him what was going on as her eyes widen as they were about to enter a room with door to the exit as she sees the ink raise and out from the ink there was Bendy the creation that her joey Sammy and Henry made as she was frozen in fear as Henry grabbed her and throw her over his shoulder as he runs into another room and closes the door behind them as he puts her down and looks at her as she was still in pure shock as her eyes widen more. Henry sees this as he turns he sees “mother” looking down at him with her pure black eyes as he raises his ax as crystal blinks and snaps back to reality as she sees “mother” as she blinks and tell Henry to not to hurt her that she kinda summoned her with the pentagram that Sammy used. As they were talking “mother” was standing there quietly as they then heard a noise of a can as it rolls over to them. Henry gets in front of crystal as Henry says “i know you are there come on out and show yourself.” As he said that their eyes widen as they sees coming around the corner, Boris the wolf.

The Character Design was made by me @ GeekyGirlHeather
Coloring was done by the wonderful and talented @ http://loulabeiie.deviantart.com/
I just want to say thank you so much Lou for coloring "MOTHER"