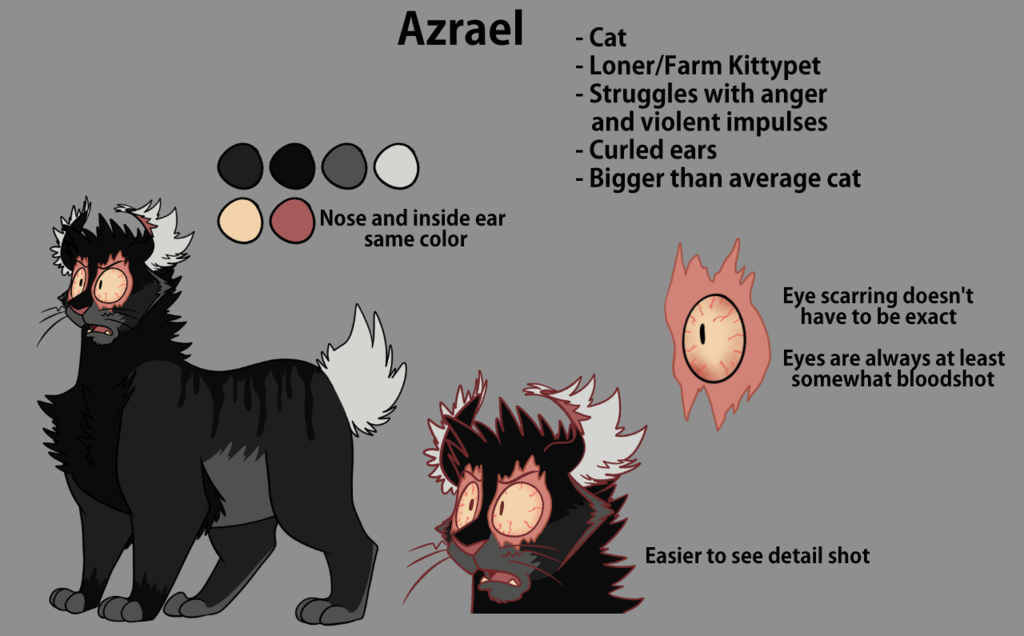 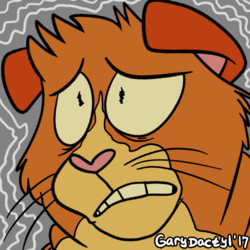 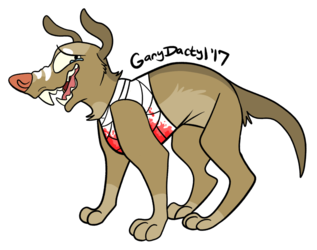 Name Origin: Means angel of death, had gothic/eccentric owners before leaving the kittypet life
Character Type: Warrior Cats Self Insert
Pronouns: He/Him/His
Breed: American curl mixed with maine coon
Affiliation: Loner/Farm Kittypet (like what Barley and Ravenpaw are)
Personality: Paranoid and weary of everyone similar to comet but experiences a lot more anger than anxiety
Home: A horse farm

Azrael struggles with anger issues and violent impulses (none of which he's acted upon). He can generally cope with both fine enough but ended up clawing at his eyes during a particularly bad episode.

He originally lived with his first and only owners who treated him very well and gave him all the space he needed. As he got older he started experiencing prophetic dreams (similar to the kind firestar and brambleclaw have had) which only heightened his already terrible paranoia issues. As his paranoia got worse so did his anger and violent impulses so he decided to separate from his owners. He still misses them a lot but after meeting comet and spending some time on the farm he definitely feels he made the right choice in leaving.

While out and about trying to find a permanent place to stay he stumbled upon the various clans and had even convened with their medicine cats to discuss the prophetic dreams. Unfortunately his prophecies have all been fatal and couldn't be helped. After awhile the clan cats started to realize this and decided they didn't want his help anymore and even met him with aggression whenever they crossed paths with him. This leads to him being very aggressive in return and eventually causes him to meet comet who he saves from being harassed by unknown clan cats. Comet, thankful for the help, offers him a place at the farm to stay and the rest is history.

He likes to still visit his old owners from time to time when he's having a fine enough day to do so. They still welcome him into their home and give him the same amount of freedom. He spends 90% of his time on the farm with comet and the horses at the farm however. Other than visiting his owners he likes spending time with comet whether they're chatting up the horses, hunting or sleeping.

Him and comet help each other out with their respective mental illnesses. He helps bring comet down from anxiety attacks and comet helps him healthily cope with his anger and violent impulses. Being through as much as they have in such a short amount of time has given them a tightly knit bond that they're both extremely thankful for.