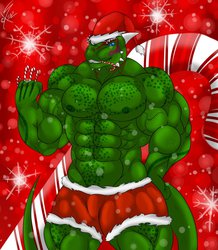 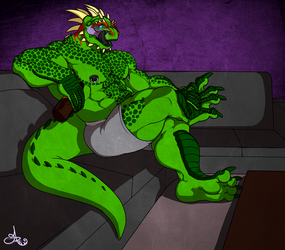 This commission was from the awesome   neodokuro /  neozcommish. If I remember correctly, it's a collab work from her and her sister; Neo did the line work while her sister did colouring.

So without further ado, allow me to introduce you to my Champions Online character, Mystwing!

As you can see, he's a demon, now you may be wondering why a demon is going around saving the world. Well, he wasn't much for typical demonic behaviour anyway, while his considerable power deterred other demons from trying to kill him, his wiser and benevolent behaviour was a cause for Infamy in the Netherworld.

Mystwing fully defected from Demonic hierarchy when the overlord he served as a personal guard to had attempted to enthral a Proto-path (in Champions Lore, a Proto-path is a psychic individual who can reshape reality with their powers), in order to use their power to reshape the Netherworld, making him the only overlord, which would lead to one of many possible ways for the universe to be torn apart. He took the proto-path out of the netherworld and was then allowed to remain on the human world, he chose to cast away his past and start using his powers to protect his new home.

From the top of his head to his feet, Mystwing is 8'01", from tips of his horns to feet, He is 9'03". The alias "Mystwing" obviously references the fact he can fly, but also draws from two other things: "Mystic" due to him possessing magical ability, and "Mist", which refers to the fact that he is classed as a "Demon of Pestilence", he is capable of creating various toxins, poisons and chemical concoctions biologically, and can expel them via breathing, biting, clawing, or using his magic to expel them as bolts of toxic energy, he can also use his magic to expel the chemicals as a thick smog, fumes or faint mists. The strength of the chemicals he can create vary from mostly non-lethal stuff that behaves a bit like tear gas, to stuff so horrifically toxic that it can kill normal people in minutes just by breathing a small amount of it in, or can melt clear through some of the most chemically resistant materials known.

Mystwing's other known traits include:
-Superhuman resilience and durability (not invincibility), coupled with the ability to regenerate from injuries very rapidly.

-Physical strength is formidable, but is not considered superhuman when his height and muscle mass are taken into account.

-tail is prehensile and fully mobile, can be used like a whip or can lance tip at opponents.

-Wings are agile and have a wide range of movement, very useful to aide in scaling walls when flying is impractical or impossible.

-Capable of short "teleports" to rapidly close in on a target

-In close quarters, Mystwing can drain the life force of a target, further aiding his survivability; this power is incredibly potent if the target is afflicted by a chemical or toxin Mystwing created.

-can use his magic to create a barrier to block incoming attacks, but this immobilises him, this barrier then sheathes his body for a few seconds when he stops maintaining it, but his powers are weakened for the duration.

-can produce antidotes to his own toxins, as well as to some other poisons.

-Heal-blocking: If he is affected by a power which reduces or prevents him from healing, he won't be able to hold out in a long-lasting fight, he is resilient, but not invincible.

-Wards: Someone standing inside an active warding circle cannot be harmed by Mystwing. While he cannot directly break the circle, he can indirectly break it using something in his surroundings if available, and if he has time to.

Mystwing isn't his real name obviously, but demons very rarely make their names known, usually it's only the head honchos. However, some of his closer allies have been overheard referring to him as "Kaal", which indicates he trusts them enough to reveal at least part of his name.

Extra info: back of his wings are black.

Fun fact: When Mystwing is happy and in the company of friends, he has a habit of breathing out a wispy purple smoke from his nostrils, this smoke is totally harmless but smells very pleasant, usually smelling of lavender or saffron.