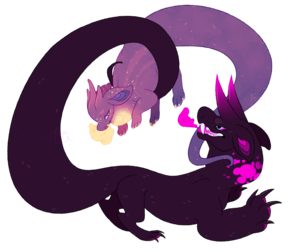 Fumis are a closed species, meaning you may not make your own. Customs are currently closed.

I haven't posted on Weasyl in a while, I'll go ahead and show you guys this idea I have for a holiday fumi breed! Input, suggestions, ect are welcome!

I'm not sure what I'll do with this one (keep it, sell it, give it to a friend) but I probably won't decide at least until the first day of December.

It's ACA imbued object is disguised as a bit of holly (only one of the ones on it's body is the true object). It has fawn-like markings, a single pronged horn, and vibrantly red eyes/tongue/inner flesh and blood.

I'll recap the information I wrote in that journal about them:
"Aether is a really strange substance that does really strange things (oooo mysterious I know) it's involved in the anatomy of every creature that lives on Eremus (fumi home planet) in some way. In a fumi's case, it runs in their blood stream (helping them regulate body temperature) and is what allows them to produce their vapor (either good or bad vapor). When a fumi is introduced to a high concentration of aether (say, a chuck of crystallized aether surgically placed inside them, or super concentrated liquid aether rubbed across their skin) it fricks up their DNA really badly, usually fatally. A fumi with really strange abilities and anatomy can be produced through experiments involving aether mutation, but it has a very high failure rate and is very dangerous.

When fumis were actually taken from Eremus, they looked quite a bit different then what the public sees today. They were mostly brown, they had much more restricted markings/feature variations, they were less fat and more heavily muscled (probably because they lived in the wild and not as pampered pets though) and they were a lot more aggressive and intelligent. The fumis the public knows today are actually results of aether mutation experiments, ESPECIALLY the colors, which were successfully passed down to the offspring without too many issues."

Snow fumi are the successful(?) result of aether experimentation, although they are highly dangerous if not handled correctly. They are lab-grown fumis with very high concentrations of aether INSIDE THEIR BODY, like a chunk of it, damn. Although this high concentration gives them the ability to 'fly' and other perks, it also makes them highly unstable. To stabilize their volatile powers, they are given objects that contain an aether controlling agent (ACA) cleverly disguised as holiday themed items, such as a snow-globe, wreath, mistletoe, ect. Without their ACA imbued object, they will lose control of their powers, this is characterized by white fur growing all over their body, ferocious black teeth growing in (they don't have any teeth normally) and the whites of their eyes turning black, they basically become abominable snow fumis.
Other characteristics
-deer/reindeer-like markings and colors in their normal forms
-uniquely branching or pronged horns, antler-like but still covered in skin like a normal fumi's would be
-area around the ankles are thick and paws are wide. Middle two toes on each foot have very hoof-like nails
-their smoke sacks do not inflate or deflate (and they only have the full type smoke sack). The vapor they produce in their regular forms is always white (it looks like breath in cold air) and smokey black when in their abominable form.
-they may have fur, normal fumis absolutely do not have fur

Again, I'm still open to suggestions for different objects to use, please see this poll here as it contains a list of what's already been suggested and considered!

For more fumi information:
Fully written guide with links to all visual guides within
Species rules of ownership

Art, character, and species belong to me. They are a closed species!