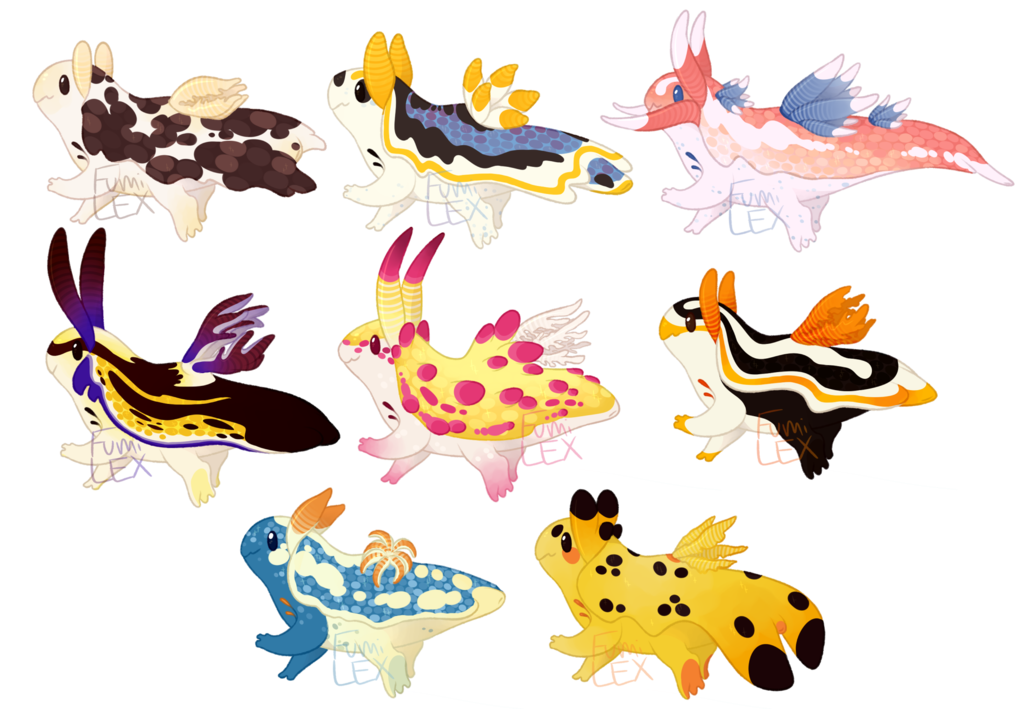 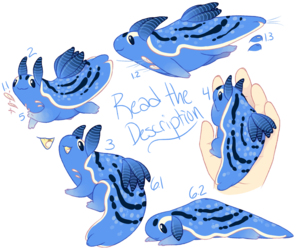 Some of you might recognize these! this was my first submission with them, you can see here that I actually redesigned two of them!

THESE ARE BABIES
they are the larval form of a bigger creature, which is still a WIP and I may keep them hidden from the public because they are very close to my heart and I'd hate if they got copied or anything. The designs as a whole are actually a rework of a previous design I made here, it was going to be a fan monster for the monster hunter series but I never finished it hahah

The holes on their chest can squeeze shut or dilate, the little critter sucks water in and squirts it out from a hole on the tip of it's tail, propelling it through the water away from danger. By keeping the chest cavities open and filling with water as it's propelled, it can move easily through the water with little effort. They have a pretty low metabolism. The mantle (squishy top part of their body, hangs off a little at the edges like a little cape sorta, nudibranchs have these yeh) usually have iridescent spots, they are very shiny. When the critter grows into it's massive adult form, the spots do not grow in size but in number, so at a distance the mantle looks extremely iridescent, but is actually covered in small iridescent spots which can be seen close up.

They live on the same planet as the fumis (Eremus) which I admit I haven't shared much about. To abbreviate things, just imagine a planet with a crystalline surface, covered in a very deep layer of water, covered in hard-packed dust, covered in not-so hard-packed dust, with a very thick atmosphere that blocks out all starlight but produces a light of it's own, when the sunlight hits the surface of this atmosphere, the particles absorb the thermal energy and fall as warm dust-snow. It is a weird place. Where the water seeps to the surface, it is very fertile and covered in all sorts of life, this is also where the fumis live. These levi critters live in those shallow waters where the underground ocean seeps up, but they descent into the ocean as they grow massive (just ten would probably take up the whole oasis idk) I'm not sure what they feed on down there, haven't decided yet mm, but it is not dark, the planet's true crystal surface actually produces it's own light as well. WEIRD WEIRD WEIRD WIP JUST IGNORE ME

This is obviously a closed species, I'd even go so far as to say a PERSONAL species since I don't plan on doing adopts or anything, definitely never doing adopts of the adult forms or letting people age them up if I do decide to make adopts, there would just be too many rules.

art, species design and all concepts within belong to me, please do not take or copy them