The Experimentals Sample Study by Frostbyte 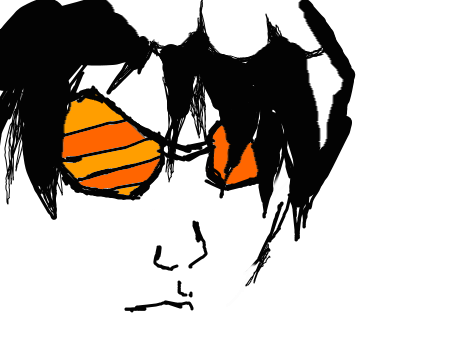 So first off... It was totally dark.
Like, pitch until you saw a lamppost.  The lamppost wasn't even that
bright.  I wouldn't tell anyone else, but I was spooked.  The guy in
front of us didn't even seem phased.  It was creepy.

They wandered the street almost aimlessly.  It seemed pointless
because there was practically no one around.  In an attempt to look
inconspicuous, Mason held his head up to make it look like he actually
knew where he was going, and like his independence from the guy leading
was clear. It was not.  They meandered around, looking at the few
occasional passer-bys.  Mason started wondering himself why he was out
so late in the night with a creepy dude who claimed he had a way of
collecting information.  Jason shuddered next to him.  He hadn't brought
a jacket.  They stopped by a lamppost for a short while, the guy
looking onward.  Mason gave his friend his jacket, and leaned up against
the post.

The shining lamppost made a little orb
of inconsistent white light above their heads, barely illuminating
anything around them.  Mason tapped his arm with his hand, then stomped
his foot with impatience.

“Well, you gonna provide, or has this been a humongous waste of time?”

“You're going to have to wait if you expect results.”

A shadow darted about behind them, unseen by all of them, until it bumped into Mason's rear.

At that moment, the small, shady figure took off running down the street at an immense speed.

“What--” Mason felt his back pocket. “That thing took my wallet!”

Jason was first to fly off his feet, charging into the darkness
surrounding the post.  Mason then ran, then the young man after.  The
thief's running got the better of Mason and Jason, until Mason's metal
legs shot out from his back, and he briskly mounted them.  The kid was
running so fast, he couldn't see Mason's legs- or the new speed at which
he was now catching up to the boy.  The kid jumped into an alleyway,
and Mason had just enough time to stop and retract his legs into his
back before running into the alley.  He couldn't risk anyone seeing
his... abilities.

The others caught up just in time
to enter the alley together. “Better give that back!” Mason shouted
into the darkness.  They heard a rough scrabbling against a wire fence,
to find a young boy mounting it.  Jason grabbed the boy roughly by the
scruff of his hoodie, and pulled him down with a rip of fabric.  The
child landed on his rear, and backed up against the wall protectively.

“W-what do you want??” the boy stammered, reaching for his back.

As the boy was turning to grab the wallet, a flicker of a tail shown
where his pants had fallen slightly.  Seeing this, Mason fell silent.

The kid scuffled up against the wall, about to run, but the dark man grabbed him.

“What do you know about that Monster? Tell us NOW!”

The
boy looked mortified.  He was poor, he couldn't have been older that
twelve, and this guy was roughing him up like an adult. I had to step
in.

Mason shoved his hand between the man and the boy.

The shady man, still clinging to the boys shirt, replied right in
Mason's face, “All our work is about to pay off, if I can get a word
from him.”  His tone turned sour and sarcastic. “Now why don't ya sit
back, relax, and let me handle this.”

The shady man assumed his hold on the kids shirt with two hands and resumed his inquisition.

“Your tail. What do you know about the man who gave it to you?”

The little guy shuddered, and I couldn't help feeling bad for him, but I didn't know what else I could do.

“You know who!”  The young man drove the boy's back against the wall.

The shady man eased his grip on the boy's shirt, and let him down slowly.

The boy sat there stunned, and a tear shimmered as it fell off his cheek.

It was almost as if the kid snapped into reality again, and stammered, but he was too slow.

“Cough it up!”  The furious man stomped on the fuzzy tail of the boy on the ground.

There was a sickening crack as the boot hit the floor, with a tail beneath it.

“Auuuugh!”
He screamed, alerting anyone in the area that there were people
around.  His gray fingernails glinted in the dim light, carving deep
lines into the concrete below them.

“The building was at the edge of the city!” he sputtered. “They took me in, and I can't remember what they did!”

The man released the tail from his foot. “Good. Very good.” He was
smiling with glee, as if he'd found an old, lost item of his.

This is too much.

“Up you go.”  He picked the kid up by his backpack, and tossed him at the tin garbage cans lining the building.

Mason had moved to intervene, but he was not fast enough.  As the
shadowed man straightened up to walk out, he felt a hand clutch his
shoulder.

The young man roughly shook Mason's hand off of his shoulder and turned
around casually, spotting the looks on Mason's and Jason's faces.

“We got what we needed. Now let's get out of here before someone noses around.”

The look of surprise on the man's face was visible.  “What did you say?”

Jason patted Mason's shoulder and cocked his head.  Mason spoke to the
shady man while his eyes stayed trained on Jason. “No reconsideration.”

Turning his head back to the man, Mason saw his look of surprise
turning to a smile, a deep, dark smile.  He broke eye contact with
Mason, and backed up slowly to be swallowed by the shadows.

“I'll have my way- with or without you.”  Resounding footsteps told the
remaining duo that the man turned and walked off into the blackness.

They turned to the boy among the garbage heaps, and Mason couldn't help but ask “Are you gonna be alright?”

The boy's hood had fallen back, and for a brief time, both could see
his facial features- his enlarged canines, his scarred neck, his fearful
eyes.  He looked like a scared and endangered animal, cornered, before
grabbing the fence, throwing himself over it in one bound, and charging
off on all fours.

They
stood there for a minute which felt like an hour, none of them daring
to speak, each drifting in their own thoughts.  When they felt that they
had both restored all connections of reality back to each other, Mason
opened his mouth to speak. 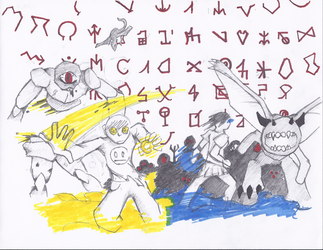 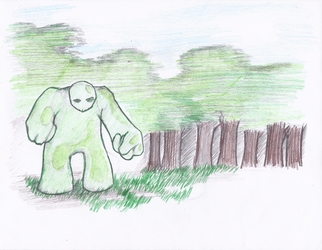 I was just doing some concept stuff for a comic I'm developing.