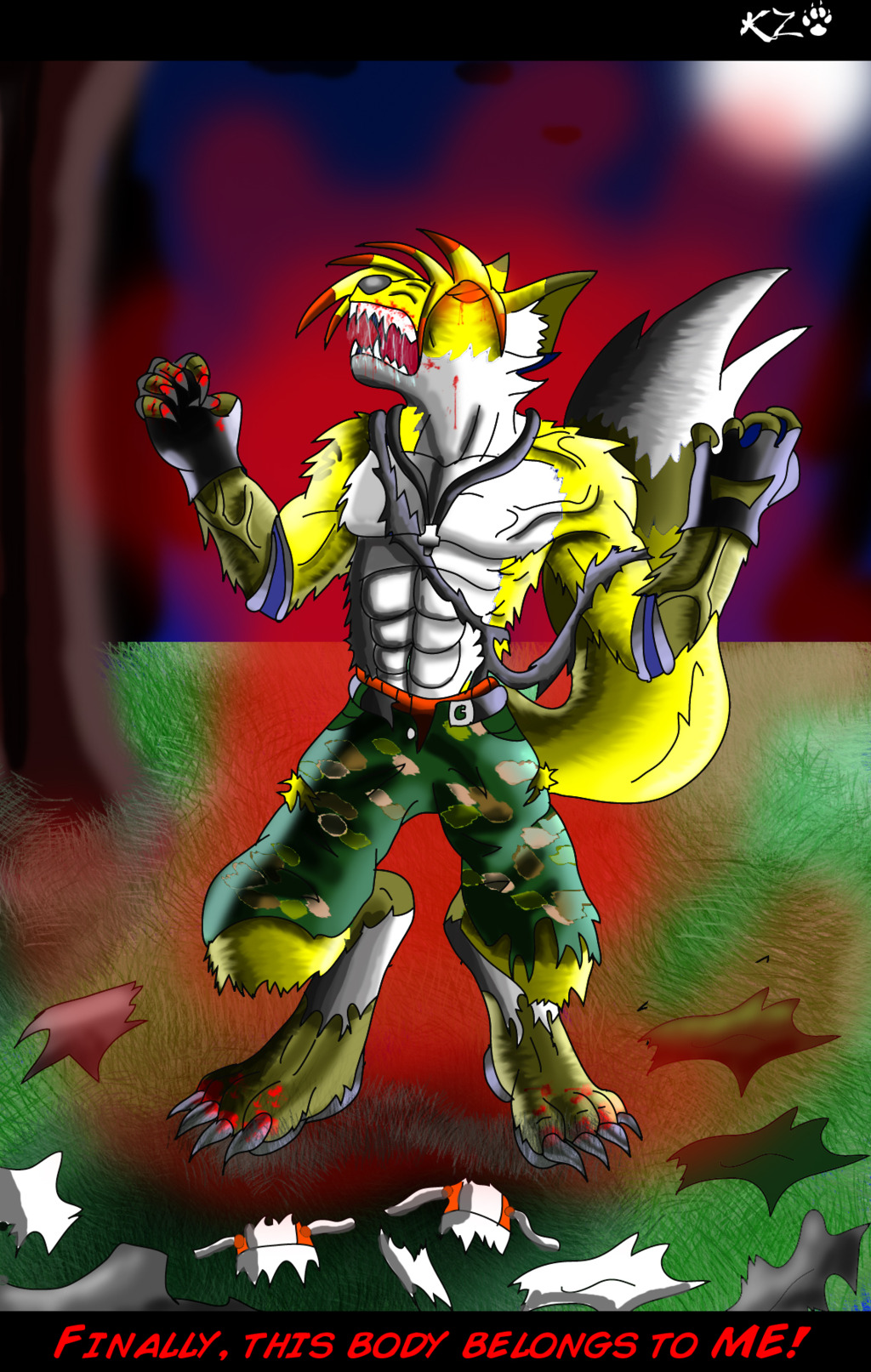 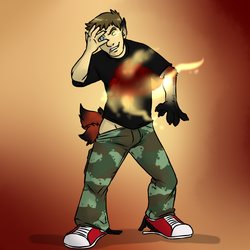 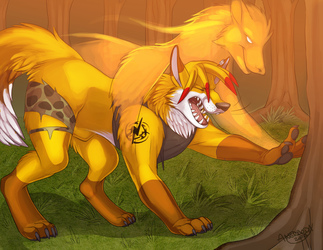 A possessive transformation picture this is so unlike me......... not

This awesome gift art and little story was done by :iconkzmaster: all credit to him and a huge thanks to him ^_^

Legends tell of an evil fox spirit, filled with malevolent intent, who roams the dark forest around midnight. Stories say the fox has the ability to overtake one's body, integrating into it, and then sealing away the hosts' mind forever and when it does, it will bring death and destruction on whomever crosses it.

In ancient times many travelers avoided going into the forest at all cost, often calling it cursed or haunted. Many years passed without anyone setting foot in it, and those that did never wanted to go back.Overtime the dark forest grew into a beautiful landscape and the legend became mere superstition because after all, no one had ever seen the evil fox spirit. People began to believe it was just a hoax or a silly story passed from generation to generation to scare small children.

One night a young man out hunting with three friends suggests that they should venture into the forest. Everything there was fair game and there had to be plenty with hardly any hunters going there. His friends are reluctant but ultimately decide to go. There in the forest they spend more time exploring it rather than hunting and soon the young man finds himself separated from the rest of his group. No worries, he'd catch up with them eventually. Occasionally he looked around, feeling as if something was watching him. After a few minutes of walking he came to a large clearing in the forest where a large boulder with a symbol on it was. The symbol glowed a bright red. The young man was very curious, he'd never seen anything like this before. He slowly walked up to the relic and reached out to it. Upon touch, the glowing symbol shot out a bright flash and a stinging sensation shot through the young mans hand.

He let out a yelp and shut his eyes after being stunned by the bright flash of light. He fell to his bottom.

Upon opening his eyes and couldn't help but yell feeling immense pain in them. Blood begin to fall from his hands but the pain from it was overwritten from the skull splitting head-ache he had. He clenched his sore eyes, which began to bleed, and gritted his teeth that were beginning to grow sharper. What was happening to him!?

He yelled for his friends, not being able to open his eyes. Razor sharp black claws uprooted his nails and a sea of brown fur begin to spread up his arms. The tips of his finger and his palm pushed out, ripping through his finger-less gloves, forming paw pads.

All he could feel was anguish when his muscles expanded. The shirt was beginning to constrict him, only adding to his pain. He turned over, now on all fours, and clenched his stomach. He coughed up blood as his internal organs were shifting around, pushing against each other and growing.

His spine snapped and the golden fur shredded through the back of his shirt, revealing new muscle.

He couldn't see anything, he could only feel the agony he was in.

His shoes literally burst in half revealing new black claws and paw pads. The same brown fur covered his feet and legs and once it reached his knees, now canine-like, they turned into a golden color. He yelled once more, a growing bone was forming in the back of his pants. He fell to his knees and elbows, screaming through his gritted teeth as the bone pressed up against the base of his pants. He could hear his pants giving in and soon, after a massive rip sound, a large new tail had formed.

He couldn't believe what was happening to him, all this pain was unbearable. Suddenly his face cracked and it began to push outwards. He yelled feeling the fur cover his entire body. The pulsating headache in his head seemed to double in strength as his face pushed out. He screamed in agony feeling new canine teeth form in his mouth and his tongue stretching out, lengthening. His ears stretched themselves into a point. He opened his eyes glowing red eyes for the first time and cringed as his headache only worsened. He couldn't focus on anything but the pain he felt and that was when it happened. His mind snapped, not being able to withstand this new body, and the demon fox that had entered him officially took over, sealing the man's mind away.

The demon fox snarled and drooled, it's feral nature revealing itself to the world for the first time in centuries.

It roared a ferocious roar of dominance, pleased with it's new body.

Suddenly there's a rustle in the bushes and one the young man's friends came through unaware that his friend was long gone. The demon fox took one look at the man, snarled, and then darted right at him.

A New Age had begun.