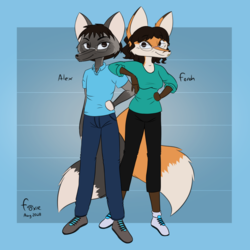 Copy/paste from the NSFW version. :3

Something I did between commissions. Actually, I needed to consolidate my Bunny OC design, although I'm still deciding some stuff about her, like the color palette (which I'm mostly satisfied with) and clothing (I'm still studying it, though. I tried to picture the "kinda formal" attire from that sketchdump, but I'm still trying to decide which style would fit her better).

Oh, and I ended deciding her name, too. I really don't have idea of why to use a Portuguese-sounding name, but it fits her really well and still creates some interesting contrast with how the names from the other characters sound. So, if there is some girl called "Bruna" who happen to also have the surname "Coelho" in the house (which are very common name and surname where I live, I must say), don't worry. It's just a coincidence and there's no real people involved in the creation of this character. ^^

More to come soon (I hope).