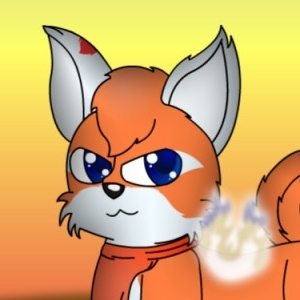 Crickets chirped as an orange fox snuck by, his three tails swishing behind him. Ahead lay a house within a mountain-side, where his friend lived. But his goal for the day wasn’t to meet with him, but to get inside without his friend knowing. That way, he would get the special potion within.

There the kitsune waited outside, looking at the door, waiting for his friend, who was also a three-tailed kitsune like him, but red with a pink underbelly and a white A on his back, to come out. The orange sune, named Chris, watched with dark blue eyes at the door, his fur bristling with anticipation. If he succeeded, there would be loads of fun for the next 24 hours. But, if he failed, all of that fun will be directed back at him, and that will be no fun.

His ears twitched, detecting a doorknob turn, and, with quick movements, hid behind a tree trunk.

Soon the door swung open and the red kitsune, named A-Fox, stepped outside, his black ears stood up and alert. His sea blue eyes looked all around the area, them looking at every shadow that lay on the earth. Though he saw no one, he closed the door behind him and, with his tails, locked the door behind him. He then walked down the road, his stomach growling.

A minute passed, and Chris flopped down onto the ground, his back legs sore from standing up. He then sighed in relief before he walked towards the locked door. His eyes skimmed over the doorknob, sensing an enchantment within. From the feel of it, Chris thought as his tongue felt swollen by an illusionary strawberry taste, the enchantment is meant as an alert for A-Fox if anyone but him tries to unlock the door. The orange kitsune then gave out a foxy grinned before his own tails hovered over the knob, with them shining a light at the keyhole. Soon, the doorknob turned, slow and steady to not trigger the spell within. Then a clicking sound echoed, and the door swung opened inwards.

Chris grinned wider while his mind echoed a reminder that it was just the first security he met, and there was bound to be more than just that. His dark blue eyes then looked within the first room, observing at every corner of the room. He then shook his head, having seen no more enchantment, and raised one of his white paws forward before a thought struck him. He then looked up at the door frame above and saw a red glow above.

He grinned wider, recognizing that particular enchantment as a fire test. Both Chris and A-Fox are fire kitsunes, the orange kitsune noted, so it makes sense that he will make sure that one who steps in is one themselves. His throat felt the tingle of fire before he opened his mouth and expelled fire at the enchantment.

The fire met spell, and it turned green.

Chris blinked as his heartbeats quickened.

Of course, A-Fox would make sure that a fire kitsune who would be able to sneak would be capable of green fire, which Chris is incapable of, he realized.

Still, Chris thought as he arched his back and his back legs flexed, there was one solution to this.

He sprinted within, passing the doorway as the enchantment flickered multicolored lights. The orange fox’s eyes widened up as he sprinted further, knowing that A-Fox will realize that there has been a break-in and will turn. But then, as long as he got to the potion within, everything will be fine.

He sprinted through another doorway, his heart beating faster as his teeth gritted as he entered into a hallway. His legs felt sore, his head felt light, and his nerves felt fried, but still, he ran. He looked within any doorway along the way, looking for that potion, but there was none.

Until he got to the other end of the hallway, that is.

There it sat in the middle of the room in the middle of the table. The potion, with the container embosomed into the shape of a crystal, glowed with purple and black mixed together. His eyes stared at the potion as his mouth drooled in excitement and joy. His eyes skimmed through the room, but he detected no traps and spells within. As such, he stepped in.

Chris hopped onto the table itself and picked up the potion. His eyes glimmered with greed as his tongue licked his lips. He then popped open the potion—

“What’s going on here?” a voice coming out from the hallway said. Chris’ eyes shifted at the door and emitted a dramatic flair as A-Fox stepped in, his eyes wide with fear. “Oh, no. CHRIS, DON’T!”

Chris drank the potion, the tasteless liquid flowing down his throat that somehow felt warm.

Chris grinned wide as he felt every part of his body down to the cells feeling a spike of energy that increases by the second. His fur stood up as his tails hypnotically wagged behind him, with them splitting apart into nine tails. His fifth tail stood out as a blueish-grey rode formed around it. It soon tied itself up in the Obi style, ending with a silver bell forming on it.

His back, which had a red four-sided diamond on it, burned with white fire as his eyes glowed, feeling more and more power filling him up. Soon, almost through instincts, a leather cloth formed in front of Chris that ends with beads. It wrapped itself around Chris’ neck as if it was a yodare-kake as he grinned with overwhelming pride.

Yet, power still filled up Chris, enough that even his body couldn’t contain the overwhelming power of a deity. Yet he murred, welcoming any more power that comes with being with a deity since such a problem isn’t an issue if one knows how to fix it.

His eyes returned to normal as his body soon grew in size. The orange deitysune, once a mere two feet tall, soon doubled in height to four and again to eight in a few seconds. The table below him creeks under his weight before it broke into several pieces. The deitysune body soon encompassed the entire room, his tongue sticking out in cheeky joy, as his head met the ceiling and it cracks.

A-Fox, who stood there mesmerized by his changing friend, soon regained his grip on reality and ran when he realized how much the orange deitysune grew. His eyes widened as he kept on running, the floor breaking apart under his feet. The red kitsune ran out of his house, his heart feeling like it was about to explode from nerves and fear, and he flopped down onto the ground twenty feet away from the door.

The ground then shook as A-Fox felt sweat forming around his body. He then turned back and saw huge cracks on the mountain itself, with crackling sounds. A huge tail then burst out of the door and, with a swing, broke the mountain even more. Soon, an orange muzzle burst out from the mountain tip as if it was erupting, with boulders flung around the area. The deitysune laughed so that it echoed for miles away as he kept on growing, the mountain shattering into pieces as if it was sand.

A-Fox’s eyes widened at the sight before he turned and ran, despite his protesting heart. The trees fell around him as he sprinted around them, his legs sore and his mind clouded. But then he felt his paws leaving the ground itself. He gave out a mighty yelp as he felt pulled back to the deitysune himself, who stood at 100,000 feet as the smallest he could be.

Chris grinned at the tiny A-Fox, who whimpered like a puppy. The entire universe is nothing more than his personal playground. With his powers, he could do anything he always wanted to do as A-Fox got lifted up to his eye level.

“Well, well, well,” Chris said in a soft voice. “I guess you should hide your stuff better. But now the fun really begins, buddy, and it starts with you.” Here's the second of the two shorties I wrote. Technically, this is the first I wrote, but I like to keep up with continuity. XP

Chris and icon belong to